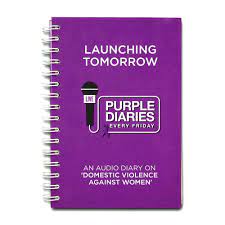 India has come a long way in terms of fighting social evils. However, much to our dismay, women fall prey to domestic violence even now and choose to remain silent fearing societal prejudice or other serious repercussions.

To combat violence against women, Hyderabad City Police in collaboration with Bharosa, Hyderabad has launched a new initiative named #PurpleDiaries. It is a one of a kind audio diary to encourage victims of domestic violence to speak up so as to sensitize people and build a collective consciousness to curb this social evil. Bharosa is a support center initiated by Hyderabad City Police to support women and children affected by violence.

The Optimist News got in touch with Shikha Goel IPS, Additional CP Hyderabad Police (Crimes and SIT) who is also in charge of She Teams and Bharosa Centers, Hyderabad to learn more about this initiative.

The Bharosa support centers offer assistance to victims of sexual violence, child abuse and domestic violence in an integrated manner through legal, medical, police and psychological assistance at one stop. They also conduct awareness programs. “Owing to the pandemic and the subsequent lockdown, conducting physical awareness programs at the Bharosa center seemed unfeasible. So we thought of launching something on social media to encourage victims to come out and share their stories. Usually in social media we put up a poster or a video. With #PurpleDiaries, we wanted to initiate a conversation on domestic abuse to encourage women to break their silence and come forward.”

The Purple Diaries initiative aims to use the power of social media to be vocal against domestic violence. Purple Diaries feature women from across various sections of the society and stories are broadcasted on social media every Friday. “If you wish to share your story you can either voice record it or write it down and send it to us on our social media platforms with the handle #PurpleDiaries. If you have a story, we will provide you with a platform where you can get an audience and of course support,” Shikha Goel IPS said at the launch of this initiative.

Purple Diaries has already received overwhelming response from netizens. “Many victims are calling us up and sharing their stories. Many of them are not from the Hyderabad City area. We are trying to link them with the concerned centers,” informed Shikha Goel IPS.

Why do you need to speak up

The police can take action when an offence takes place in a public space or in public view. “But when it occurs within the confines of the four walls, help cannot be extended unless the victim talks about it and comes forward. This initiative helps victims to share their story,” Shikha Goel IPS explained.

“In a large number of cases the victims do not share the perils even with their family, friends or parents. If you do not talk about it, there are no ways to get help,” she informed.

Sharing one’s stories helps the victims connect with each other. “When you talk and hear other’s stories you realise that there are other people who have gone through this trauma and have even managed to come out. It also gives courage to other women to come forward and share their experiences. So it is like helping each other to take control of their own life rather than leaving it at somebody else’s mercy,” said Shikha Goel IPS.

One should realise that the victims’ marital lives do not come to an abrupt end when they come out to report. “There are many cases when after counseling victims are able to have reasonably peaceful marital lives later. In other cases they get involved in other activities and move on with their lives,” Sikha Goel said.

In a patriarchal society, fighting social evils like domestic abuse, calls for mass awareness. “All social evils have come out of different reasons- political, socio-economic, psychological or traditional. Besides, other than taking strict legal actions, another powerful way to curb these ills is to create awareness which will prevent women from falling prey to domestic abuse to a large extent,” Shikha Goel explained.

Moreover, starting a conversation helps to create and ensure an equal society for the future. “The young generation will be more aware of how to treat their spouses in life. Young girls will know what their rights are, will be able to differentiate right from wrong and will be more acquainted with their legal rights and remedies,” Shikha Goel stressed.

Bharosa Hyderabad has also started a ‘Forward to Save’ or #F2S campaign. “Under this initiative if any person is aware of someone who is undergoing domestic abuse they can encourage her to come out and help her to report. It is about involving everybody to help out victims,” Shikha Goel IPS explained.

Contrary to the perceived notion that incidents of domestic violence are restricted to less educated or lower middle class, Shikha Goel informs that this crime is prevalent across classes, though the reasons might vary for why it may have happened. “Victims do not come out to share their stories for diverse reasons. Even people from higher echelons of the society who are well educated and even financially independent women often do not show the courage to break their silence and report,” she informed.

However, it is encouraging to note that there has been a marked increase in women from all sections of society coming forward and reporting crimes. “Increasing awareness and education have helped in reporting more crimes. However, there is still a long way to go,” Shikha Goel expressed.

The virtual is the reflection of our physical world

In the digital age white collar crimes have increased. Similarly, crime against women has changed its medium as well. Many women receive virtual threats and are harassed online.

“Whatever be the nature of crime it changes the way the society moves forward. Cyber crimes are increasing now on account of technological advancements. We shop online, bank online, matrimonial pages are online, and we also work online. So crime also shifts to the medium most used,” Shikha Goel explained.

“Virtual space is just a reflection of our physical world. We need to take precautions and be careful whether it is the physical or the virtual world,” she advised.

Shikha Goel, a 1994 batch IPS officer, has been awarded the President’s Police Medal for Distinguished Service this year. While sharing her experience in fighting crimes against women as a woman herself she said, “Being a woman it becomes easier for me to understand the psychology of a woman victim. It is also easier for the victim to come forward and express herself.”

“I have always seen myself as a police officer first and a woman later, as far as my job goes. As a professional, it is important that you maintain balance and do not play your gender card. It is important to maintain that neutrality,” she emphasized.

While talking about the challenges she faces, she said, “Though the job of a police officer is very demanding and at times there are issues or stories which touch your heart or hinders you to get a good night’s sleep, one eventually needs to accept that is a part of the game,” the officer explained.

It is commonly perceived that women shy away from entering the police force. However, there is a marked shift to this tradition as we see that in recent years many women are joining the force. “The number of women in the police force has always been less. It is heartening that it is picking up now,” Shikha Goel enthused.

Policing is a difficult and challenging job that entails finding a right balance between your personal and professional space. Shikha Goel is lucky that her family has been extremely supportive. “I am still trying to find a perfect work-life balance. My profession is important to me and I have fairly managed to juggle both the roles so far,” shared Goel who believes policing has deeply transformed her as a person.

“It has been a beautiful learning experience for me and has made me push my own boundaries, realize my strength which I never thought I had inside. It opened delightful boundaries of boundless possibilities,” signed off the highly accomplished lady cop.