I believe in cinema for change, says Ayushmann Khurrana 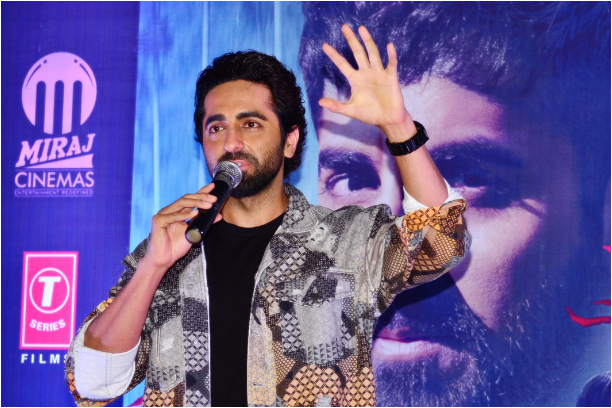 Ayushmann Khurrana believes his new film Anek, which explores North East conflict, will act as a “value addition to the society.” As the actor goes into uncharted territory with Anek yet again, he says as an artiste he has certain social responsibilities and that should be fulfilled in every film. “That’s my way of taking it. I believe in cinema for change. And Anek is a part of it,” says Ayushmann Khurrana, who was at Miraj Cinemas in Kolkata to promote his new release.

If Anubhav Sinha’s hard-hitting film Article 15 took a look at the caste discrimination in India, Anek will highlight the geopolitical situation in North East. For the first time, Ayushmann Khurrana will be seen playing an undercover cop. Shot extensively in Assam and Meghalaya, the film, says the National Award-winning actor is not merely a ‘political action film’. “It talks about uniting the country,” he says.

“Whatever film I do, be it Article 15 or Anek, it arises from empathy… empathy towards fellow Indians, fellow communities or people in general. So, your psyche is prepared in a way. Anek is an important film in today’s time. I play an undercover agent for the first time. It’s a political thriller. It tries to say something. The message is different. It talks about uniting the country,” says the Vicky Donor actor.

Ayushmann Khurrana agrees that though films on North East have been made in the past, probably Anek is the first mainstream movie on the subject. He also admits it was important to talk about “uniting North East with the mainland.” “North East has been ignored since time immemorial. This is the first film where there is a correct representation. For example, Andrea Kevichusa is not just a character but the female lead in the film. In fact, her role is at par with mine. This has never happened before. So if it’s coming from the horse’s mouth like people who have suffered in the North East, I think it means a lot. I think Hindi cinema has aged with Anek because there is a correct representation with 80 percent of the cast coming from North East only. Of course everybody has empathy but if it comes from someone who has suffered, the film holds more weight. If we give a person, who has been the sufferer, the pedestal, it becomes more credible. This is the right way to make the film,” says Ayushmann Khurrana.

The actor also informs how Anek has been an eye-opener for him. Also, Ayushmann felt a lot about the North East people when he was shooting in Assam and Meghalaya. He mentions it’s a complex situation in the region. “We just term them as northeasterns but they are also multicultural, multilingual and they have different tribes. They have so many different languages. It’s also not a unified entity over there because some struggles are going on in Manipur and Nagaland. Anek was an eye-opener for me. A common educated person from the region doesn’t like to be called northeastern. They want to represent their state or tribe and they are very passionate about it,” says the Dream Girl actor.

Ayushmann’s film also brings back the Hindi national language debate. For the Andhadhun actor, every language should be given importance in the country. However, he feels, it’s a default setting that Hindi speakers are more than 50 percent in the country. “But that doesn’t mean people, who don’t or can’t speak in Hindi, should be treated in a certain way. It’s really unfair to ask people, who have never spoken in Hindi since childhood, to speak in that language all of a sudden. So it really doesn’t matter whether India has a common language or not. I just feel the country’s heart should be one,” he says.