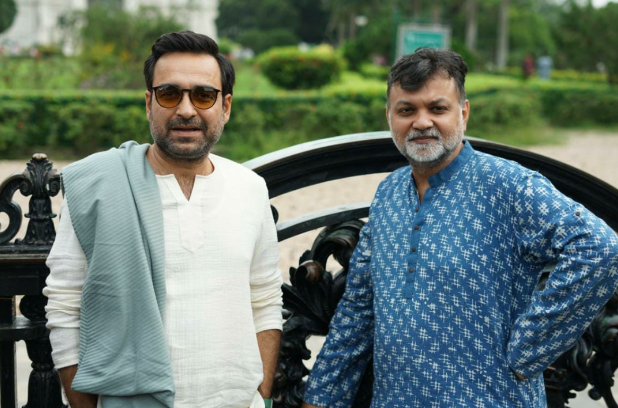 After Sherdil: The Pilibhit Saga, which has been extensively shot in the jungles, actor Pankaj Tripathi confesses he has grown more sensitive towards nature and forests.

A nature lover, Pankaj Tripathi bonded with National Award-winning director Srijit Mukherji on the set of Sherdil on food, films, politics and travel. Also, given both of them are wildlife enthusiasts and love exploring the forests, the bond only grew deeper. So much so that even Tripathi’s wife Mridula made her acting debut in Sherdil. ‘Bong connection’, we say.

Pankaj Tripathi was recently in Kolkata for the promotion of Srijit’s second Hindi film and gorged on puchkas near the Victoria Memorial. He likes anything Bengali and that was evident when he was asked about relishing Bengali food on the set of Sherdil. “Unlike other Hindi films, the food on Sherdil’s set was different. We could gorge on various Bengali cuisine from aloo posto, charchari to kosha mangsho,” said the actor of films like Mimi, Luka Chupi and Gunjan Saxena: The Kargil Girl.

Sherdil is inspired by a bizarre true practice near the Pilibhit Tiger Reserve. The people there used to leave their elderly family members for tigers to prey on and then claim compensation from the government. In Srijit’s film, Tripathi plays the sarpanch of a village who volunteers to go inside the jungle and offer himself as a prey to the tiger so that his village can bag the compensation from the administration.

Having no criteria to choose a story, Tripathi follows his instinct. “I have no format. If I think I like the story, I do the film,” he said. The same holds true for Sherdil.

The Mirzapur actor also believes that love and affection are the two most important things while working. So, it doesn’t matter to him who the cast and crew is. He will give the same importance to the cinematographer as well to the light man.

Tripathi has become one of the most sought-after actors in Bollywood today. However, he still doesn’t believe that it’s the actors who do magic but scripts and stories do. “It might seem we are doing magic because as actors we are playing those characters. But ultimately, it’s the scripts and stories which do the magic,” he said.