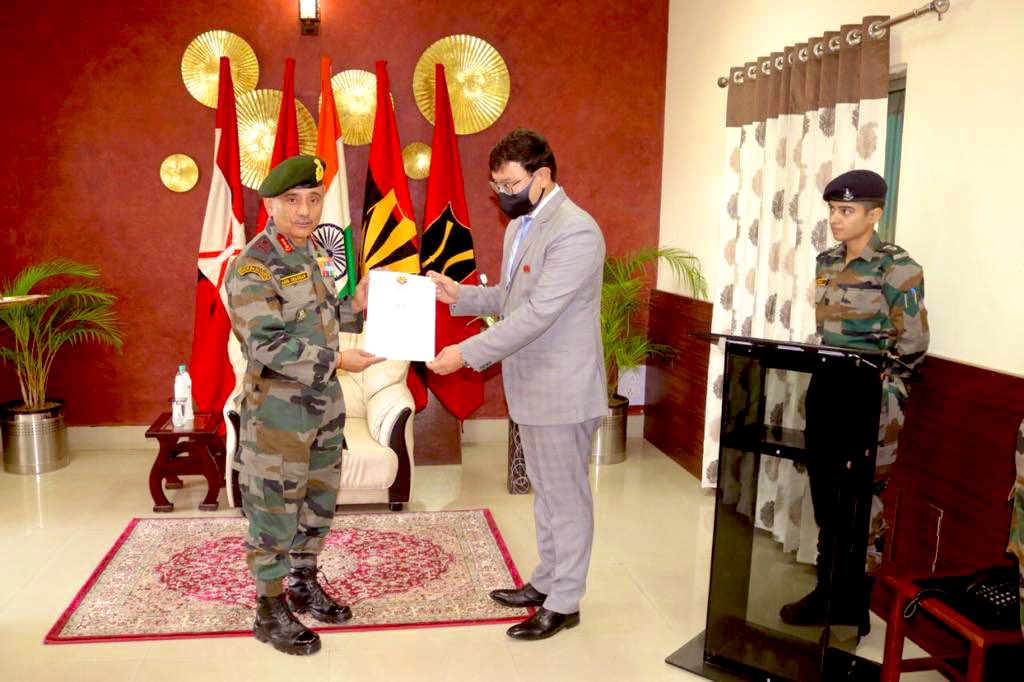 Away from the media glare, some real life heroes live their lives working towards creating a better world. Minga Sherpa IAS, Deputy Commissioner of Dibang Valley, Arunachal Pradesh, is one such. Sherpa IAS has been leading the mission of fostering civil-military cooperation by developing key infrastructure projects in the valley. In recognition of his dedicated efforts, he was recently honored with the GOCinC Commendation Card by Lt. General Anil Chauhan of the Eastern Command.

“It is an award for the entire district administration of the Dibang Valley. All our officers worked hard to facilitate the civil military cooperation here. I feel honored and privileged that our efforts were recognized by the Army through this award,” proclaims award-winning IAS.

It is pertinent to note that the Indian Army or the defense forces in general work in coordination with the district administration of the bordering areas to protect the country from possible external aggression and to further the development process.

Scroll down to know how this idealistic IAS has ensured that the residents and the army personnel posted in his district maintain a harmonious relationship.

Ties with the Army

“The Army is an important partner for us. The bond between the residents of Dibang Valley and the Army is extremely important because of its strategic location. Being a district that shares a 300 kilometre long border with China, it is important that you work hand-in-hand, be it in social development or building infrastructure projects,” informed Minga Sherpa IAS.

Under Operation Samaritan, which is an initiative of the Indian Army to foster the spirit of national integration in the country, the Army conducts many programs in the bordering villages. These include holding medical camps, taking children for tours to military establishments or hiring villagers as guides and porters.

Another critical fact is that although the Army has its resources they are not acquainted with the specific needs of the villagers. This is where the district administration steps in to bridge the gap. “We help them in finding out the beneficiaries and identifying the critical needs through the wide network of our Panchayati Raj Institutions and by talking to the village heads also known as Gao Buras and Gao Buris,” said Minga Sherpa IAS.

On the other hand if the Army has needs like land acquisition, medical help, vehicular support or in cases of natural disasters like landslides, the district administration provides all the necessary help.

In bordering districts, it is important for the people to have faith in the Army. “People in Arunachal Pradesh, especially in Dibang Valley, are very respectful towards the Army. To further this bond we involve the troops and the ITBP in all our activities. Recently, a cricket tournament was organized by the district administration in which teams from the Army participated. Similarly a marathon was also organized for men and women which was co-sponsored by the Army,” shared Minga Sherpa IAS.

Moreover, on Independence Day and Republic Day, the Army participates in cultural programs. Last year there was an arms display by the infantry unit and an artillery drill was also conducted by the Artillery unit that is posted in the district. In the Reh Festival the Indian Army and the ITBP officers actively participated along with the locals. Two senior officers from the Army even participated in the bike rally during the festival in Anini.

“People of the district are familiar with the officers in the Army and know their respective posts,” said Minga Sherpa IAS affirming the close ties of the citizens with the defense forces.

Minga Sherpa IAS has also been instrumental in the construction of a National Highway 313 that connects Roing and Anini, the district headquarters of Lower Dibang Valley and Dibang Valley respectively. “Presently the road between Roing and Anini is narrow and the bridges are in poor condition. The newly constructed highway will enable vehicles to cover this 200 kilometer long journey within 5 hours. It will also help in the transport of vital defence equipment as it will be able to withstand greater weights of nearly 40 tons,” said the Deputy Commissioner.

Development is in full swing in Dibang Valley, with multiple roads being built by the NHIDCL (National Highways and Infrastructure Development Corporation), army engineers and the BRO under the India-China Border Road project. Many micro hydel projects are also underway to provide regular supply of renewable energy to the locals, the Army and the ITBP.

The bordering district of Dibang Valley with limited infrastructure facilities, has crafted an encouraging reality of itself by means of meaningful engagement with the Army and the defence forces. Their strong bond and faith in each other go a long way in catering to the developmental needs and aspirations of the citizens. Minga Sherpa IAS with his team is leading the mission from the front.