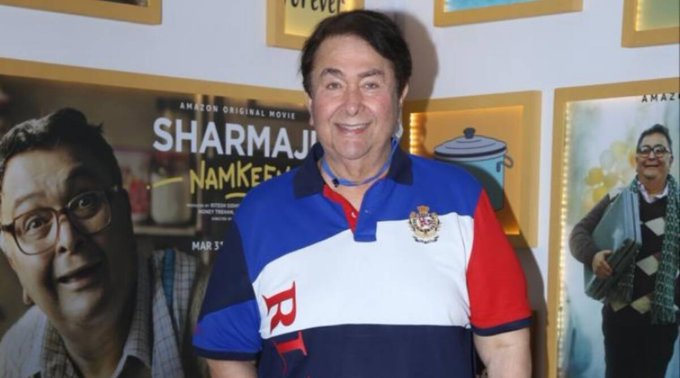 Mumbai: Actor Ranbir Kapoor recently revealed that his uncle Randhir Kapoor ‘is going through an early stage of dementia’. However, Randhir Kapoor has gone on record to say that that was not true, dismissing his nephew’s comment by saying that he was ‘perfectly fine’.

“Aisa kuch nahi hua. Not at all. I am perfectly fine,” he said, adding that he was in Goa recently with filmmaker Rahul Rawail.

Asked why Ranbir would say that he had dementia, Randhir said: “Ranbir ki marzi”, adding that Ranbir was “entitled to say what he wants”.

In an interview with Times of India now, Randhir laughed off Ranbir’s statement and said, “Aisa kuch nahi hua (Nothing of his sort has happened). Not at all. I am perfectly fine. I just had Covid sometime ago (in April 2021). Ranbir ki marzi (It’s Ranbir’s wish); he is entitled to say what he wants. I never said that. I am alright. In fact, I have just returned from Goa with Rahul Rawail. We were there at the Goa festival.”

Earlier, while promoting his father’s last film Sharmaji Namkeen, Ranbir told NDTV: “My uncle Randhir Kapoor, who is going through an early stage of dementia, came to me after the film and said, ‘Tell dad that he is amazing, and where is he, let’s call him’. Art crosses the boundaries of medical conditions… And a good piece of storytelling really embodies that.”

About the film, he said: “The show must go on – you all have heard it but I have seen my father live that. After his demise, we thought the film wouldn’t get completed. We thought of trying VFX or I could wear prosthetics and complete the role but nothing was working out. It was a tough time for all of us.”

“And that’s when Mr. Paresh Rawal stepped in. It was very generous of him to take up this challenge,” he added.

Also read: RRR review: Roaring, reductive, and not too revolting

Sharmaji Namkeen is the first film where the two veteran actors – Rishi Kapoor and Paresh Rawal – will be seen playing one character.

The film has been streaming on Amazon Prime Video from Thursday (March 31).
When asked about Rishi’s performance in Sharmaji Namkeen, Randhir said, “Like always, he was good. He was a very good actor. The movie was good.”