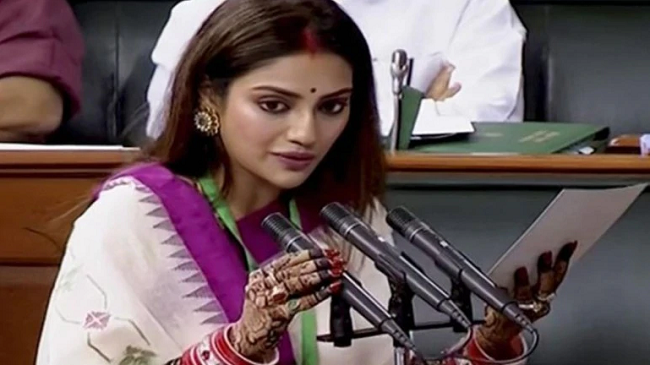 From being an eminent actor to a “people’s person”, Member of Parliament Nusrat Jahan’s journey has been that of a roller-coaster ride. In a tete-a-tete, she talks about her early days as a model, then becoming an established actor and last but not the least, taking a plunge into politics.

Being in the Bengali film industry for over 8 years, I have been transformed as a person. One quality which would highlight my personality, which has been my key source of power, is patience. Right from the early days of modelling or taking my first steps into the film industry, this has helped me to survive.

Being a stern woman at heart and quite headstrong, politics was never my cup of tea. But ever since I have been an actor, there were certain things which remained constant such as my passion for work and dedication that keeps me going in every situation. In fact, be it the industry or politics, I would rather ask people to enhance better human relations to ensure stronger ties, and it took me less time to discover that people do love me and my work on screen. I have received tremendous love and support from them. To do something for them, going beyond my screen space, will not just give them a better life but help them create a better mindset to live with. Thus, the idea of joining politics came about.

The politician’s journey till date:

It has been an incredible 7 months in Parliament and an immensely enriching journey, which has given me new experiences. When people think of politics, the first thought that comes to the mind is, it is a messy place to be in and work. But my perspective is totally different. I call myself a People’s Person — because I must work for them and in return, I am getting ample support from them, which is important. As an MP, my main role is to oversee that their lives are better and society is an improved place to live in.

Whether it’s the big or the small screen or politics, almost everyone who comes into limelight becomes an object for trolls by the media or others. Throughout my career, there have been several instances where my name has been flashed across the national television for irrelevant reasons. Be it because of my acting skills or about me as a person or my entry into politics or even my personal views and opinions, I’ve been subjected to trolling. It is disgusting and ridiculous! But basically, it is all about negativity and negative people who just want to spread a negative idea about you. The moment you stop paying attention and interest to them is when these trolls stop mattering to you and this is exactly what I do.

The best thing about Parliament is the feeling when you step inside the Central Hall and see all the decision-makers sitting there making rules and regulations for an entire nation. Any regular person would get goosebumps as he/she would enter Parliament and I have experienced it too. When I first entered the House of Parliament, inside the Central Hall, I saw the pictures of our great leaders and immediately, I felt that I was stepping into a different world. Every time, I sit in Parliament, it’s a new and different feeling altogether. People quarrelling, banging tables, making policies, amendments, agreeing and disagreeing to the same thing, different political parties with different political views is a scene which is worth witnessing. Most importantly, the people inside are making rules and policies for one reason — the greater good of the nation and its people, which will soon be followed by one and all. Whenever I think of it, I feel proud that I am an MP and I am a part of the great decision-makers of the country too. It’s not just the pride that comes but rather it’s a sense of satisfaction too.

Digital tsunami and its hues on politics:

We all know how amazing digital technology is but we cannot deny how dangerous it can be if it is not utilised properly and in a just manner. So many researchers and experts are talking about the wave of digitisation and its effect on human lives. It can be a boon or a bane. The digital space is a massive space which has a lot of potential. From film promotions to creating opinions, we do need the online media which immensely helps us in different ways and we depend on it regularly. What is important is how we are using it. We should show restrain and responsibility. The Gen-Y is hooked onto their tablets and phones. It is a big advantage as many people can form opinions and use it positively. But people should follow an ethical way of using social media and only then the digital wave can be beneficial to one and all.

Gone are the days when we would follow a one-way direction where only experienced people would occupy the seats. Now, we see a lot of youth participating in politics, which I feel is doing great good for society in return. There should be a two-way flow of communication between the older generation and today’s youth. What matters most is the exchange of ideas, views and opinions. We cannot stay and grow with the old, archaic and existing ideas. There should be an intermix, a healthy exchange of views which will benefit society and its people. In fact, an exchange of ideas is important to create a balance between the two generations, which will take policy formulation to a whole new level. Equal participation is essential to bring about massive development in various spheres.

Politics as a career:

Even today, there is a huge negative perception about politics. Everyone wants an easy job and an easy income. The youth is no exception. However, this statement is difficult to follow because one has to understand that politics is not a regular job. It entails a lot of responsibility and requires ample amount of dedication and respect, but the most important fact is to come out of this notion and identify it as a duty which is to be fulfilled for the overall good of the nation. The day this is identified, automatically an overall change will be seen in the system.

Also, I feel that getting the youth to participate in politics is easier because the younger generation is more enthusiastic and keen to explore newer aspects and broaden their mindset. Therefore, to actively engage the youth in politics would be an asset for everyone, because they are more proactive, and they want to represent the people and bring about fresh developments.

Support and limitations during the journey:

There is no such word as ‘limitation’. In my journey as a politician, I have never faced any constraints in terms of talking to someone in my constituency or freely walking on the roads and voicing my opinion. So, this according to me is a big improvement and empowerment for me, because to have the freedom to make my own decisions matters a lot. Even Chief Minister Mamata Banerjee is one of the most supportive women I have come across, who has brought us here and has given the young generation a wonderful opportunity to showcase talent and represent the people. Understanding one’s true potential and bringing that out are of utmost importance and that is exactly what has happened under her guidance.

The debate around women empowerment and feminism is something which has been going on for decades. But being a woman, I can say that today the fairer sex has come a long way and it is so fulfilling to see that women are aware of their needs and importance and are not afraid to stand up for themselves which is a great sign of development. Many people are screaming for better laws. But the change should not come from Parliament or the difference should not be measured based on how many Bills are being passed. Many people fail to understand that rules and policies are just some written statements on pen and paper, and it cannot change the mentality and psychology of degraded men and people need to realise this. The change should start from the roots.

India is a democratic country where everything is ‘for the people, ‘by the people’, ‘of the people’. Hitler’s rule has probably died centuries back and surely Indians do not want a second Hitler’s rule. The system should be such that proper independence should be guaranteed to one and all to ensure that everyone abides by their rules and has a freedom to make their own decisions, live life the way they want to. Nothing should be imposed on them and they should always be allowed to be vocal. Most importantly, peace should be the top-most priority and should not be disrupted in the nation at any cost.

Development on my mind:

I think a lot of work is pending. Apart from cleaner roads, railways in the area, the most important thing which I am currently working towards is cleaner water in schools through water purifiers, because even today, I feel there is lack of clean water in that area. Being a member of the House Committee of water, it has been easy for me to apply for funds from the Central government. Primary education is most importantly my focus now so that more and more children are sent to schools. Also, ample steps are being taken to ensure women’s safety in every nook and corner and the border areas. Working to thwart women and child trafficking has been my top priority. There has been a significant reduction but I am trying for more and more improvement. Also, with a porous border, we must bring about digital advancement to make people aware of the developments so that they can empower themselves in their way for a different purpose.

The work-life balance is probably the toughest thing. Whatever time I get from my busy schedule, I spend it with my family and do films and promotions. It is better to go with the flow, as they say.