More
More
HomeUncategorizedIndia, 12 others abstain on Russian-led resolution on Ukraine

India, 12 others abstain on Russian-led resolution on Ukraine 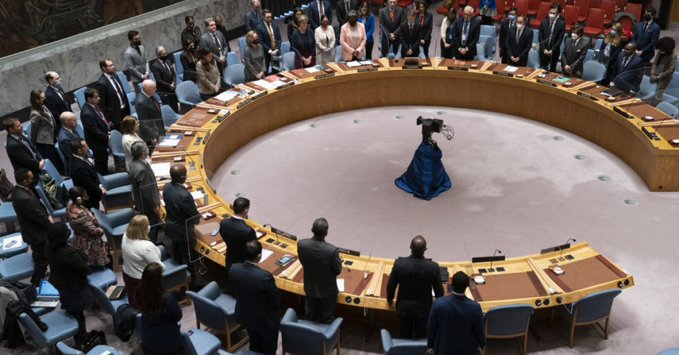 New York: India and 12 other UN Security Council members abstained on a resolution by Russia on the humanitarian crisis in Ukraine.

Russia’s draft resolution, co-sponsored by Belarus, Syria, and North failed to get adopted in the Council on Wednesday as it did not get the required nine yes votes.

While Russia and China voted in favour of the resolution, no countries voting against as India and the remaining Security Council members abstained.

Russia’s draft resolution “demands that civilians, including humanitarian personnel and persons in vulnerable situations, including women and children are fully protected, calls for negotiated ceasefire for enabling safe, rapid, voluntary and unhindered evacuation of civilians, and underscores the need for the parties concerned to agree on humanitarian pauses to this end.”

The resolution made no reference to Russia’s invasion of Ukraine, but asked for concerned parties to allow safe passage of people, including foreign nationals without discrimination, to destinations outside of Ukraine. It also called for the facilitation of safe and unhindered access of humanitarian assistance to those in need in and around Ukraine, including women, girls, men and boys, older persons and persons with disabilities.

India did not make any statement after the vote, though Council members did. India had earlier abstained on two occasions in the Security Council and once in the General Assembly on resolutions on Russia’s invasion of Ukraine.

US Ambassador to the UN Linda Thomas-Greenfield tweeted that “in a unified protest vote”, 13 members of the Security Council abstained from Russia’s farcical resolution deflecting blame for the humanitarian crisis it has created in Ukraine.

In the Explanation of Vote, Thomas-Greenfield said it really is “unconscionable” that Russia would have the audacity to put forward a resolution asking the international community to solve a humanitarian crisis that Russia alone created.

“The United States intends to abstain on this text because, to state the obvious, Russia does not care about the deteriorating humanitarian conditions, or the millions of lives and dreams the war has shattered. If they cared, they would stop fighting.

“Russia is the aggressor, the attacker, the invader – the sole party in Ukraine engaged in a campaign of brutality against the people of Ukraine – and they want us to pass a resolution that does not acknowledge their culpability,” she said.

UK Ambassador Barbara Woodward said that her country will not vote for any resolution, either in the Security Council or in the General Assembly, that does not recognise that Russia is the sole cause of this humanitarian catastrophe – and therefore key to ending it.