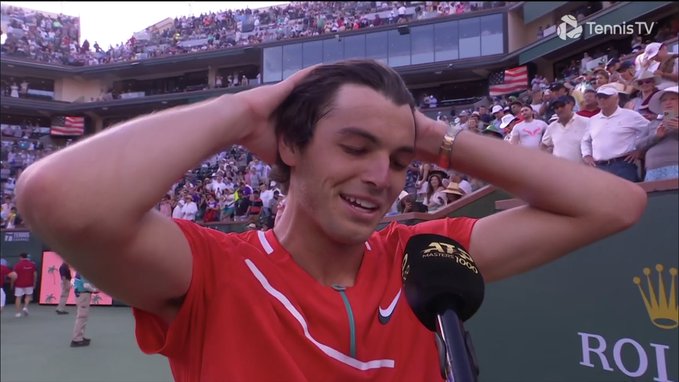 California: Rafael Nadal suffered his first defeat of the year in his 21st match, losing in straight sets to Taylor Fritz in the final at Indian Wells.

Nadal, 35, appeared out of sorts and quickly found himself 0-4 down before leaving the court for treatment, the BBC reported.

With his win, Fritz became the first American to win at Indian Wells since Andre Agassi in 2001.

The Spaniard looked more comfortable on his return but struggled to break down a determined Fritz who won 6-3 7-6 (7-5).

“This is one of those childhood dreams you never even think will come true,” said 24-year-old Fritz.

He saved two break points at 5-5 in the second set before winning a tie-break to secure his second ATP Tour title – and first Masters 1000 victory.

There were concerns about his fitness after Fritz suffered an ankle injury in the semi-final win against Andrey Rublev but he showed no ill-effects during his win, the BBC said.

“I can’t even begin to describe how ridiculous it is to play, how I could play today, I’ve never experienced worse pain like I did before the match,” said Fritz.

“I took a couple of steps and screamed. I was trying to act tough and we did a lot of work leading up to the match.

“I went through a rollercoaster of emotion and all of a sudden being really happy thinking maybe I can play, but it didn’t affect me at all.” Spaniard Nadal, who claimed victory at the Australian Open earlier this year, had won his previous 20 matches in 2022.

But he made 34 unforced errors in the match compared to 22 from Fritz.

“I tried my best during the last two weeks, today was not possible. I had a good fight until the end I think,” said Nadal.

“It’s been a while since I had the opportunity to play here but I am very happy to be back and really enjoy it a lot, every single day I spend here.

“We can be very happy with how things have gone this last couple of months.”