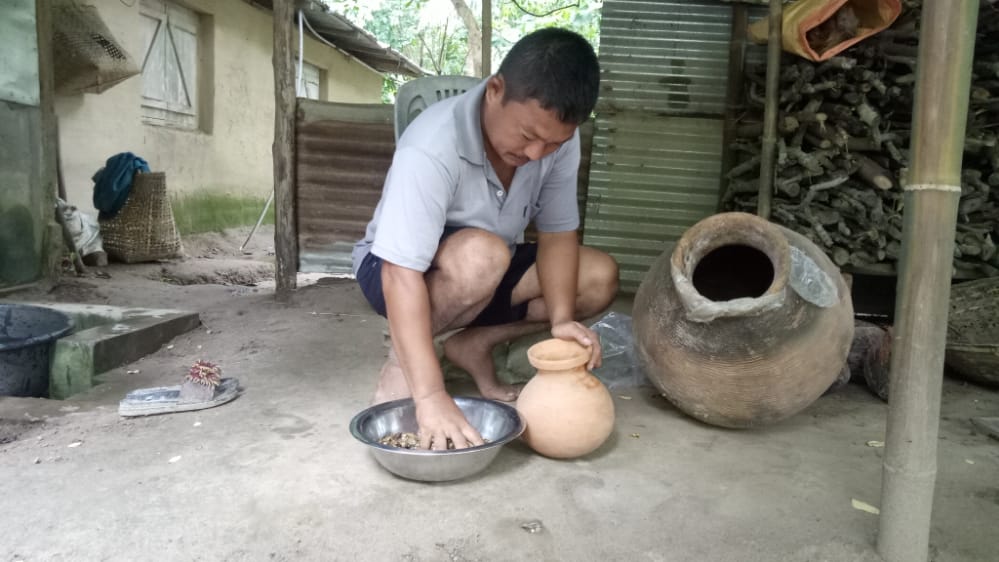 ‘Shidol’, popularly known as Berma (fermented dry fish), an age old practice of the tribal population of Tripura, is now delightfully paving the path to empowerment for the local women of the region. This happened after the state government shifted track from the existing process of fermenting fish to adopt a new, unique and indigenously designed technique of Shidol.

Traditionally prepared in large pots, this technique has now been redesigned by fishery scientific officer Raju Lal Debbarma which enables Shidol manufacturers to prepare the dry fish product in 3 Kg small pots. The new Shidol is renamed as Langi Berma. Berma, is the Kokborok name of dry fish, and Langi as a prefix connotes to the pots used to make the products. Langi was actually a kind of rice bear prepared by indigenous people of Tripura in the pots which are now engaged in making Shidol. This process is unique to Tripura and nowhere else any reference of such a technique has been found.

Chief Officer of Tripura Apex Fisheries Cooperative Society Limited, Raju Lal Debbarma recalled days of his posting at Teliamura when this idea first struck him. Debbarma worked relentlessly to develop the fermented fish technique with stipulated arrangements and after 3 to 4 failed attempts hit success in 2017.

“Earlier Shidol was largely imported from Bangladesh. Since 2017 the indigenous people here are successfully implementing this technology to make Shidol. Shidol being one of the preferred food items of Tripura for both the Bengalis and tribal communities, I have tried to reach out every rural household so that they can manufacture their own Shidol which will cut down our import dependence”, he said.

The traditional process of Shidol-making required huge set up and large pots. Besides, the mechanism that was involved demanded leg-rolling the set up, which was only possible by men. “The idea, he said, was to give the tribal woman a income boost. The new customised process enables women to easily stuff the dry fish and the set up can also be installed in the backyard of the house,” informs Debbarma.

Basically, the fermentation process in large pots took six months which kept a big amount of money stuck in the business. On the contrary, small pots give end products within three to four months and the prices also remain competitive giving the traders an edge in Shidol making business.

Recently, Mukthang SHG group of Champak Nagar earned accolades for preparing Langi Berma at a fish festival. One of the members of the group Ratilata Debbarma said, “Usually, the giant pots are sold for Rs 15 to 16 thousand that carry 35 to 40 Kg of dry fish. The small pots can bear 2.5 to a little over 3 kg, once the fermentation process is complete. By and large, the quantum of profit remains the same and many women are now showing interest to join the business”.

Nanda Lal Debbarma, another key member of the group who has been instrumental in setting up initiatives like Shikang and Baithang – companies that deal in dry fish products – said, “Initially we also made in large quantities, but eventually thought of preparing the product in lesser volumes, which we felt can double the profit. The idea worked well for us and more and more women of the tribal areas are now showing interest to make it in their kitchen. Products are available in desirable quantities, and one can also buy a whole pot”.

That said, the lockdown has dealt a severe blow to the Shidol business. Traditionally Shidol is a cure to diseases like fever and cold and Covid19 situation has added up to the market demand but sadly, due to the lockdown, makers have failed to prepare Shidol for this season. Lamenting the lost opportunity Nanda Lal says, “We usually procure the raw material in the month of March, but this year, lack of transportation and spread of the Covid19 prevented us from taking the needful preparation for Shidol making”.

Reviving indigenous cultural heritage is considered one of the major developmental goals in the world today. Let us hope that Tripura get’s back her mojo soon and goes bouncing back to business!