More
More
HomeEntertainmentAll About EntertainmentWhen Indraneil Sengupta made his wife wait on stairs to meet Sandip... 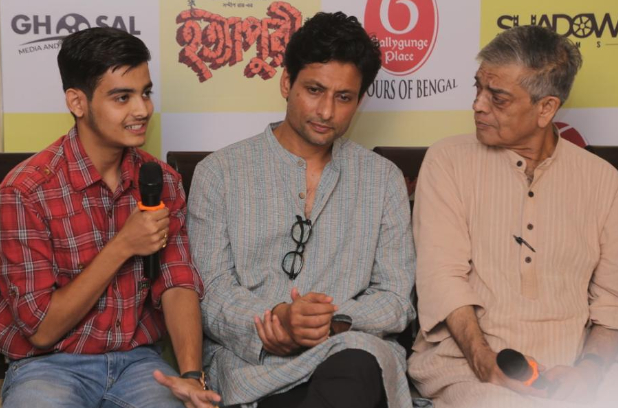 Actor Indraneil Sengupta had made his wife, Barkha Bisht Sengupta, wait on the stairs as he went to meet director Sandip Ray at his Bishop Lefroy Road house in Kolkata. It was during the time when Sabyasachi Chakrabarty had just announced that he would no longer play Feluda. “That was the first time I was approaching a director ever in my career to consider me for a role. I remember going to Babu da’s (as Sandip Ray is fondly called in the film fraternity) house and telling him how interested I was in playing Feluda. It was just after I heard that Sabyasachi Chakrabarty did not want to play Feluda again. He gave him a patient hearing. Then, Badshahi Angti happened in 2014 and Abir Chatterjee was roped in as Feluda. Babu da called me again after some years but somehow it didn’t work out. After six years, here I am as Feluda. Dreams do come true,” said a visibly pleased Indraneil.

For almost any Bengali actor, Feluda is a dream role and it was no different for Indraneil. So, when he received the call from Ray to act in his next Felu film, Hatyapuri, he agreed to the project instantly.

Now that the actor has started shooting for Hatyapuri in Kolkata, Indraneil is on cloud nine. “I am thrilled that I am Feluda. I am just enjoying the ride. Babu da and Buni di (Lalita Ray, his wife who is also in charge of the styling of the film) make us feel so special on the set. It was always my dream to play Feluda and now, I am Feluda,” said Indraneil, who had earlier played Kiriti, a fictional detective of Bengali literature created by Dr Nihar Ranjan Gupta on the big screen too.

The shooting of Hatyapuri faced uncertainty when Ray had “creative differences” about casting with the production house SVF. Now, Ray’s film is produced by Ghosal Media Entertainment and Shadow Films, and is eyeing a Christmas 2022 release.

The director is pleased with the casting now. Finally, he has found his Jatayu in Abhijit Guha. A popular director himself in Bengal, Abhijit also acts occasionally. But now, he will be seen as Lalmohan Ganguly aka Jatayu in Hatyapuri. Ayush Das of Jekhane Bhooter Bhoy fame will be seen as Topse. The other actors in the film are Paran Bandopadhyay, Subhasish Mukherjee, Saheb Chatterjee and Bharat Kaul, among others.

“The casting has been done with a lot of care. Indraneil had approached me years back to tell me how interested he was to play Feluda on the big screen. During that time, Benu (Sabyasachi Chakrabarty) was already playing Feluda. When I was looking for Felu this time, I got in touch with him,” said the director, who will shoot some portions of Hatyapuri in Puri, Odisha too.

In fact, Hatyapuri is one of the favourite Feluda stories of Ray. “Puri is a favourite place of Bengalis and Hatyapuri has a lot of twists. Also, I was looking for a place closer home amid Covid-19 times and what better place than Puri,” he said.

In 2016, Ray had last shot his Double Feluda film with Sabyasachi.