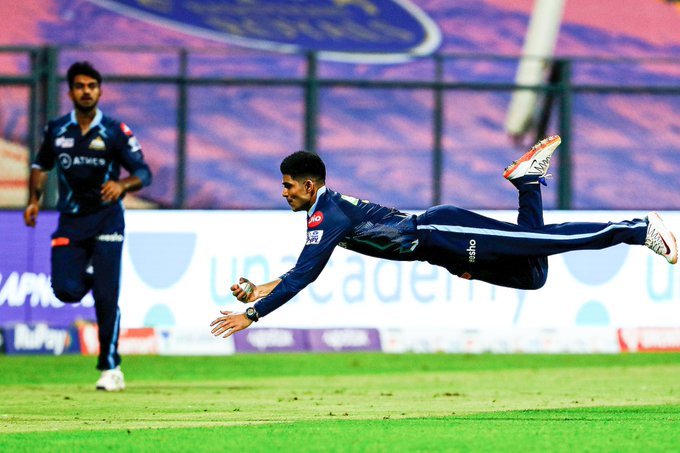 Mumbai: Rahul Tewatia and Abhinav Manhor steadied their nerves to help Gujarat Titans clinch a thriller over Lucknow Super Giants, in a match between the IPL 2022 debutants at the Wankhede Stadium here on Monday.

Tewatia remained unbeaten on 40 off 24 and Manohar on 15 off seven balls. Eight boundaries and two sixes were hammered by them which was good enough for Gujarat to cross the target of 159 runs set by Lucknow.

Sent in to bat, Lucknow had managed 58 for six, thanks to Deepak Hooda and Ayush Badoni’s fifties who forged a brilliant recovery after Mohammed Shami (3 for 25) wreaked havoc, pushing Lucknow into deep trouble at 29 for four in the powerplay.

Hooda fell for 55, but Badoni went on to score a fifty on debut. Even with the ball, Lucknow picked up early wickets and kept themselves in the game.

Needing 68 to win off the last six overs, Gujarat’s Tewatia and David Miller in the middle stitched together 60 runs in 34 balls in a counter-attacking stand for the fifth wicket.

Tewatia launched an unblemished attack on the Indian spinners as Ravi Bishnoi leaked far too many runs. As many as 39 runs came in 11 balls to turn the game on its head.

Miller returned to the dugout for 30, but Tewatia held his nerves and was determined till the end.

With 11 needed off the last over, Manohar whacked two consecutive boundaries off the first two balls and then he crossed over for a single, leaving Tewatia to finish it off with a boundary off Avesh Khan.

Lucknow pacer Dushmantha Chameera removed Shubman Gill (0) and Vijay Shankar (4) early in the powerplay to leave Gujarat reeling at 44 for two after the first six overs.

Skipper Hardik Pandya (33) joined Matthew Wade (30) after his team lost two early wickets in the chase. Hardik and Wade added a 57-run partnership for the third wicket, but perished in quick succession.

Sent into bat, Lucknow were tottering at 32 for four after the first six overs, but Hooda and Badoni bailed them out with splendid fifties. Both Hooda and Badoni took time to get their eye and, once they did, it was sheer butchery on display.

They added a crucial 87 runs for the fifth wicket that helped Lucknow post 158 for six, setting a competitive target for Gujarat.

Hooda (55 off 41, 6×4 2×6) reached his fifty and after his dismissal, Badoni took over and claimed his IPL debut landmark by notching up a magnificent 41-ball 54, decorated with four boundaries and three sixes. Krunal Pandya (21 no off 13 balls) also helped Lucknow to get to a defending total.