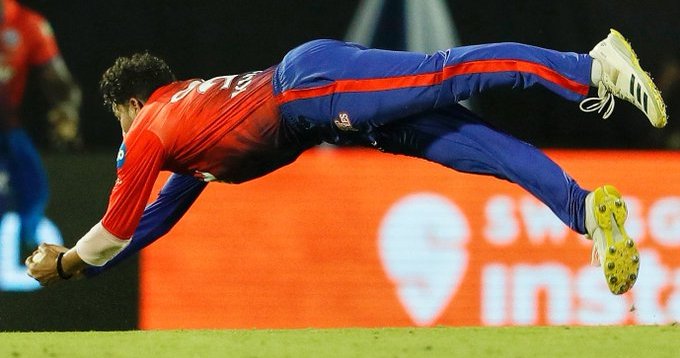 Put in to bat, DC recorded this season’s highest first innings score of 215 for the loss of five wickets. However, in reply, KKR folded for 171.

KKR failed to get the start they needed as they lost two wickets in the powerplay. Khaleel Ahmed dismissed opener Venkatesh Iyer for 18 in the third over and he got Ajinkya Rahane (8) on a slower ball in the fifth over.

After losing two quick wickets, Nitish Rana and skipper Shreyas Iyer steadied the ship for KKR with their 69-run partnership off 42 balls for the third wicket.

Then, Lalit Yadav removed Rana (30) in the 12th over to break the partnership. In the next over, Kuldeep trapped the big fish Iyer (54) and KKR were reduced to 118/4.

Khaleel continued to wreak havoc as he scalped his third in the form of Sam Bilings (15) in the 15th over.

Then Pat Cummins, who had played a match-winning knock against Mumbai Indians, came to join Andre Russell. But Kuldeep showcased his fine form and didn’t let Cummins stay long and sent him back cheaply for 4.

In the same over he got Sunil Narine (4) to claim his third wicket, and caught and bowled Umesh Yadav for duck to make it four.

The Indian spinner made the task tougher for KKR as the fall of wickets took the asking run-rate close to 19 runs per over which kept increasing as DC bowler were not giving chance to Russell to go big.

In the final over, Shardul Thakur got rid of Russell (24) and Rasikh Salam (7) to put the last nail in the coffin. Khaleel scalped three wickets, while Shardul and Lalit got two and one, respectively.

Warner and Shaw together posted 68 runs in the powerplay and continued punishing KKR bowlers before Varun Chakravarthy got the much-needed breakthrough as he clean bowled set batter Shaw for 51.

The Australian batter was then joined by Rishabh Pant and the game went on in the same momentum. In the 13th over, Warner brought up his 51st IPL half-century by hitting Russell for a maximum.

In the same over, Russell trapped Pant for 27. After Pant’s dismissal, DC’s innings started to wobble as in the very next over KKR’s experienced bowler Sunil Narine sent Lalit back for 1.

He then dismissed dangerous Rovman Powell cheaply for 6 in the 16th over before he could cause any trouble for KKR bowlers. Warner’s blistering inning come to an end in the 17th over, when he was caught by Rahane at deep mid-wicket off the bowling of Umesh.

Then Axar and Shardul’s quickfire took DC past the 200-run mark. The duo scored unbeaten 39 runs off the last 12 balls.

For KKR, Narine scalped two wickets after conceding 21 runs in his four-over quota. Umesh, Chakravarthy and Russell claimed one wicket each.