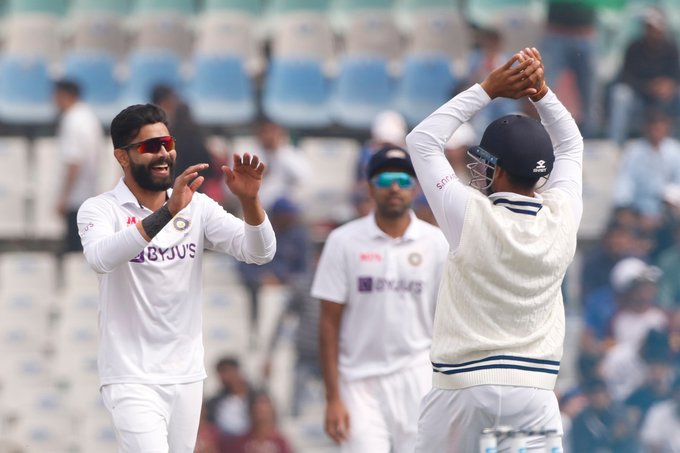 Mohali: Ravindra Jadeja’s match haul of nine wickets, along with a scintillating 175 not out, helped India to an innings and 222-run victory on Day 3 of the first Test against Sri Lanka here on Sunday.

Player of the Match Jadeja became the first man, and only the sixth, in almost 50 years to pick up a fiffer and score 150 runs in the same match.

Former England captain, Michael Vaughn, tweeted “The ‘Rockstar’ as Warney named him is having some game in his memory … Fantastic.”

He got past Kapil’s record of 434 wickets after removing Charith Asalanka, caught by Virat Kohli for 20, after lunch. He had equalled Kapil’s record after claiming Lahiru Thirimanne, who was caught by Rohit Sharma for nought.

Ashwin is behind Anil Kumble (619) in the list of Indian bowlers with most dismissals in Tests. Harbhajan Singh stands fourth with 417.

Indian cricket legend Sachin Tendulkar praised him and tweeted: “Fantastic landmark, @ashwinravi99 To go past @therealkapildev paaji is an achievement in itself. The way you were going, it was only a matter of time.Wish you many more!”

After bowling out the visitors for 174 runs in the first innings, the Indian bowlers dismissed them for 178 in the second.

Jadeja and Ashwin picked up four wickets each in the second innings, while Mohammed Shami picked up two.

India scored 574 runs for the loss of eight wickets in the first innings.
Niroshan Dickwella remained the top scorer for Sri Lanka with 51 runs.

The second Test of the series begins on March 12 at the Chinnaswamy Stadium in Bangalore. The match is a Day/Night Test and will have 100 per cent crowd attendance.