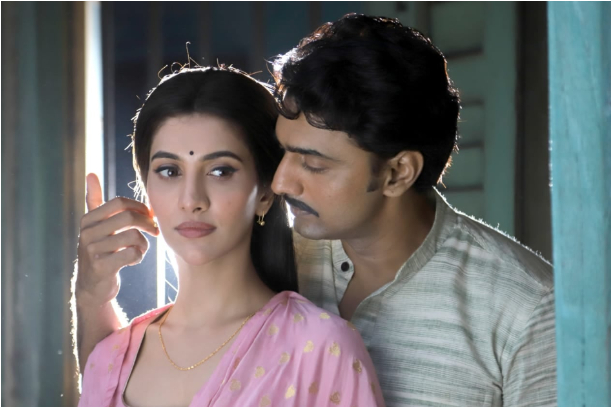 Before I get into the review of Kishmish, I would like to point out the kind of Bengali rom-coms we were served till a few years ago. No, don’t get confused with 1953’s Saare Chuattor, Dhanni Meye (1971), Chhadmabeshi (1971), Basanta Bilap (1973) or the brilliant Mouchak (1974). Those times were golden, the stories different, and the actors immortal. Even in 2019 and 2020, “commercial” Bengali romantic comedies meant a not-so-happy poor boy falling in love with an NRI girl, or vice-versa. Add a bit of flashback, fight sequence and songs shot in foreign locales, and there you go: unsavoury recipes dished out as romantic comedies to the Bengali audience.

Let’s admit that Kishmish is a welcome change. It’s more about the actors, their performances than their stardom. And this is where Kishmish manages to retain the sweetness of its flavour.

Debutant director Rahool Mukherjee doesn’t take time to take the audience into his world — the world of Tintin, Dev’s character in the film. Tintin has no interest in college education. Rather, he wants to become a cartoonist. From his graphic t-shirts to his bedroom, everything is reflective of his passion for cartoons (getting Hum Tum flashbacks).

Not all love stories happen at first sight. Thankfully. So, when Tintin gets admitted to a college in Darjeeling, he meets Rukmini’s Rohini Sen. Friendship grows over time and finally, love takes form. But love is never simple though the story appears simple and straightforward. In fact, the essence of a good romantic comedy is the chemistry between the lead actors and here, you get that in plenty. You know the reasons. Right?

Maybe the director grew up on 90s Bollywood, so we get plenty of references from DDLJ, Main Hoon Na, Sajaan, Devdas and Kal Ho Na Ho. I particularly liked how Rahool twisted Kal Ho Na Ho’s “6 din, ladki in” advice and made it into ‘6 days father-mother in’.

Rahool also goes into a bit of Love Aaj Kal (Imitiaz Ali’s 2009 movie) mode and music director Nilayan does a commendable job with the song, Oboseshe. In fact, the music and cinematography (kudos to Modhura Palit, what frames and colours) make Kishmish a delectable treat.

Also read: Won’t be able to sleep if I repeat myself, says Dev

If there’s one character who overshadowed the others, it’s Kharaj Mukherjee. As Dev’s father, he will make you incredibly relaxed while watching the film. He is so effortless as Goblu Mukherjee, someone who grew up in Kalighat, worships CM Mamata Banerjee and is a crazy fan of Mohun Bagan. He might not be the perfect foil to Anjana Basu’s Pubali but it is Kharaj who scores maximum goals.

As Tintin and Rohini, you can tell that Dev and Rukmini are having a blast on screen. Despite six films together, the pair felt fresh because they exuded playfulness and charisma.

The raisins definitely complement even the most full-flavoured cuisine. The same happens with Dev-Rukmini’s Kishmish. From the riot of colours, and the shared laughter to the savoury bond of families, you are bound to relish Kishmish.