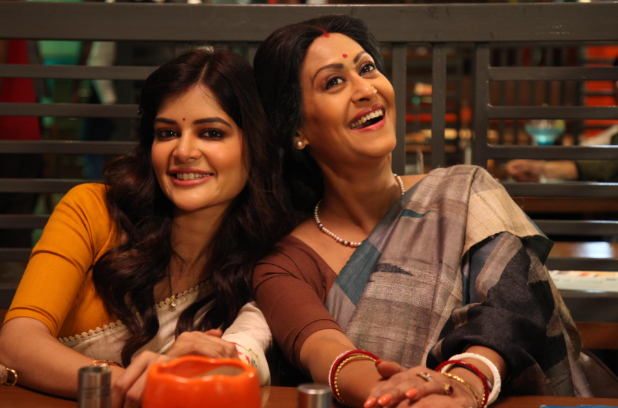 As I watched Kuler Achaar at the state-run theatre Nandan mostly packed with middle-aged women, I could see how they cheered each time Madhumita Sarcar’s Mithi refused to change her surname and Indrani Haldar’s Mitali was hell bent on using her maiden name after 40 years of marriage. And this is where writer and director Sudeep Das wins. In his debut directorial Kuler Achaar, he has managed to serve the (women) audience with a tale that’s relatable and also topical.

In India, changing the surname after a wedding has always been a custom. It’s believed that a woman’s identity is related to the husband and only if she adopts his surname that she will become a part of his family. Today, a lot of women are keeping their paternal surname. Some are keeping their paternal surname and adding their husband’s last name too. But then, many still do not have a choice. But what’s the significance of a surname? Sujan Mukherjee’s Pranotosh tells in the film, “Surname carries your history.”

Mithi refuses to adopt Pritam’s (Vikram Chatterjee) surname. It leads to a catastrophe in the family. Pritam’s father Pranotosh believes in the old traditional customs but Mithi’s mother-in-law (Indrani Haldar) decides to go back to her paternal surname. She wants to carry forward the “history of her family.”

Though the film begins with Vikram and Madhumita’s honeymoon fiasco, soon you would know the movie belongs to Indrani. Just watch out for her introduction scene — it looks as if we are watching the pilot of a serial. And you would know who the hero is of Kuler Achaar?

In fact, Sudeep adds the drama in the plot just like the audience would like it. So, you have a tiff between Pritam and Mithi after Mitali wants her maiden surname back. Then, there’s an accident to bring the young couple closer. Of course, Pranotosh becomes the baddie of the house as he is the only one opposing the surname changes. So, get ready to watch a lot of outbursts (overdramatic) between Pranotosh and Mitali.

However, in all these scenes, it’s Indrani who shines the brightest. From crying while watching a daily soap, to posing infront of her school, Indrani is a delight to watch on screen just like she was when she played Jhinuk in Dahan (1997) or Madhura in Angshumaner Chhobi (2009). The nuances she brings to her role are amazing.

Madhumita is hyperactive and overacts in the first half, however, in the second half, she mellows down. She allows herself to absorb the emotional response. Vikram plays a good boy again. This time, he is a supportive husband but I found him a lot similar to his characters in daily soaps. Just hope he steps out of his comfort zone soon. Sujan is a superior performer but in some scenes, he overstepped.

The music of the film is the strength of Kuler Achaar. Brilliant compositions by Prosen Er Dol Bol especially Iman Chakraborty’s Ami Amar Modhye will play on loop.

Though the film deals with a contemporary topic, the main problem lies in the narrative. It seems the director lost track midway. Initially, it looks Mithi didn’t want to adopt her husband’s surname because she has a mind of her own. But then, we find out she was convinced by her friend. Sudeep shows how women are still tied down to society’s patriarchal values and then tries to fight it out. But, there’s confusion regarding her choice.