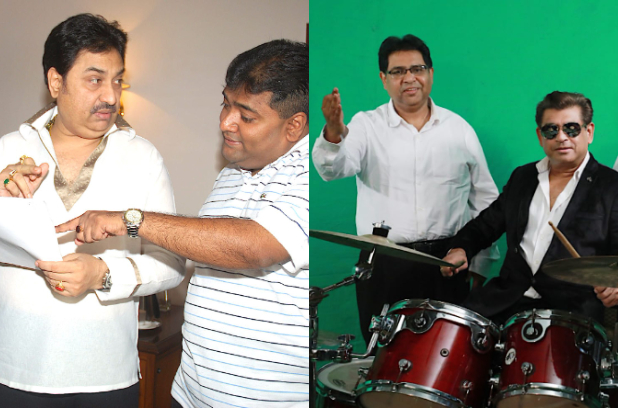 The puja songs, which reflected the spirit of the season, have been replaced by Kacha Badam, and Tumpa Sona at the pandals. Today, these puja albums have become a mere object of nostalgia. But then, music directors Shiladitya and Raj have tried to bring back the lost legacy of Bengali puja albums with their musical jukebox Phire Paowa.

Sung by the terrific trio — Kumar Sanu, Alka Yagnik and Amit Kumar — who ruled the music industry and gave numerous hit puja songs during 80s and 90s, Phire Paowa will rekindle the interest of the listeners. The directors have cashed in on ‘nostalgia’ and ‘melody’ to connect with today’s music lovers.

Recently, Pandit Ajoy Chakraborty and Ustad Rashid Khan launched the album in the presence of the music director duo Shiladitya – Raj, Apeksha Lahiri, director, Asha Audio and others in Kolkata. The three singers, however, couldn’t make it to the launch.

“We used to wait eagerly during our childhood days for the puja music albums to come out first in records. Then over the years, we had cassettes and later CDs arrived. But in the last decade or so, we found that the interest for puja music albums has diminished significantly. Thus, we thought of reviving the trend and got together the legends, whose songs have created magic in the 90s and even till early 2000’s for Phire Paowa,” said music directors Shiladitya – Raj.

The composers had earlier recorded with Amit Kumar and Kumar Sanu, but this was the first time they were working with the enigmatic Alka Yagnik. “Recording with them once again was a pleasure as they still have that zest, the tonal quality and melody in their voice even after so many years. We worked with Alka Yagnik for the first time and she is fabulous,” they said.

Pandit Ajoy Chakraborty went down the memory lane and recalled the time when his first Durga Puja album was released in 1983. Within 20 days, all cassettes were sold out. He had introduced Ragashree Bengali songs in his puja album. “It evokes memories and nostalgia. I am happy for Shiladitya and Raj that they are trying to bring back the pujor gaan culture with Sanu, Alka and Amit,” he said.

The veteran singer then pointed out how there has been a continuous and progressive degradation of Bengali music. Mentioning the viral song Kacha Badam and how people took instant liking towards it, the legend said, “We need to remember the roots we belong to. It’s the land of Tagore. We should take music to greater heights and not drown ourselves in mediocrity,” he said.

Apeksha Lahiri, director, Asha Audio Company, said puja is the best time for songs. “We have been coming out with such songs for the past 27 years. Since the era is of digitalization, we thought of presenting a musical jukebox of puja album. The songs are melodious and equally refreshing, having the puja song feel in each of them,” she said.