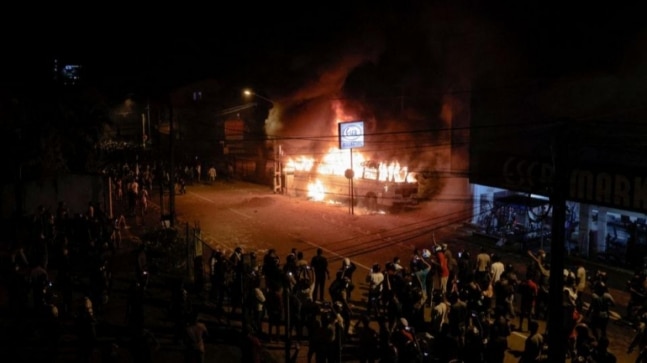 Riot police had to be deployed to control the protesters, they used tear gas and water cannons to disperse the crowd.

Protesters chanted “Gota go home”. Many of them were seen holding posters with anti-government slogans, and demanded that the government should step down as it has “mishandled” the nation’s economy.

Over the last few weeks, Sri Lanka has seen a severe crisis characterised by acute shortages of food, cooking gas and fuel. Skyrocketing costs have added to public resentment.

Sri Lanka’s economy was affected by a long-brewing Balance of Payments problem, which was aggravated due to the pandemic and led to a dollar crunch late last year. The crisis escalated since the start of 2022, hitting Sri Lankans hard.

The protests remained largely peaceful until Thursday night when hundreds of people took their anger to the President’s doorstep.

Police said that 45 people had been arrested. “Five policemen were injured while several vehicles were set on fire by the protesters,” officials added, saying that the injured have been admitted to hospital for treatment.

“I am well aware of the difficulties faced by the people,” President Rajapaksa said in a televised address on March 16, vowing to take “tough decisions” to find solutions. However, he faces widespread criticism over “mismanagement”.

The current crisis is the ruling administration’s biggest political challenge yet, after Rajapaksa’s thumping victory in 2019, and the subsequent big win for his party in the 2020 general elections.