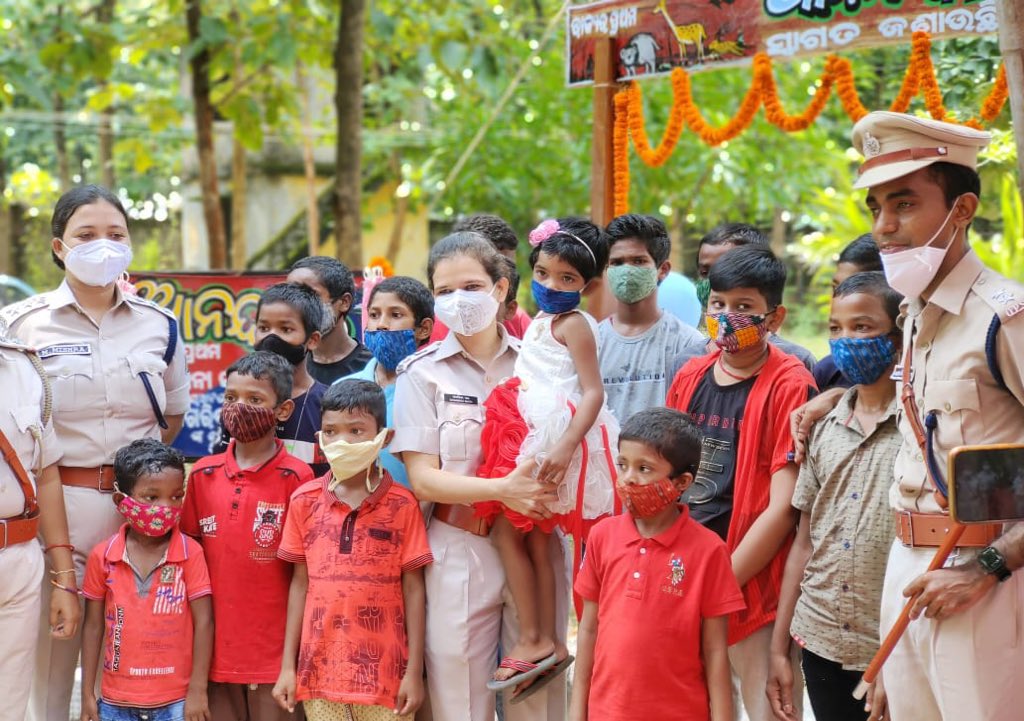 As India celebrates its 75th year of independence the idea of true freedom can only be realised when Indian minds are adequately empowered. To urge young minds to read and be self-aware, Sundargarh Police under the leadership of SP Sagarika Nath, IPS has launched yet another community participation initiative called ‘Let’s Read’.

This innovative project would not only bridge the gap between the police and the community at large but also be another step towards transforming Sundargarh into a child-friendly policing district.

As part of the Let’s Read program a reading-cum-activity center has been inaugurated at Reserve Police Lines, Sankara this Independence Day under the gracious presence of Dr Aruna Kumar Sahoo, Hon’ble Minister of Agriculture and Farmers’ Empowerment, Fisheries and Animal Resource Development, Higher Education, Government of Odisha. The Collector and District Magistrate of Sundargarh, Nikhil Pavan Kalyan, IAS and SP Sagarika Nath, IPS were also present at the occasion.

This is not the first time Sundargarh Police has come up with such a unique concept for children. Under the Ama Khushi, Ama Suraksha program, Anand Ghar (meaning A Happy Place) was first set up at Rajgangpur Police Station to provide a child-friendly ambience to any child visiting the Police station like children who conflict with the law, disturbed children or children whose parents are involved in criminal activities. The Let’s Read initiative provides another attraction to Anand Ghar.

“The perception of policing is gradually changing. To serve society better we need the public and the police to work in cohesion and not in antagonism. So, we need more community participation. Children grow up with the perception that the police are an antagonistic force. To curb this idea at the crib we realized that we need to catch them young. This is how the idea was conceptualized,” SP Sundargarh said.

The Anand Ghar initiative was launched following the guidelines of the National Commission for Protection of Child Rights. Two women constables or Odisha Auxiliary Police Force or Home Guards of each Police Station have received training from legal and psychological experts on how to handle children in such cases. Every Anand Ghar will function under the supervision of the Child Welfare Officer of the police station.

Several seminars and webinars were organized with subject experts from Odisha State Women Commission, consultants from the Women and Child Department, Government of Odisha, and UNICEF.

“Children who need protection and those who conflict with the law are apprehensive in opening up to the police personnel. This is due to the natural psychological effect on their minds because of the preconceived notions that have been prevalent in society. So, we made a room that is conducive for children so that the child feels natural and not that he is in a police station. For children in conflict with the law, if we can bring about a positive psychological effect in the child’s mind that he might have done something wrong, that goes a long way,” SP Sundargarh shared.

The positive response of the Anand Ghar project from the people prompted Sundargarh Police to set up Anand Ghars at four other police stations- Kutra, Badgaon, Birmitrapur and Sadar. The aim is to set up such child-friendly spaces at every police station in the district in a phased manner.

Giving a boost to the Anand Ghar program, these ‘happy places’ will now be equipped with a computer system with an internet facility. Based on the idea of Building as a Learning Aid, these spaces would have child-friendly infrastructure, decor, and toys. “If you inculcate certain small aspects into the infrastructure it has multiple effects on the psyche of the child. For instance, the floor of the doors of the Anand Ghar has been marked from zero to 90 degrees so that the child can learn the concept of degrees,” SP Sundargarh informed.

The murals on the wall have many moral based stories from the Panchatantra, the Indian freedom fighters or the culture of Odisha. There is a park and a fishing pond as well.

The Anand Ghar would have the card and board games, colouring and sketchbooks so that children can enjoy their visit to the police station.

“We are spreading awareness on Covid. We are also trying to spread awareness among them online. We have collated some videos which can be downloaded and shown to children. We have developed them as cartoons. For instance, we may show them videos on how to detect sexual harassment and how to report them,” said SP, Sundargarh.

To encourage young minds to inculcate the habit of reading Anand Ghars will also house a library that would have fiction, non-fiction, bestsellers, encyclopedias in English as well as Odia language. An e-Library facility would also be available for young minds to read and explore.

“I had always loved reading books and we had access to a well-equipped library. However, in interior areas and difficult zones, many books may not be easily accessible. Therefore, we came up with the concept of having a library and an e-Library at the Anand Ghar as well,” Sagarika Nath, IPS shared.

For those teenagers preparing for competitive examinations, these libraries will offer newspapers, magazines, and study materials as well. If anyone wants a particular book that is not available at the library, he may place a request for the same in a request box.

Sagarika Nath who is a 2016 batch IPS officer from Odisha cadre had been afraid of the police in her childhood as well. “When I came to the other side of the table, I realized that policing is not horrendous act and police is not against the community. So, there’s no reason to be afraid of the police and we need to alter the present societal perception,” she shared.

“When we started the first Anand Ghar it had no internet facility. Children used to come, play, look at the murals and makeup stories. I was touched when the kids said they liked coming to the police station and so we decided to take it further. At present we have 6 police stations which have Anand Ghars and I hope it will leave a positive long-lasting impact among the children and the society at large,” SP Sagarkia Nath shared.

Let’s Read will enable Sundargarh Police to make a difference in society by inculcating the habit of reading from childhood and empowering them to be responsible and self-aware citizens of tomorrow.