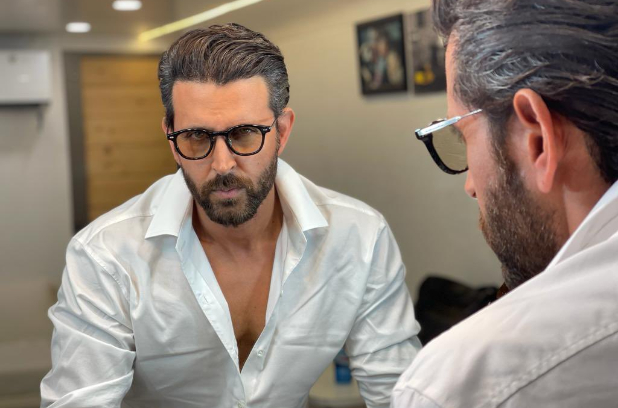 We have heard Hrithik Roshan sing before in films like Kites, Zindagi Na Milegi Dobara and Guzaarish. A true-blue Bollywood superstar, who is often referred to as the ‘complete package’, on the occasion of India’s 75th Independence Day, the War superstar again got behind the microphone to pursue his singing passion. The Super 30 actor treated fans and audiences across the country to his rendition of Vande Mataram.

Apart from being one of the finest actors and dancers in the country, Hrithik Roshan also hails from a music family and has a long tryst with music. Paying tribute to the men and women of the Indian Defence Forces and celebrating the undying spirit of India, Hrithik Roshan lent his vocals to Vande Mataram originally produced by Jackky Bhagnani’s JJust Music, composed by Vishal Mishra and sung by Tiger Shroff.

Taking to social media he shared, “Felt it . Sang it. Put some shots together to present it. It’s better on headphones altho won’t make the bad singing better. In hope & dedicated to the true spirit of Freedom. Freedom for every single individual. Thank you @jackkybhagnani for allowing me to use your creation. Thank you @vishalmishraofficial , been humming this since I heard this wonderful track Thanks to my man @tigerjackieshroff for inspiring this , following your lead my friend. Thank you @purpose.studios for working on a holiday and taking a spontaneous thought n working your magic on it. Sorry for taking you by surprise @shannondonaldmusic promise to do proper way next time 🙂 @jjustmusicofficial @warnermusicindia #VandeMataram”

Felt it. Sang it. Put some shots together to present it. 🙂https://t.co/gaTzP6QSUA

The video shows the beauty of India and people of different cultures, and the magnificent landscapes. The video ends on a high note as we see the Indian Defense Forces hoisting the flag in some of the country’s most breathtaking terrain, and ends with a messages, “Cheer for India”.

Music has always been in the superstar’s blood. His grandfather Roshanlal was a celebrated musician, his grandmother Ira Roshan, too, had sung for films including a duet with Lata Mangeshkar for the film Anokha Pyaar in 1948 and his uncle Rajesh Roshan has been a prominent music composer for over 50 years.

As mentioned above, Hrithik lent his voice to songs like Zindagi Na Milegi Dobara’s Senorita, Guzaarish’s What A Wonderful World and Kites In the Sky from the film Kites and is often seen crooning on his social media posts including Koi Mil Gaya’s Jaadoo on a throwback BTS post from the sets of Super 30 and the classic Tere Jaisa Yaar Kahan among others.

On the work front, Hrithik is now awaiting the release of Vikram Vedha with Saif Ali Khan, which will release on September 30. The actor is shooting for Fighter with Deepika Padukone.

Meanwhile, Hrithik faced the wrath of netizens when he came out in support of Aamir’s film and shared his views on social media. Since then, the netizens are threatening to boycott Vikram Vedha.

Ever since Hrithik urged the audience to watch Laal Singh Chaddha, the netizens have criticized him for not praising The Kashmir Files and threatened him to boycott his upcoming film. #BoycottVikramVedha is trending on Twitter for this reason.