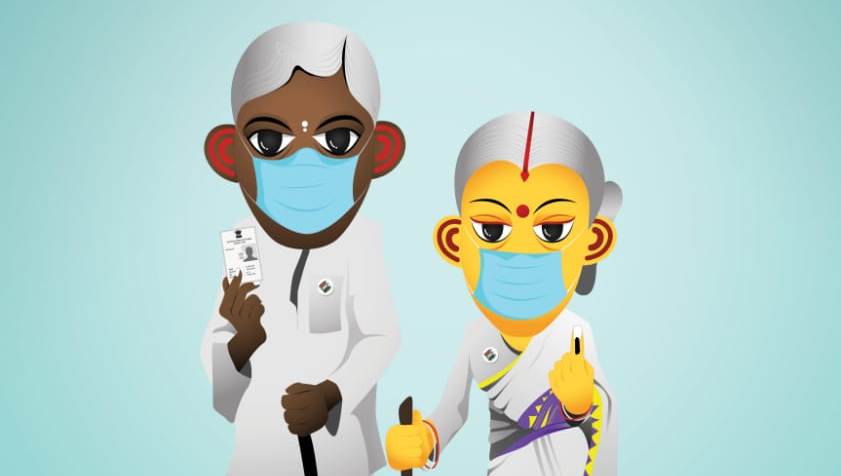 Dakshin Dinajpur unveiled its official election mascot on March 3. Named Khona Dadu and Khona Dida after the popular indigenous folk drama, Khon, the mascot has caught immediate attention. Khon Pala Gan is a popular satirical folk drama of the region which blends theatre, song and dance. This indigenous form of theatre is practiced by the Rajbanshis, an ethnic group inhabiting this part of Bengal.

The male and female characters depicted as the mascot are drawn from two famous Khon characters, Bura and Buri. This time the Election Commission of India has extended the usage of postal ballots for PWD (Person with Disabilities), COVID affected individuals and senior citizens over 80 years of age. Shri Nikhil Nirmal, IAS, District Collector of Dakshin Dinajpur says it is important to raise awareness about this new provision among the electorate which is why this mascot has been designed. Voter selfie zones are also set up across the district with the theme of Khon for spreading the word.

The characters are also found to be wearing masks that symbolise the importance of following safety protocols amidst the pandemic.

The Rajbanshi community of North Bengal, also known as Deshiya Poliya is spread across Dakshin Dinajpur but is concentrated in blocks like Kushmandi, Harirampur and parts of Banshihari.

Khon is an important part of Dinajpur’s cultural heritage, still thriving despite being frowned upon by more mainstream schools of theatre. Nikhil Nirmal, IAS, says, “Purists claim that so-called commercialisation has belittled the heritage of Khon Pala-gaan. Khon is an ancient form of lyrical folk drama held in open spaces and generally goes on for hours, often throughout the night.”

Nirmal adds, “In recent times, Khon artists are getting opportunity as they have been enrolled under Lokprasar Prokolpo. They are performing in almost all government events and for various awareness generation campaigns. They are also performing outside Dakshin Dinajpur and also out of West Bengal. Hence, they’re mixing their local dialect with Bengali words and trimming down the length of performances, adapting and catering to the needs of audiences outside the district.”

Dakshin Dinajpur is primarily a rural agrarian district in West Bengal spread over an area of 2162 square kilometers. It shares 252 kilometers long international border with Bangladesh. The district is known for its rich folk culture, history and traditions. Halua Haluani, a popular folk drama or the Mukha dance are some of the major attractions.