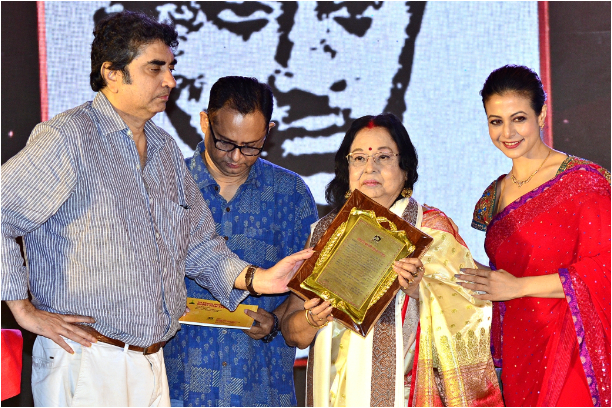 A few days ago, she was hospitalized following age-related ailments and despite her ardent wish, veteran actress Madhabi Mukherjee couldn’t attend the programme where artistes and technicians who had worked with Satyajit Ray were felicitated at 27th Kolkata International Film Festival. However, Madhabi made sure she was present when the Bengal Film and Television Chamber of Commerce (BFTCC) awarded her with the Hiralal Sen Lifetime Achievement award in Kolkata recently.

A protege of theatre legend Sisir Bhadhuri, Madhabi is best known for her role in Ray’s classic Charulata. However, she is one of the few fortunate actors to have worked with Bengali cinema’s triumvirate — Satyajit, Mrinal Sen and Ritwik Ghatak.

At the event, Madhabi was presented the award by filmmaker Anik Dutta, whose Aparajito is running to packed houses. Also present on the occasion was actress Koel Mallick.

Madhabi has been awarded several times. In fact, for the 1970 Bengali film Dibratrir Kabya, she won the National Film Award for best actress. However, the acting legend said getting awarded in front of her own people brought her immense joy.

“I have been awarded in various countries but the honour from my own people in my country holds the greatest value,” she said.

Multiple National Award-winning director Ghose received the Debaki Kumar Bose Lifetime Achievement Award from actor Gargee Roy Chowdhury. Recalling his young days as a filmmaker, the Paar director said, “We wanted to change society through films and theatre. However, that never happened. Society moved at its own pace. However, as filmmakers we have been able to capture the various moments and changing times in our films.”