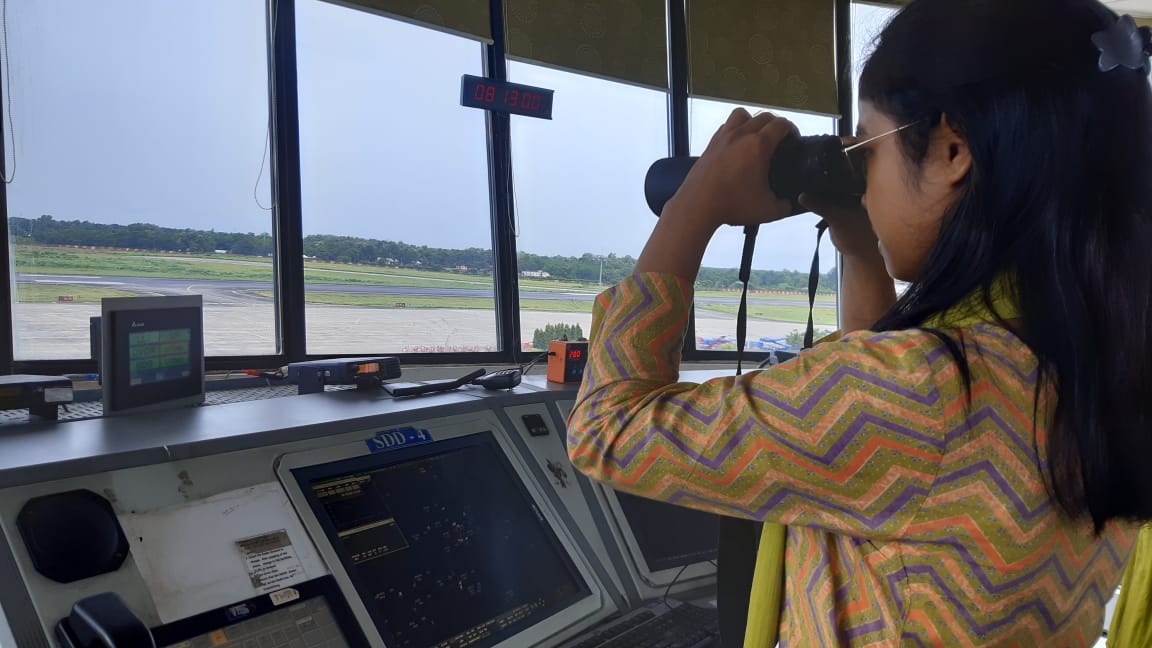 ‘Never give up, until you get success’, is the mantra for 26 year old Bipasha Hrangkhal, already a well known face in Tripura for being the first lady Air Traffic controller from Tripura.

She says, she never counts the number of failures she has faced. “Before joining this job I sat for more than 20 competitive exams but hardly 4 or 5 she can managed to pass, but I never lost hope and passion. But these failures never demotivated me.” Says Bipasha Hrangkhal who was determined to qualify for atleast one examination.

In 2015, I failed to clear the ATC examination in my first attempt. But in December 2017, I finally managed to clear the exam in her second attempt.” Adds Bipasha.
Bipasha, who came from a remote tribal village of Tripura said that if any one is demotivated after their failure, then they lose everything. She worked at Mutha Industries Private Limited as a market executive but when she realized that her dream of becoming an ATC was slipping away from her hands, she quit after 10 months.

After clearing ATC exam she was in six month training period and then she got her first posting at Mumbai Airport. She was there near about 10 months. But suddenly her father Bijoy Kumar Hrangkhal, who was an engineer suffered a brain stroke last year in June and did not recover fully till now. After her father illness she wanted to home town facility from her employer. And she posted at Agartala Airport on last year. After coming here, one of her bosses told her that she is the first lady Air Traffic Controller (ATC) from Tripura.

But Bipasha was not sure whether her father understood this news of being the first lady ATC of her State. Bipasha’s father, Bijoy Kumar Hrangkhal is bedritten and is not in the health. But in her childhood Bipasha used to watch air craft investigation serial at national Geography channel with her father and was fascinated to after watching those shows and wished to be a ATC. She said her fascination for a job of Air Traffic Controller started in her early childhood when she used to watch.
She said, “The first thing I came to know about this job is that it was going to be stressful. “I had to be responsible for so many people who were in the air. There was a high degree of safety involved with the job which made me attracted to it, she said.

On her ambitions ahead, the grounded girl says she wants to be a happy person with a stable income to take care of her family in future. Professionally, she wants to gain radar ratings as a successful air traffic controller. She comes from a very remote village of Kowhai district. Her father Bijoy was an engineer and mother Swapna is a house wife. Bipasha has a younger sister also, who is in college now.
Sachin Devbarman who is Bipasha’s boss at ATC Agartala, is the first air traffic controller from the State. He said that Bipasha is doing well while Agartala airport director Vipin Seth also praised her.
Bipasha joined as air traffic controller one and half years back her first joining was at Mumbai. Bipasha has been posted at Agartala airport since the last eight months.