Mighty Sunderbans should not be a lost glory after cyclone Amphan 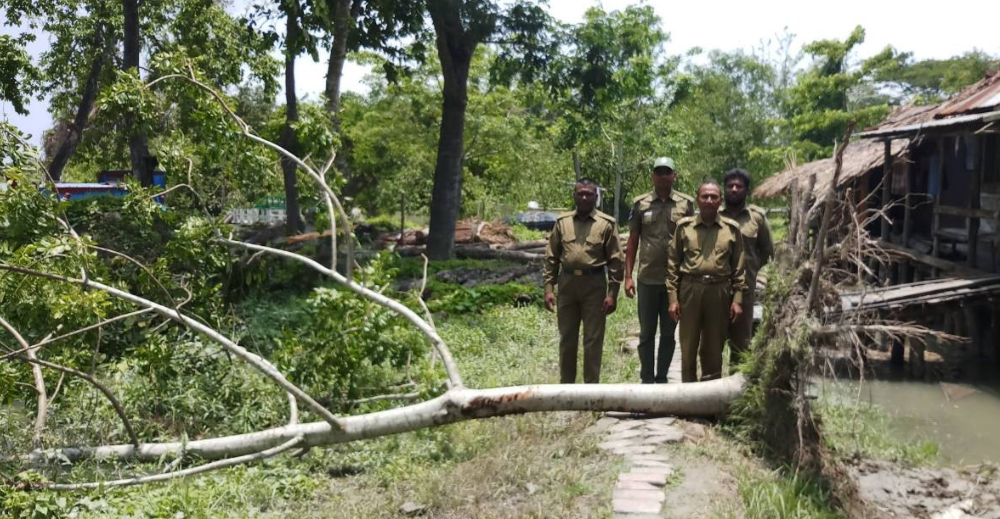 The Sunderbans which is known to be one of the most beautiful forest in Bengal is now in ruins in the aftermath of cyclone Amphan which lashed out at West Bengal on the 20th of May. The mangroves which are indeed spectacular and attract tourists will not be a tourist attraction for now, with areas inundated and the beauty of the Sunderbans which is replaced by a gloomy look. Small villages, the cattle, enormous fields have now almost vanished.
Cyclone Amphan devastated 6 districts of West Bengal, 3 districts of Odisha and parts of Bangladesh a week ago and West Bengal is still reeling under tremendous damage to people and property. Sagar islands in Sunderbans was the worst hit, as the cyclone made landfall there. Cyclone Amphan swept right past Kolkata last week, at a speed of 175 km/hr and touched 185km/hr in villages.

The cyclone caused havoc and destroyed several villages and houses leaving tons of people homeless and without a roof even in urban pockets of West Bengal, with horrific scenes of trees being uprooted, people being electrocuted and roofs flying due to the strong winds, along with no electricity and strong gusty wind speed.

How Bad Has Cyclone Amphan For Sunderbans Compared To Other Cyclones?

The Indian Metrological Department(IMD) had forecast the super cyclone, which was originated over the Bay of Bengal, to be the worst in decades to hit West Bengal. The last biggest cyclone was in the year 1999 which caused major destruction in Odisha. All villages and rural areas had their shelter homes ready and cyclone shelters were put up in order to give proper and adequate protection to people who had to be evacuated from danger zones, moreso in coastal regions. People staying in mud houses and low lying areas were evacuated.
Adequate steps were taken by the West Bengal government to evacuate people in Sunderbans and other coastal areas like Digha in East Midnapore district where the cyclone was to cause major devastation, but the cyclone caused devastation nonetheless. The city of Kolkata was shaken completely, but some places which suffered the worst like the mighty Sunderbans especially areas like Kakdwip, Sagar islands, Namkhana and Pather Pratima which had not seen such a terrible disaster over the past few years.

Cyclone Aila in 2009 was the last cyclone to cause major devastation in the Sunderbans.
People residing there are left with almost nothing. Bhokto Purkayastha, an active member of the Sunderban Social Developpment Centre (SSDC) is depressed and is clueless about from where to start. “The entire Sunderbans is in ruins and we have nothing left here. Houses and fields are under water. People have no drinking water and the salty sea water is mixed with drinking water. Most people are homeless and do not know where they will stay. Lives of thousands of people have been shattered. All their belongings have been washed away.” Said Bhokto Purkayastha.

Purkayastha further explains, “Crops in the field have been covered in water and are stale. So much of destruction has occurred here and it is 3 times the damage which has happened in the city. We are not getting any financial assistance from the state, but we are getting developmental assistance to some extent. They have provided tarpaulin but it is not sufficient for every family.”

Purkayastha also laments how they together have created shelter homes and cyclone shelters for people during the cyclone, but people will be getting out gradually in order to get their bare minimum basic necessities. “We will be having board meetings with several government officials and panchayat leaders to decide on the future course of actions. It saddens me to understand that there is nothing left anymore. We have to start from zero and build everything again.” Adds Purkayastha.

People have suffered immensely and so have the animals here. Many animals are dying here out of hunger. Joydip Kundu, General Secretary of ‘Sher’, who works with the Tiger Reserve Conservation spoke about several problems faced by village dwellers in the Sunderbans and the way ‘Sher’ had been assisting them throughout the journey. Cyclone Amphan has destroyed villages and ‘Sher’ has already started supplying relief material to all homeless people, including heavy gauge, large tarpaulin sheets, containers to stock drinking water. Other relief material ‘Sher’ has supplied include soap bars, ORS sachets to fight stomach disorders and fruits vegetables. ‘Sher’ has also arranged for a community kitchen.

This first phase of relief was distributed with close monitoring of the Sundarbans Tiger Reserve authorities. “We sincerely thank Dr. #AnishAndheria and #WildlifeConservationTrust for standing by us in the hour of need. We genuinely salute the guidance of SHER’s chief advisor Mr. #ArindamSil for giving us the right direction yet again. We sincerely thank Mr #RajChakraborty for being an extraordinary friend. We are immensely thankful to Mr. #PrasenjitShome – Assistant Commissioner, #KolkataPolice (Traffic) and his team of Howrah Bridge Traffic Guard for assisting us in preparing the relief operation.”
The second part of the tweet reads, “We sincerely thank Mr. #BittuSahgal, Mr. #DebarshiDuttagupta, Mr. Ambar Roy, Prof. #SilanjanBhattacharya, Mr #ParthaDey and every individual who made this possible with their unmatched support. We earnestly acknowledge Field Director, Dr. Sudhir Das IFS, Dy. Field Director Mr. Deepak M IFS, Assistant Field Directors Mr. Anindya Guha Thakurta WBFS, Mr. Soumen Mondal WBFS, Mr. Biplab Bhowmik, Forest Ranger, Mr. Biswajit Das, Forest Ranger. Each and every field staff of the Sundarban Tiger Reserve for being our strength.” Said Mr Kundu.

A lot of efforts have are being taken to restore Sunderbans and build a shelter for the homeless. We can pray for all the homeless, that we get our mighty Sunderbans back again and all people have a roof over their heads in the days to come.