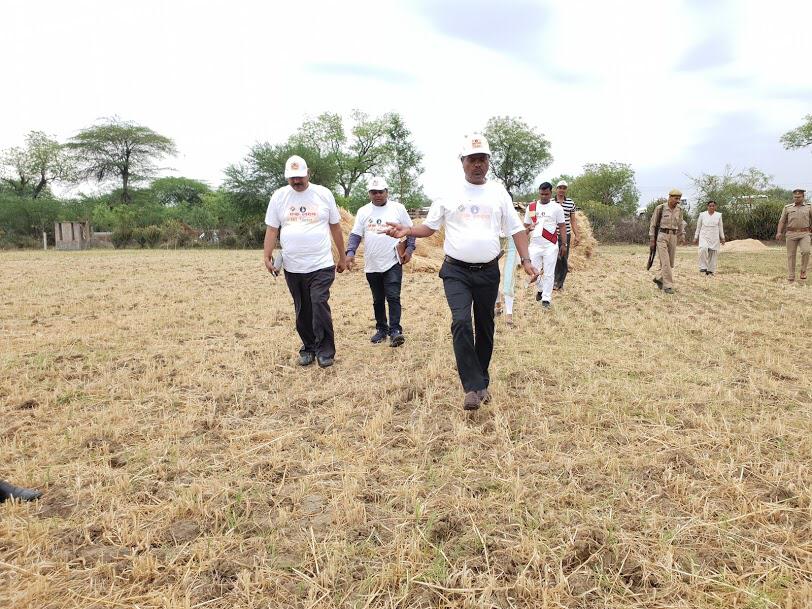 Recently Dr. Rajiv Kumar, Vice Chairman, NITI Ayog, has appreciated the efforts of Dr Heera Lal IAS to transform rural and downtrodden villages of Uttar Pradesh into Model Villages through active public participation. In this article we have tried to capture the concept of Model Gaon program and how it can lead to India’s holistic development.

The Model Gaon project is based on the development innovation Dr. Heera Lal had brought about in Banda when he was posted there as the District Magistrate from August 2018 to February 2020. “I did many experiments and innovative projects at Banda and we got good results. The Model Gaon initiative is based on the outcomes or achievements at Banda in the field of water conservation, rural employment, digitization of villages and many others,” Dr. Heera Lal IAS said. Click on the Google Drive link below to learn more about his initiatives at Banda:

Banda had witnessed the highest voting percentage in the Lok Sabha election 2019. Prime Minister Modi had praised the Banda administration during his election campaign. The NITI Aayog report had also mentioned the success of Banda in the field of reducing malnutrition. Many prison-reforms were also undertaken in Banda under Dr. Heera Lal’s watch. Similarly for students, an Officer for One Day program was launched.

“To think and work on such changes in such areas is the foremost challenge,” highlights Dr. Heera Lal. The officer has three mantras to his governance technique. “Firstly, I focus on convergence of available resources, funds, inputs, and ideas in one place. Secondly, I ensure proactive participation of all stakeholders. Thirdly, we take up such activities which have either no cost or low cost,” he shared.

Talking about the appreciation tweet by Niti Aayog’s Vice-Chairman, Dr. Lal said, “It is an honour that one of the top think-tanks of India has endorsed the concept of Model Gaon. It will boost the morale of all the stakeholders.” Presently Dr. Heera Lal IAS is posted as Additional Mission Director at UP National Health Mission. Learn more about Dr. Heera Lal and his vision by clicking on the link below to access his website.

India lives in the villages

The idea of rural development is familiar to many but the concept of Model Gaon is not talked about though it is an age old idea. The Model Gaon initiative is inspired by the idea of Gram Swaraj of Mahatma Gandhi and PURA (Providing Urban Amenities to Rural Areas) of late President of India, Dr Abdul Kalam.

Usually we carry out development projects in villages in isolation. However, Model Gaon aims to carry out holistic development of villages so as to convert it into an ideal one. “Villages should also have equal opportunities and the same amenities as any other place. This would strengthen the rural backbone of the country which would also have an impact on urban India,” Saurabh Lall, the CEO of Model Gaon said. It is remarkable that many have come together and are working to realize that goal.

“The Model Gaon initiative took shape in January 2021 when it was brainstormed that if the same format of people participation for development at Banda is utilized for any other cluster, it could result in a good development model. We believe that India lives in villages and unless we strengthen our villages we will not be able to make India a superpower, ” informed CEO Saurabh Lall.

Working of the program

A Village Manifesto comprising 25 development indicators like cleanliness and sanitation, education, and health have been prepared. Villagers are being educated on these parameters and a sense of participation is being created.

Development schemes are usually prepared in cities and deployed in the villages. The actual beneficiaries rarely participate in the planning process. “Bringing in a change to that narrative, we are making the villagers knowledgeable and informed enough, through education and awareness, to be able to have a dialogue with policy makers. We aim to democratize the process of planning. A village development scheme should originate from the village itself because the villagers are more aware of their needs,” Saurabh Lall stated.

The Model Gaon team is in the process of building awareness among villagers. In 10 Gram Panchayats the team has collaborated with the local panchayat officials and co-creating a village development plan with them. “We handhold them and inform them about various government policies and government benefits,” informed the CEO. A team of experts in various fields has also been deployed to assist the villagers.

The Model Gaon team is also engaged in finalizing agreements with some prestigious institutes who have adopted villages. “We would be joining hands with them as partners to develop those into ideal villages,” Saurabh Lall said.

As soon as the planning phase is over the program implementation will start in 5-12 villages by the end of 2021.

‘Digital Divide’ would be a thing of the past

“Once you are familiar with any digital application your initial resistance to technology comes down and you start adapting other technologies as well and understand their benefits. People in rural areas are wise and intelligent. Hence, if a correct and genuine value proposition is put to them they understand and adapt it,” he added.

“We are moving in the right direction and we are confident that digital divide as a term would cease to exist in rural India in the near future,” assured the CEO of Model Gaon.

Initially, there was some level of vaccine hesitancy among the villagers. So the months of April and May were dedicated only for Covid literacy. A team of Corona warriors operated in multiple districts visiting and talking to the villagers and making them understand what kind of safety precautions and protocols should be followed and why they should take the vaccines. Many webinars were conducted as well, where reputed medical practitioners were invited who helped in allaying fears of vaccines among the villagers. “We were able to communicate with the villagers and make them understand the idea behind vaccination. This created a positive impact,” Saurabh Lal said.

During the pandemic much importance was given to inculcate the idea of adapting a healthy lifestyle among the villagers. “While there are infrastructural challenges in the villages, due to increased awareness among the villagers we are now better prepared for the third wave,” the CEO shared.

While Model Gaon is actively engaged in UP in terms of actual adoption of villages, they are open to collaborations in other states as well. They are recently trying to explore opportunities in Uttarakhand. In terms of awareness programs Model Gaon has already worked with several states like Gujarat, Maharashtra, Tamil Nadu, West Bengal and Kerala.

“Though there are cultural and demographic differences, the ethos of rural India is fairly uniform across all the states. The challenges the people in villages face is fairly standard to a certain extent. Every time we speak to people of other states we are able to resonate with their problems and they are able to identify with the kind of solutions that we propose as well. We are also thankful to ICICI Foundation for extending their support towards our program,” CEO Saurabh Lall added. To learn more about Model Gaon visit their website at https://modelgaon.org/en/

Dr Heera Lal IAS advised, “All officers or social workers who have left their villages and settled in some other place should make efforts to develop their village in order to repay the debt of the soil.” Dr. Heera Lal hails from the village of Bagdeeh in the district of Basti. He is presently living in Lucknow and working towards developing his village.