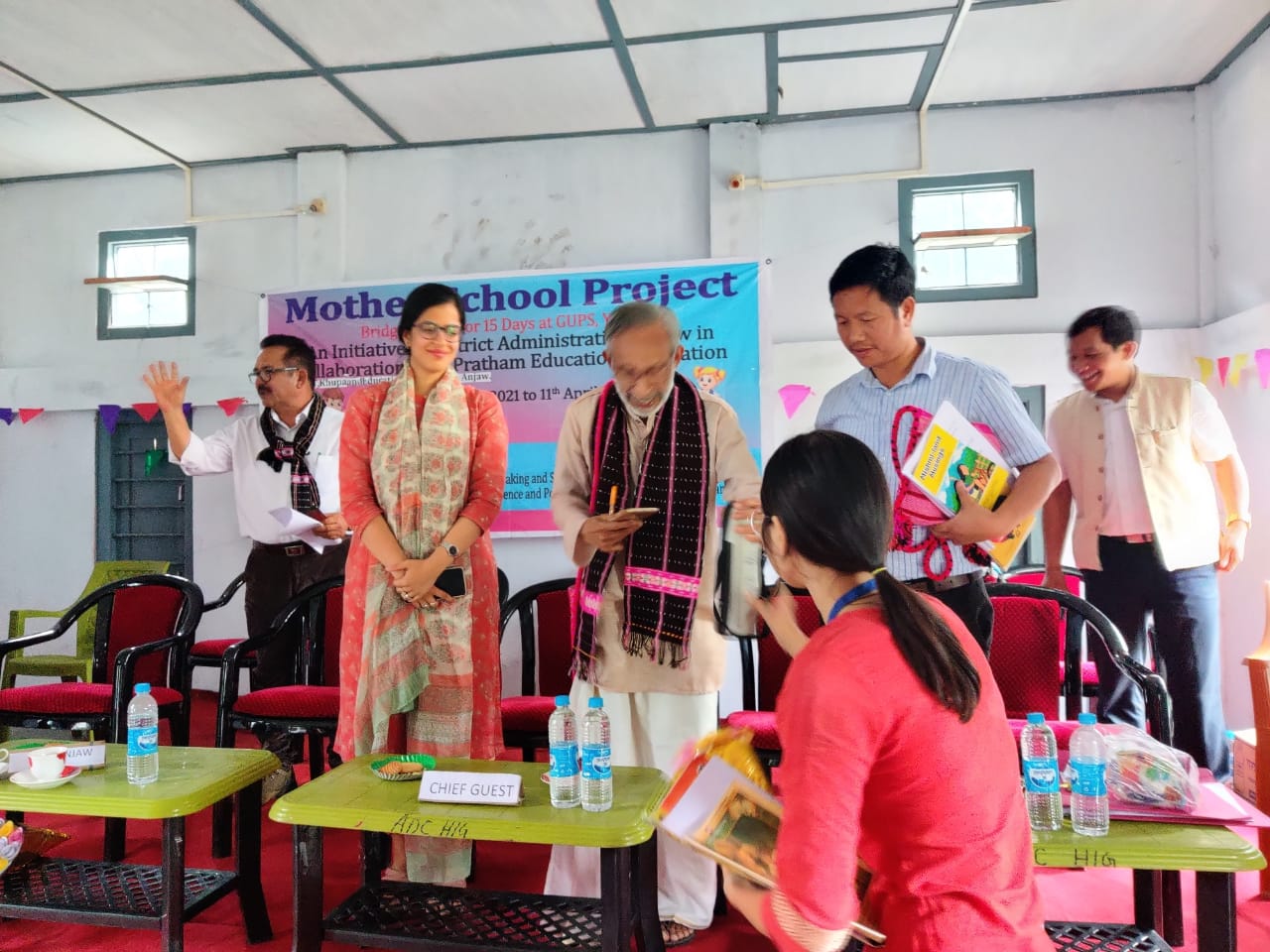 The Deputy Commissioner of Anjaw district in Arunachal Pradesh, Smt. Ayushi Sudan IAS has launched the ‘Mother School Project’ at three government upper primary schools to improve the learning outcomes across all the schools and bridge the learning gap persisting in this remote district.

Three residential schools at Yatong, Metengliang and Khupa located at different blocks of the district, were identified. Each of them was linked to six feeder schools which were in a radius of 10-15 kilometers of the main residential school also called the ‘Mother School’. The children of the Mother School and its respective feeder schools were brought together in a residential camp where a bridge course was conducted by some specialized resource persons over a period of 15 days.

The district administration of Anjaw collaborated with Pratham Education Foundation; a Delhi based innovative learning organization that has expertise in improving learning outcomes across India. “We used their tools to access the kids and find out whether they fall under Beginner, Intermediate or Advanced level in September 2020. We found that most of the results were not satisfactory,” said the Deputy Commissioner.

Eventually a block compilation report was formulated which was shared with Pratham Education Foundation. Following this a cadre of teachers was selected from the government schools and trained over a period of 6 days in January 2021 under the aegis of District Institute for Education and Training wherein the teachers learnt certain methodologies that would help in improving the learning outcomes.

On the first day of the camp an assessment test was taken for all the students which was then compiled. Over the next two weeks children and teachers resided together and participated in the bridge course. The expenses of logistics, food and accommodation were borne by the district administration. At the end of the course another assessment was taken and the results were compared with the first one. It was found that children have shown significant improvement and have advanced one or two levels.

In addition, a self defense session was conducted in the morning. Interactive sessions with the doctors, army men, administration or police were also held so that children develop the interest of learning something new every day and do not experience home-sickness or boredom.

The remote location of Anjaw, located at the north eastern tip of Arunachal Pradesh poses serious disadvantage to its inhabitants as many blocks have poor network connectivity while many distant villages have poor road connectivity. Though there are schools in these villages, the number of children enrolled in the schools varies in the range of 10-30 students who are taught by one or two teachers. This leads to poor quality of education which remains unmonitored due to lack of access.

Children in the villages could not read or write as per their grade. The core competencies in English, Hindi and Mathematics were also absent. To make a tangible change to this sad state of affairs, the Deputy Commissioner of Anjaw district, Ayushi Sudan, IAS, took the concerted initiatives towards improving educational standards of these hapless kids.

“Our objective was not only limited to enroll more students in the schools and bring them into the fold of education but also focus on building their core competencies. Students enrolled in schools mostly fail in their tenth board since their foundation remains extremely poor. This leads to most of them dropping out from school,” rued Ayushi Sudan IAS.

To fix the learning gap

The literacy rate of the Anjaw does not present a bright picture. Most parents are not literate and do not take keen interest in their children’s education. However teachers and the district administration are trying their best to motivate children to come to schools and are holding consultative meetings with the gram panchayats to encourage children in getting formal education. The ‘Mother School Project’ was joyous and got active support from the parents. The local community where the three mother schools are located participated and contributed to the program with zeal.

“The growing bond between the children, teachers and parents, gives us hope and we plan to bridge the existing learning gaps and conduct similar programs every three months. We would also like to extend the period to 21 days and cover different geographical locations in future,” Ayushi Sudan, IAS, enthused.

Apart from the effort to reduce teacher’s absenteeism and helping them out with lack of infrastructure in schools, some innovative steps were also taken in recent times. Some schools have been painted artistically so that kids get a friendly and cheerful environment to study. Planetarium shows were also conducted in the district to develop the spirit of scientific enquiry among the students.

It is encouraging to see the district administration at Anjaw taking focused and firm steps to change the educational levels of this remote district.