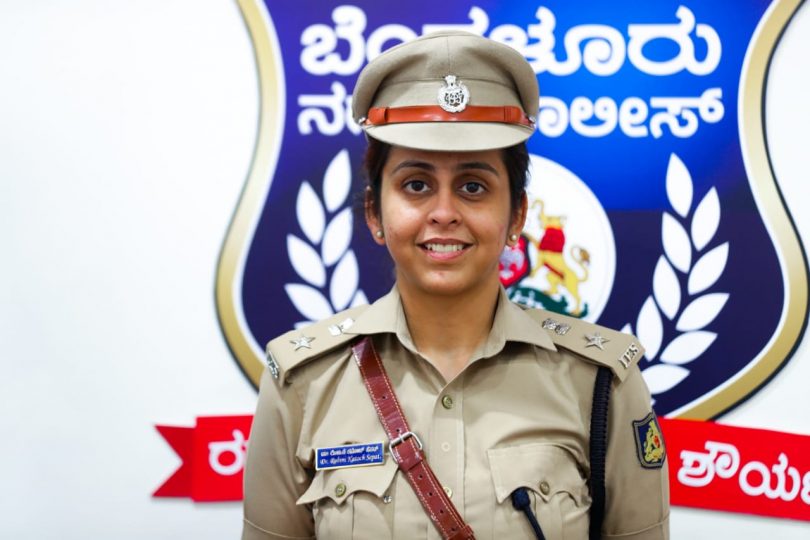 Getting a chance to serve the nation, is like a dream moment for many. Policing, comes under that one selfless duty and citizens sleep at peace at night because the Police is out on the streets protecting them. In times of the Covid-19 pandemic where doctors and Police are seen as warriors, Dr. Rohini Katoch Sepat is a story of an IPS officer who is currently serving as Deputy Commissioner of Police – South Division, Bengaluru City, talks to The Optimist News as she unveils her inspirational journey.

Dr Sepat talks about her parents who are associated with the field of medicine and being the only child, she decided to continue her parent’s legacy. However, while studying to be a doctor, Dr Sepat realized that she will be much better in the civil services, which could be a big opportunity for her. “When I started my training in MBBS, Bachelors in Medicine, I wanted be in the civil service and after landing in the final year of practice, I finally chose to be a civil servant. Luckily it worked for me.” Said Dr Rohini.

The lure of the uniform worked for the Deputy Commissioner of Police too who is a bookworm and questioned herself, whether she can do justice to the post or not, despite being an outdoor person. However, once she dressed in the Police uniform, it was a self realisation moment for her and there was no looking back. She saw a new Rohini in herself.

The Police Uniform Lures Her More

According to Dr.Sepat, white and brown both are trusted by citizens in the time of fear, whether it is the Police uniform or the doctor’s coat. However the brown uniform to her is a reminder of author Mark Twain’s words, which symbolizes the victim and culprit. “Both serve the same gesture, when people are in need they come to us, be it a doctor or Police officer. Nobody comes to us when they are in a happy state. Both are quite a satisfying job at the end of the day. However, it has an individual approach. For us it is a mixture of an innocent victim plus the under belly of society with a criminal mindset of people.” Says the IPS officer who was once a doctor, now enjoys the uncertainty aspect of her job with no regrets left behind.

Being a part of a complicated life make her happy, says Rohini with a tinge of joy in her voice. Not brushing aside the unpredictability of her job, she ponders over not knowing where the next posting will take her to and how long the journey will be which one leads her towards her dream of building her profile as a capable IPS officer.

Working in a male dominated profession with hardly 10% of women in this profession makes her believe that eventually change will happen and girls will rise to walk in her footsteps. “My simple understanding to this situation is that it should be her choice not what society wants her to be. If she wants to be a housewife, let her be. If I do not want to cook, I should not be forced to do so. We should empower a woman to take her own life decisions. Getting her employed or not is not the matter, it should always be what she wants for herself. Then it will be a fair play.” Expressed The Deputy Police Commissioner.
Speaking about the biggest challenge the Police is facing right now, Dr.Sepat is ready to help in her own way even as the Central and State governments overcome the pandemic. “The Covid-19 scenario is once in a life time challenge we are facing. This challenge is little bit different. It is a medical challenge and the Police is playing a vital role in protecting citizens amidst controlling the lockdown.” Explained the IPS

Working With Technology In Modern Times

Giving out a positive approach on modernization, the IPS officer throws light on a city’s utilisation of drones and google maps for the Police especially in markets where vegetable vendors are sitting and people tend to crowd around, during the Covid-19 social distancing scenario. ”Modernization is more about using technology. We are now utilizing a lot of technology including social media. For Bengaluru city we are using drones, Google mapping for the Police to identify even vegetable vendors. Modernization will happen eventually and we need to take it in a positive and open hearted way.” Said the officer.
Click on the link to witness use of drone in the city of Bengaluru.

To be a civil servant was never in Dr.Sepat’s dictionary, but she did not wish to be a mere spectator and wanted to be inside the system. She loves wearing her uniform and is happy to play her role, concluded the IPS officer who believes that God will show her the way. All she has to do is keep walking the path she believes in.