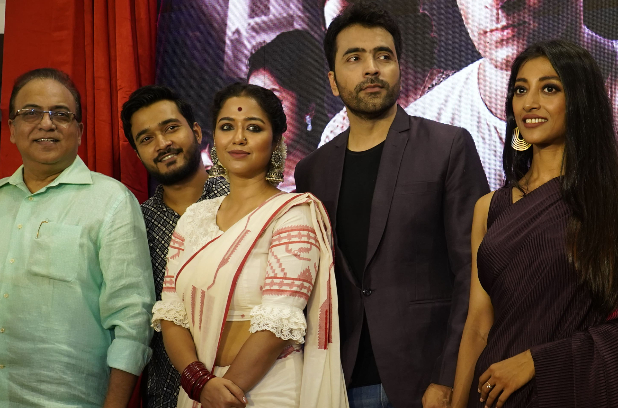 Just like the audience, actor Abir Chatterjee, too, was waiting for Byomkesh Bakshi to return on the big screen. And the wait has been worth it. Abir returns as Bengalis’ favourite sleuth Byomkesh after a gap of four years in Arindam Sil’s Byomkesh Hotyamancha. Joining him are Sohini Sarkar as Satyabati and Suhotra Mukhopadhyay as Ajit.

In fact, this is Abir Chatterjee’s 13th year as Byomkesh. Before becoming Byomkesh for Sil’s films, he had played Byomkesh in Anjan Dutt’s movies too. Undoubtedly, Abir Chatterjee owes a lot to the literary sleuth, who is one of Bengal’s most loved characters. “It goes without saying that the audiences have started recognizing me through Byomkesh. So, every time I play Byomkesh, I think it is my responsibility to give back the amount of love I have received,” the actor said.

Also, this is the third time in Sil’s fourth Byomkesh film that Ajit has been changed. When Har Har Byomkesh happened in 2015, Ritwick Chakraborty played the character. Later, it was Rahul who stepped into the shoes. He was seen as Ajit in Byomkesh Gotro in 2018. And in Byomkesh Hotyamancha, Suhotra will be seen as Ajit. Abir said he enjoyed working with a young talent like Suhotra. “Sohorto is extremely focused and talented. I am sure the audience will appreciate him as Ajit,” said Abir.

The trailer of Byomkesh Hotyamancha was recently unveiled and the makers decided to launch the trailer at a Kolkata mall to create the buzz. Unlike the three previous Byomkesh films of Sil, Byomkesh Hotyamancha isn’t a travelogue. This time, the drama happens at the theatre and Byomkesh becomes a witness to the crime unfolding on the stage.

But the director didn’t quite like the ending. So, he along with Padmanabha Dasgupta (who also plays a part) came up with a different ending.

The trailer starts off showing tumultuous Naxalite uprising Bengal of 1971 and Byomkesh getting involved in a story of vengeance when he decides to attend a play at the theatre and becomes witness to a crime unfolding on the center stage. The beautiful Paoli will be seen in the role of Sulochona, the partner of Bishu Pal and plays the character of Draupadi in their theatrical troupe. Actor Kinjal Nanda, who acted in the critically-acclaimed film Hiralal, plays Bishu Pal. He is a part of a theatrical troupe in the film and plays the director. Arna Mukhopadhyay steps into the shoes of Braja Dulal. Arna is also a part of the same theatre group as Bishu Pal. Bickram Ghosh has teamed up with good friend-director Sil for the 17th time to compose for Byomkesh Hotyamancha.

“Byomkesh Hotyamancha has one of the best casts so far. Also, in these four years, I have realized that there’s no actor but Abir who can play best Byomkesh. I know the audience had to wait for four years to watch a Byomkesh Bakshi film, but I promise they won’t be disappointed,” said a visibly pleased Sil.

This is for the first time two major houses of Kolkata — SVF and Camellia — have come together to produce a Byomkesh Bakshi film. Byomkesh Hotyamancha will hit theatres on August 11.