November is the month of 100 drums wangala festival in Meghalaya 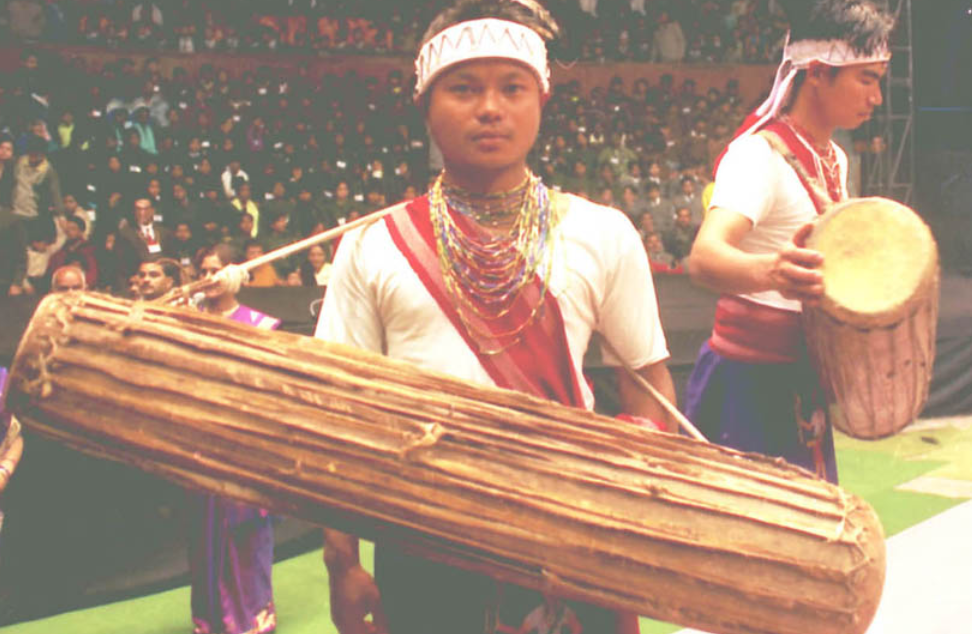 Meghalaya, the rolling hills, and lush landscapes reminded European settlers of Scotland. You can breathe in the mystic and musical air while soaking in the beauty of the hilly terrains resplendent with pine groves. It is the place where you’ll find more than just thunderclouds and teeming green landscapes.

More than just the natural beauty, it’s the beauty of tribal culture, with different traditional dance forms that forms an integral part of Meghalaya. The festivities in Meghalaya seem to be incomplete without dance and music. Dance traditions in Meghalaya are embedded at every stratum of the society, be it Shnong, Raid or Hima.

People are the soul of the state and the songs and dances – vital source of joy. The art of life perfected by the ancestors have been passed down the generations. In Modern times, even though people of Meghalaya are engaged in demanding livelihoods and other activities, festivals are celebrated with equal pomp and gaiety.

The Wangala festival is one of the most important festivals of the Garo people. It is a post-harvest carnival celebrated to mark the end of the agricultural year. The festival is a thanksgiving ritual to the god of fertility, known as Misi-A-Gilpa-Saljong-Galapa.

If someone plans to visit the Garo Hills region this November, make sure you sync your dates with the Wangala Festival happening there around the same time.

This festival is considered to be an integral step towards preserving the ancient Garo heritage and exposing its future generation to the rich culture that is a part of its legacy. Celebrated for the first time in December of 1976, it has slowly gained popularity and attracts hundreds of tourists every year.

Popularly known as The Hundred Drums festival, the festival is accompanied by the cries of the leading warrior who leads the boys and girls to synchronised dance steps, with hand and heads gesturing movements. The festival is celebrated from September to December at popular places across Garo Hills. If one wishes to witness the true traditional way of celebration by the Garo people who still practise their old religion, he/she must visit the ‘Songsarek’ (animistic) villages like Sadolpara in West Garo Hills. However, the modern and commercialised version of the festival is celebrated at Asasang village also in West Garo Hills. The state-sponsored festivals attract local, national and foreign tourists who come to be entertained by the dances competitions, binge on local food, and drinks made from fermented rice popularly called Rice Beer.

The girls in the village perform various dance forms during the festival, while drums and bamboo flutes are played to the tunes of popular folk songs. This traditional dance, choreographed to the sound of drums is known as ‘Dama Gogota’ and this is the reason why Wangala is also known as ‘The Festival of Hundred Drums’.

While the festival is actually three days long, celebrations can sometimes last a whole week. The dances performed during Wangala signify the end of the harvest season and the beginning of winter.

Talking about this cultural heritage of Meghalaya, Metbah Lyngdoh, the Speaker of Meghalaya Legislative Assembly, who is also known to be a person who has vast knowledge about cultural and religious aspect in the state said,

“It is our responsibility to restore, preserve and protect our culture not only because it is our past, or because it is unique or beautiful or about intangible traditions, but our cultural heritage is our identity as it represents our values, belongings, our strength, continuity and our pride. Cultural heritage is a treasure and our children need to learn about it in order to pass it on to the next generations. It is the connections between the past and future, a part of history to understand correctly and learn from.”

Amid the situation created by the spread of the pandemic, the 100 drums Wangala, the annual festival of the Garos was observed with the sound of 30 drums in rhythmic sync to the swaying of the nimble-footed maidens, captivating both the natives and the visitors alike. Calling upon everyone to join hands to protect and preserve the cultural heritage, Metbah Lyngdoh appealed,

“When we protect our heritage, it is the same as protecting our children; both carry parts of our souls and our ancestors’ spirits. It is our endeavour to preserve and promote the cultural heritage of every community since they play an important role in building a bridge of peace within society, bring people closer together and also generate income for the government and in turn help in community development.