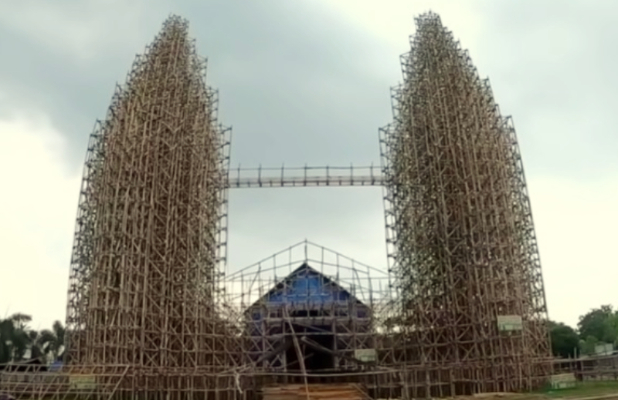 In 2021, all roads led to Sreebhumi Sporting Club when a Durga Puja pandal in Kolkata was modelled on Dubai’s Burj Khalifa. Such was the craze around the crowd-puller puja that public viewing was suspended. In 2022, you can get a feel of Malaysia in West Bengal’s Kalyani. A replica of Malaysia’s twin towers, popularly known as The Petronas Twin Towers, has already started attracting people much before Durga Puja.

Kalyani Luminous Club is known for their innovative themes during puja. However, this time, they have upped their game and are giving stiff competition to Kolkata’s renowned clubs with their replica of Malaysia’s Twin Towers.

With a few days left for Durga Puja to begin, the under construction pandal at Kalyani’s ITI More is attracting a lot of footfall.

The height of the Malaysia’s Twin Towers pandal in Kalyani is 150-feet whereas the 88-storey supertall skyscrapers in Kuala Lumpur stands at 1,483 feet. The Petronas Twin Towers in Malaysia are nothing short of an engineering marvel built using reinforced concrete, steel and glass facade. Kalyani-based Malaysian Twin Towers are being made with ply, wood and glass. Around 70 labourers are working 24X7 to complete the pandal within Mahalaya.

Just like the glass façade, the Durga idol will also be made in glass. The puja organizers have also made elaborate light arrangements to attract the crowd.

“Last year, we saw how a Durga Puja pandal in Kolkata had modelled on Burj Khalifa. It had one tower. However, due to certain problems, the public viewing was stopped. We thought, why don’t we replicate the Malaysian Twin Towers on the 30th Durga Puja celebration of Kalyani Luminous Club,” said William Sarkar of Sarkar Decorators, who’s in-charge of the pandal.

Sarkar also said that they are taking care of the administration so that the puja revellers face no issues when they enter the pandal. He is also elated that their puja pandal has already become a rage online. “We are expecting a huge turnout of crowd for this puja. The theme of our puja has already become viral on social media,” said Sarkar.

Malaysian Twin Towers or Petronas Towers in Kuala Lumpur were the tallest buildings in the world between 1998 and 2004. However, at 2,722 feet, now Burj Khalifa is the tallest structure and building in the world.