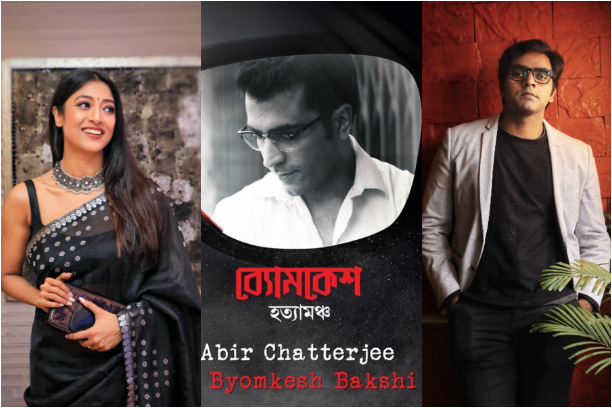 In February this year, we had announced that two major houses of Kolkata — SVF and Camellia Productions — are coming together for the first time for the ‘sake of Bengali cinema’ and ‘Byomkesh Bakshi’. We also wrote that Arindam Sil, a director with an excellent track record with Byomkesh films, would wield the megaphone again. There were no surprises when Abir Chatterjee and Sohini Sarkar were named as Byomkesh and Satyabati. Young actor Suhotra Mukhopadhyay was Sil’s choice as Byomkesh’s sidekick Ajit.

On Friday, the makers revealed the release date and the rest of the cast members. Titled Byomkesh Hatyamancha, the Bengali film will hit theatres on August 11, 2022.

The story of the film, which is inspired from an incomplete Byomkesh story Bishupal Bodh, has an interesting star cast. For the first time, Paoli Dam joins the Byomkesh cast. The beautiful Paoli will be seen in the role of Sulochona, the partner of Bishu Pal and plays the character of Draupadi in their theatrical troupe.

And guess who plays Bishu Pal? Actor Kinjal Nanda, who acted in the critically-acclaimed film Hiralal, will be seen as Bishu Pal. He is a part of a theatrical troupe in the film and plays the director. In the play, he enacts the role of Bhim.

A popular name in the world of Bengali theatre, Arna Mukhopadhyay will be stepping into the shoes of Braja Dulal. Arna is also a part of the same theatre group as Bishu Pal. He will be seen as Kichok, a director-actor.

Interestingly, Bengali author Narayan Sanyal had completed the unfinished story of Bishupal Bodh written by Sharadindu Bandyopadhyay. However, Sil wasn’t quite pleased with the way the story ended. So, he along with his screenplay writer Padmanabha Dasgupta came up with a new ending.  “Apart from Arindam and me, none of the actors know how the story ends,” said Dasgupta, who also plays Pratul Babu, a person of interest to Byomkesh.

Meanwhile, Sil is excited to direct his fourth Byomkesh Bakshi film. “This Byomkesh directorial was altogether a different equation to solve. I think even Sharadindu babu wanted to challenge me with the fourth one and hence the story was kept incomplete. I am hopeful that the audience will shower the same kind of appreciation that we have received in my previous Byomkesh films.”

Set against the tumultuous 1971 Naxalite uprising in Bengal, in Byomkesh Hatyamancha, the sleuth gets involved in a story of vengeance when he decides to attend a play at the theatre and becomes witness to a crime unfolding on the centre stage. As Byomkesh digs deep into the case, it opens him to a tripartite story of love, betrayal and infidelity. Good friend Bickram Ghosh teams up with Sil to compose for the 17th time.