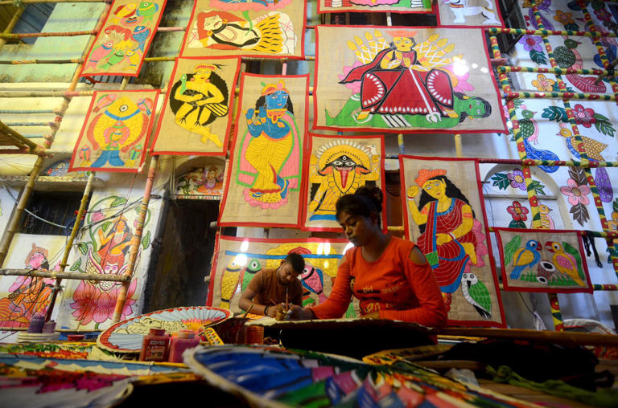 With the theme ‘Aitijhya Beche Thakuk’ – ‘Let the Heritage Live’, renowned artist Prashant Pal, the artisans have created a fictional character, Lalon, who despite his religion draws mythological characters of Hindu.

Bengal’s scroll paintings or patachitra have gained popularity across the world. Over the years, this art has been inextricably linked with various regions of Bengal. From ancient times, the patachitra artisans used to narrate many unknown, unheard moral epics, fables from puranas and historical tales and fantasies in various fairs, cultural events, and religious gatherings through their art forms.

This art was not only used in religious rituals but also enhanced the beauty of the houses of Bengal. The traces of this gorgeous art of patachitra have gradually faded from Bengal. Later, these scroll painters used to explore and portray around Kalighat area of Kolkata, lastly nesting in a corner of this city. Today this art is almost extinct in Kolkata. Today, people in some villages like Pingla, Nayagram of Midnapore district are the last bearers and carriers of this legacy who survive in scattered teams. In addition, another tribal community of Bankura is still trying to make a living from patachitra.

Bhawanipur 75 Palli is one of the eye-catching Durga Pujas of South Kolkata. In Pingla village in West Midnapore, a Patachitra Folk Art Centre has been developed as part of Rural Crafts Hubs, a project supported by UNESCO and the department of micro, small and medium enterprises and textiles, Government of West Bengal. As Durga Puja was awarded the UNESCO tag under intangible cultural heritage list, the Bhawanipur 75 Palli puja organizers thought it was befitting to showcase the rich heritage of patachitra as their theme this year.

“We are elated that UNESCO has recognized Durga Puja as an Intangible Cultural Heritage of Humanity. So, we believe this soon-to-become extinct art form will regain its lost glory and fame through our puja presentation this year,” said Sayan Deb Chatterjee, convener of Bhawanipur 75 Palli.

He also said that artisans involved with the art form belonging to the places like Pingla and Nayagram villages of Midnapore district will perform, display, exhibit and sell their artworks in organized stalls in the vicinity of their puja. “The facilities and all expenses related to transportation, food and lodging will be entirely at our cost,” said Chatterjee.