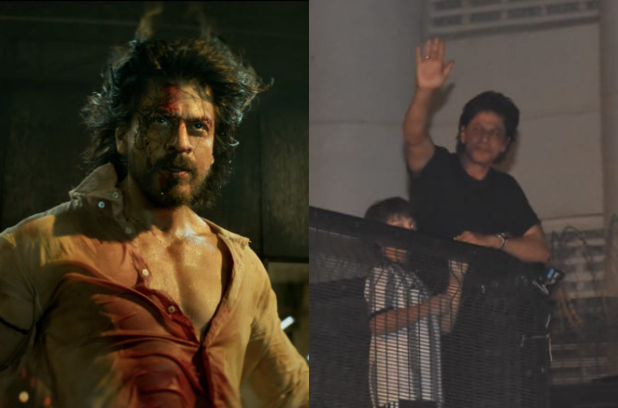 This is all we all have been waiting for. And once it arrived, we can’t now wait for January 25 to come soon. Yes, the Pathaan teaser is here.

It’s the 57th birthday of Shah Rukh Khan and as a birthday gift, he decided to present the teaser of his most awaited film to his fans. And what massive transformation SRK has undergone to play an Indian spy in Siddharth Anand’s directorial.

Sharing the teaser, Shah Rukh wrote in his social media post: “Apni kursi ki peti baandh lijiye (Fasten your seatbelts) Pathaan teaser out now! Celebrate Pathaan with YRF50 only at a big screen near you on 25th January, 2023. Releasing in Hindi, Tamil and Telugu.”

Well, you need to fasten the seatbelts to watch this high-octane action-filled teaser. In a never-seen-before avatar, SRK looks rugged and does a lot of heavy duty stunts. Joining him is the Bollywood beauty Deepika Padukone, who looks stunning in a black ensemble as she makes an appearance in the teaser.

Pathaan marks SRK and Deepika’s fourth project together. In 2007, Deepika made her debut in Bollywood opposite SRK in Om Shanti Om and then they co-starred in Happy New Year and Chennai Express – all three movies did well at the box office. The teaser also shows John Abraham, who looks playing an antagonist.

Apni kursi ki peti baandh lijiye…#PathaanTeaser OUT NOW! Celebrate #Pathaan with #YRF50 only at a big screen near you on 25th January, 2023. Releasing in Hindi, Tamil and Telugu. @deepikapadukone | @TheJohnAbraham | #SiddharthAnand | @yrf pic.twitter.com/eZ0TojKGga

It goes without saying, the teaser of Pathaan has all the elements of a classic Yash Raj Films action movie. In fact, the teaser will remind of action and chase sequences from Tiger series, War and Dhoom – all products of Yash Raj Films.

A lot is riding on SRK and Pathaan as the king of romance makes a comeback at the movies after a hiatus. He was last seen in the 2018 movie Zero, which tanked badly at the box-office. Pathaan will hit theatres on January 25, 2023.

Meanwhile, as the clock struck midnight on Tuesday, hoards of fans gathered in front of SRK’s Mannat in Mumbai to catch a glimpse of their favourite actor. And SRK didn’t disappoint them. Looking handsome as ever, SRK in an all black ensemble made an appearance with his son AbRam. He waved, blew kisses, struck his signature pose by spreading his arms, saluted, clapped and greeted his fans with folded hands. He took a selfie with his fans from the balcony.

Live from Mannat. #ShahRukhKhan fans are celebrating this day and are waiting for a glimpse of the man.#HappyBirthdaySRK pic.twitter.com/JpDpg1rA7x

The excitement of FANs at Mannat is unparalleled ! RT if you are loving this atmosphere 🔥 #ShahRukhKhan #Mannat #SRKUniverse #HappyBirthdaySRK pic.twitter.com/4z0nD4ASpg