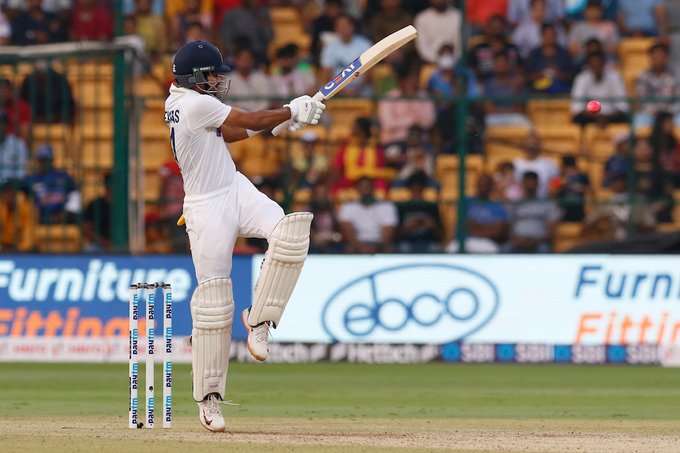 Bengaluru: Sri Lanka were left struggling at 28 for one wicket at stumps on Day 2 of the Pink Ball Test on Sunday as India posted a massive target.

Jasprit Bumrah picked up the wicket of Lahiru Thirimanne (0) to give the Lankans a jolt.

Sri Lanka need another 419 runs to clinch the match. Skipper Dimuth Karunaratne (10) and Kusal Mendis (16) will resume proceedings on Day 3.

Rishabh Pant and Shreyas Iyer’s brilliant fifties, besides Jasprit Bumrah’s 5/24 propelled India to 303 for nine declared, setting a massive target of 447 for Sri Lanka to square the two-Test series on Day 2 of the day-night Test at the Chinnaswamy Stadium here on Sunday.

As of now, it looks like an uphill task for Sri Lankans. Chasing the target, the first innings wrecker-in-chief Jasprit Bumrah struck in the first over with Lahiru Thirimanne trapped leg before.

The opener reviewed, but to no avail. Thirimanne was bamboozled by an in-swinging delivery onto his pads. Sri Lanka were 0 for 1 at that point of time.

Shreyas top-scored for India with a scintillating 67, while Pant cracked the fastest Test 50 by an Indian off just 28 balls, surpassing Kapil Dev’s fifty off 30 which he had smashed against Pakistan in Karachi almost 40 years ago.

Resuming at the dinner score of 199 for five, Shreyas increased his tempo by hammering boundaries off Suranga Lakmal, Jayawickrama, Vishwa Fernando and Embuldeniya.

Shreyas survived a review after he was declared out three short of a 50. However, he got to his second 50 in the Test in quick time.

In the same over, Ravindra Jadeja (22) was cleaned up after Fernando’s delivery clipped the front-pad and then bounced onto the off-stump.

Soon India reached the 250 mark, extending the lead past 400. Ashwin (13) edged one to wicketkeeper Niroshan Dickwella off Jayawickrama.

Shreyas was adjudged leg-before. He tried to review but to no avail TV replays flashed three reds in favour of the field umpire’s decision.

Earlier, India reached 61 for 1 at tea to add to Sri Lanka’s agony. Post-tea, Rohit and Vihari added over 56 runs together for the second wicket. Rohit fell for 46 after Angelo Mathews held onto the catch in the deep.

Hanuma Vihari followed his skipper after he looked to play the sweep but missed Jayawickrama. The Hyderabadi departed for 35 just when he looked solid in the middle. Silence engulfed the Chinnaswamy Stadium after Virat Kohli fell leg-before to Jayawickrama for 13.

After India raced past 300, the Islanders wasted a review. They thought Shreyas might have nicked the ball but it actually had clipped the pads. Soon Pant raced to his 50 after stitching a vital 45-run partnership with Shreyas for the fifth wicket.

Pant was ultimately caught and bowled off a skier. India extended their lead to 342 runs at dinner. As soon he took guard, he smashed the second ball out of the park, making his intentions clear. What followed thereafter was mayhem as he raced his 50.

Bumrah’s five-for was the first-ever on Indian soil, while spinner Ravichandran Ashwin and pacer Shami bagged two wickets each.

Veteran Mathews top-scored for Sri Lanka with 43. Others failed to stick around him.

India were bowled out for 252 in their first innings, with Shreyas missing his second Test ton by eight runs. He had smashed 92 runs off 98 balls, which was dotted with 10 fours and four sixes.