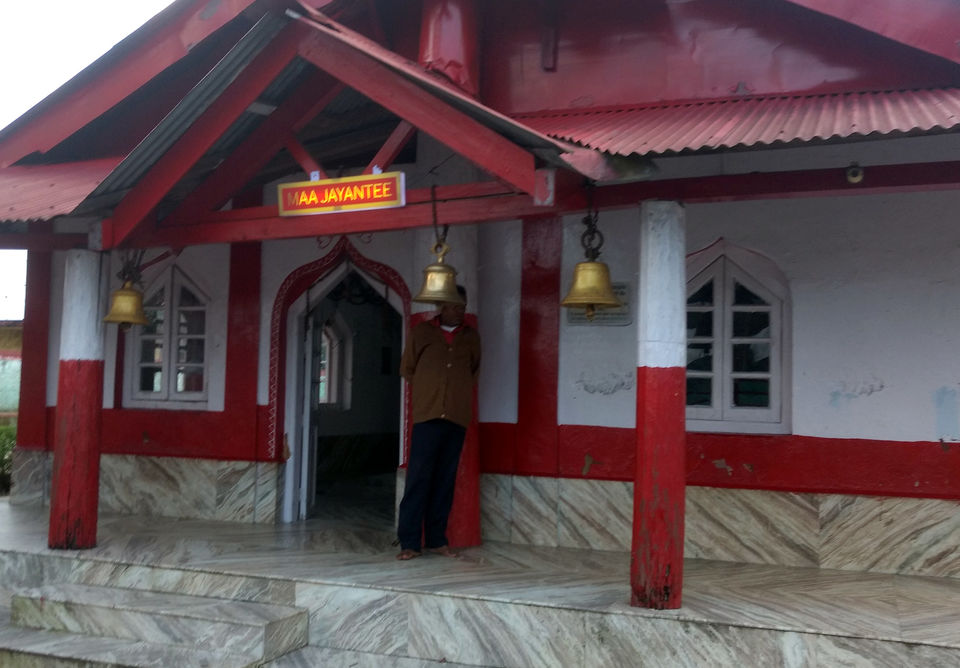 Legend says that Sati’s (goddess durga) left thigh was dropped in the Nartiang village of Jaintia hills in Meghalaya, making it one of the 51 Shakti Peeths of the country. Goddess Durga here is known by Maa Jayantee or Jayanteshwari, the presiding deity of the Jaintia royalty and the temple dedicated to her, is a very auspicious place of worship for the Hindus.

This 500 year old Durga temple can be called the Forgotten Durga temple of Northeast India. The temple houses ancient weaponry of local kings, which gives a distinct look to it. Reviving the historical edifice in 1987, Ramakrishna Mission of Cherrapunjee (Sohra) rebuilt the temple.

To understand more about this quaint temple, we spoke to the General Secretary of Centra Puja Committee JL Das.

According to Das, There are three Shakti Peeths in North East India – Nartiang Durga, Kamakhya Temple in Guwahati, Assam, and the Tripura Sundari Mandir at Udaipur near Tripura’s capital Agartala. Nartiang Durga temple is a little-known but powerful Shakti Peeth with a 500-year-old Durga Temple. The huge monolith (stone pillar) deity of Goddess Durga is the main attraction of the temple and tribal Hindus of Nartiang believe that this temple is the permanent abode of Goddess Durga and that the goddess makes her appearance in different forms. It is also one of the oldest temples in the Northeast.

The spookiest thing about this divine place is the ritual of human sacrifice that was a norm about 100 years back. However, British India eventually abolished the cruel practice.

Nartiang was the summer capital of the Jaintia Kings. Jaintia king Jaso Manik (1606–1641) was married to Lakshmi Narayana, daughter of the Hindu Koch king – Nara Narayana. The queen was a devout Shakti devotee and it is believed that it was Lakshmi Narayana who influenced the Jaintia Royalty to embrace Hinduism.

One night, the Jaintia king Dhan Manik had a dream in which the goddess appeared and showed him a sacred spot in Nartiang where her temple was to be established. The goddess is also said to have explained the special significance of the spot. Following this, the Jainteshwari temple in Nartiang was established.  Since the Jaintia kings used to practice human sacrifice to propitiate Devi Jainteswari, when they required a priest for the new Durga temple, no Brahmin was willing to take the job. As a result the king had to bring Maratha Kshatriyas belonging to Deshmukh clan from distant Maharashtra to take the job of priests in the late 17th century. The present priest of the temple too belongs to that clan and is the 30th generation Pujari of the temple.

Durga Puja is the most significant festival of Nartiang temple, but the rituals are not performed in the conventional way here. They are a blend of Hindu and ancient tribal faith practiced by the Jaintias of Nartiang. Since the practitioners of the ancient tribal faith did not worship any idol, the tradition still continues and a banana plant is dressed up and worshipped as the goddess. The worshippers shoot guns into the air as a salute to the goddess.

Since 2006, the temple came under the direct administration of Central Puja Committee Meghalaya which looks after the maintenance of the temple apart from providing necessary amenities. “During our visit in 2005 we saw the deplorable condition of the temple complex as well as the priest quarters. Following the visit, we took over the responsibility of the temple in 2016 and reconstructed the priest quarters and public toilets. We also provided water connection to the temple,” shared JL Das.