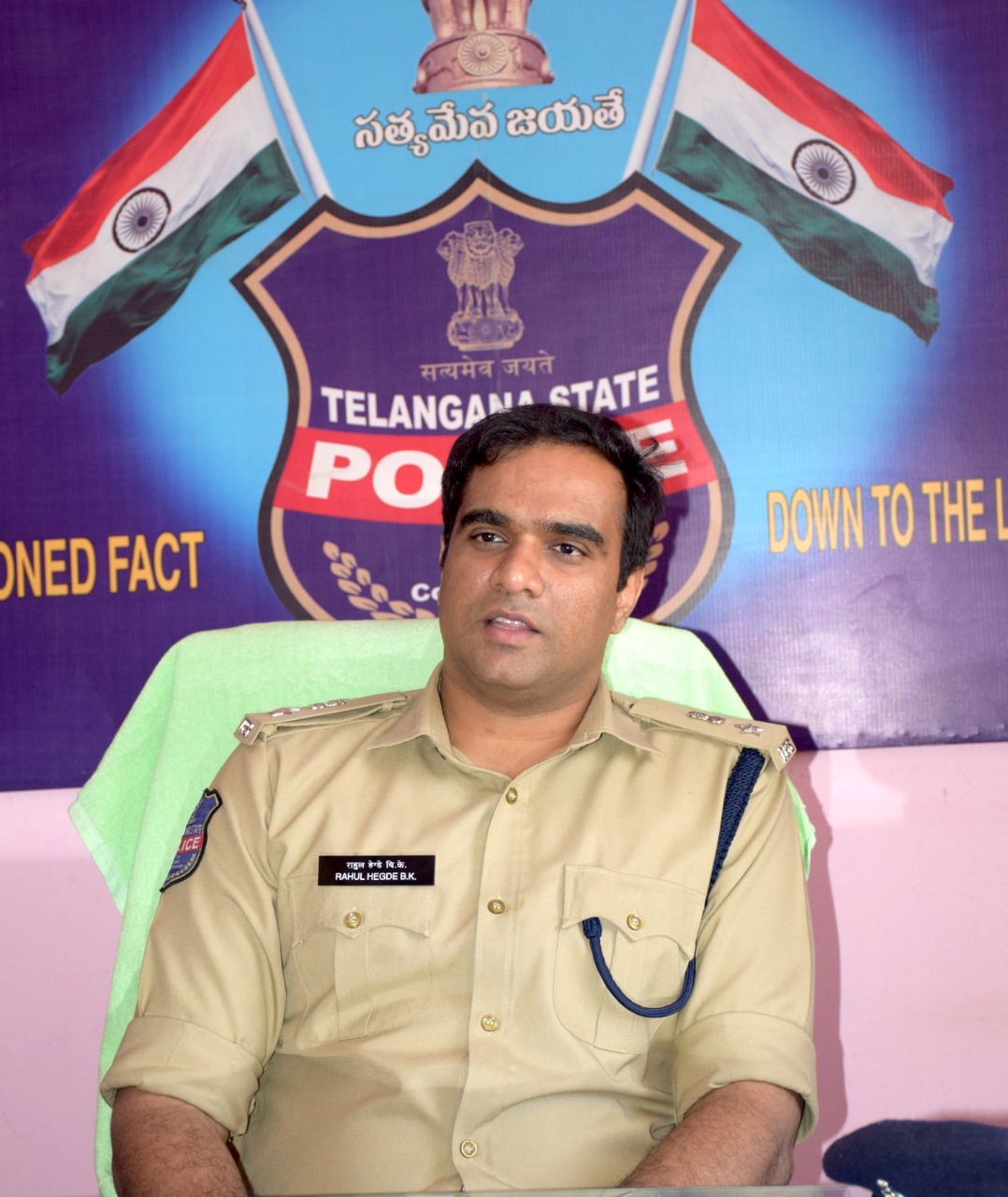 The police symbolize the first point of contact for anybody who is in distress. Men and women in uniform have some inherent power bestowed by the state wherein they can stop a crime from taking place or take some immediate action against the criminal. Moreover, every day poses a new challenge for the police. Every crack in each case is different.

Rahul Hegde as a young boy was always eager to help society and mend the fractures which are within the system and build a better place for the generations to come.

In 2014, Rahul cracked the UPSC and picked to wear the coveted Khaki. He is presently posted in Rajanna Sircilla district of Telangana State as SP (Superintendent of Police).

Rahul Hegde, IPS, was first posted at the Naxal infested district of Eturunagaram of Telangana state which borders Chattisgarh.

Policing in a critical terrain is a sheer challenge. “Responding to distress calls and reaching the place of incidence was difficult at times,” shared IPS Hegde.

“We have to estimate whether the threat call is real or fake. This is because it might be a trap for us. There might be an ambush en route,” he reasoned. “Over here, we do not reveal our identity. We do not wear our uniforms or carry official rifles. Our routes are kept secret,” he revealed.

At Eturunagaram, the police are involved in planning operations by going deep inside forests, planning the routes, finding out if there are any Naxal areas in the vicinity, dominating the area, and at times, convincing Naxalites to surrender. They also recover booby traps and explosives planted below the road by working in constant interaction with central forces like the CRPF.

Thus policing at Etutunagaram at the beginning of his career gave Rahul Hegde, who had been an engineer hailing from Bengaluru a different kind of experience. “Being from a city and shifting to a place which is very rural, forested, having a low density of population and staying inside a compound which had been targeted by Naxals earlier was thrilling. But I was trained for the job. The hectic training that we had to go through as Assault Commander Greyhounds spanning 3-4 months where we would only be engaged in Naxal operations gave me a head start,” he shared.

The challenges at Rajanna Sircilla

Rahul Hegde, IPS was posted at Rajanna Sircilla in 2018. The Rajanna Sircilla constituency is represented by the Honourable Minister, KTR. “Every minor issue can make a lot of sensation in the media. So we have to deal with every issue minutely and cautiously,” Hegde pointed out.

Secondly, the Maner river flows through the district which makes the floodplains ideal grounds for sand mining. Though there are allotted sand quarries for a specific purpose. There might be some leakages. So plugging illegal sand is a challenge that the district police has to counter.

Thirdly, the famous Vemulawada temple attracts a lot of devotees especially on Mondays and other auspicious days. While at other places, it is easy for people to recognize criminals, the temple premises provide anonymity to the public making the place is prone to crimes.

Apart from the usual challenges Rajanna Sircilla is a new district that was formed in 2016. Setting up an entire police administrative unit poses a challenge and a new experience as well.

Previously the district was large in terms of the area making it difficult for any officer to police it. Now it has been made to an optimum size. The public has more access to senior officers in case they have any grievances.

On the other end, all the police stations are now accessible to the officer so that he can manage them on a day-to-day basis.

The number of crimes any supervisory officer can investigate now is less. This provides adequate time to focus on the quality of the investigation. There is considerable focus on preventive policing and proactive policing through regular cordon and search operations.

The public is now confident that if there is no response from the police station the individual can report it to the immediate senior officer in no time. So the overall quality of policing and responsiveness has improved.

Policing for the people

The policing system that had originated in colonial India was meant to be a force created to oppress people. However even today, citizens of independent India have carried on with the same apprehensions.

“We provide certain services on behalf of the government to the public through our police stations. People are usually scared of coming to the police station. If someone approaches any police station, they do not see it as exerting their right. So, to clear their misconceptions we conduct various forms of awareness programs, for instance, on cybercrimes or even through SHE Teams where we educate them about the various legal provisions that they can take when someone is harassing them,” Hegde, IPS informed.

Various awareness drives are also being conducted through the Kala Brundam teams who visit rural areas and conduct awareness drives in the form of skits so that people can relate to them. Through their innovative performance, they narrate stories on contemporary crimes and the legal remedies available for recourse. Similarly many do not know about the services provided by the police like passport verification, police verifications, various permission given by the police, the procedures involved or the legal knowledge like what is an FIR or what are the restrictions. These awareness drives go a long way in educating empowering the people.

The SP shared that at times people bring up problems that are not related to the police department. “Our team communicate those problems to the concerned departments. This is because the police have always been the only visible wing of the government. So it forms our moral responsibility to look after their well-being,” he said.

During the pandemic, there was a lot of miscommunication and misinformation being spread about Covid, the treatment and even the vaccines. If any member of a family contracted covid the entire village used to ostracize the person or the family. So the Rajanna Sircilla Police appointed one village police officer for every village and launched a massive awareness campaign. After some point in time, the villagers got a better understanding of the situation and started enforcing the Covid norms themselves. Many villages also went for self-lockdown. No one was allowed to step in or step out of those villages.

While festivals offer an excuse for every person to reunite with their friends and family, the police department has to stay alert especially at times of festivals.

Even the working hours are not predictable. “It needs immense support and understanding from our families so that we can balance our personal lives,” Rahul Hegde shared.

From our end, we try to ensure that every police personnel can devote some quality time for their friends and family, now and then.

The young IPS officer shared that there is a lot of misconception among the UPSC civil service aspirants which proves to be a hurdle in their journey. While some lack self-confidence and feel that they should have enrolled in an English medium school, others feel that only engineers from reputed colleges get selected. Some aspirants think that only a few Optional subjects are scoring while others are not; others think that getting themselves enrolled in a reputed coaching institute might get them selected.

Rahul Hegde shared, “Every candidate who has cleared this examination had different approaches to the exam tailored to their needs. I had all these apprehensions too. Everyone from my engineering college got placed but I left the job because I wanted to study for UPSC. All my friends had started growing in their respective careers. They were skeptical whether I was making the right decision. But I worked hard and I was able to clear it. Everyone has their own set of problems. Whatever goal you choose, stick to it and give your best so that you have no regrets,” was his message to all aspirants willing to fight till the end.