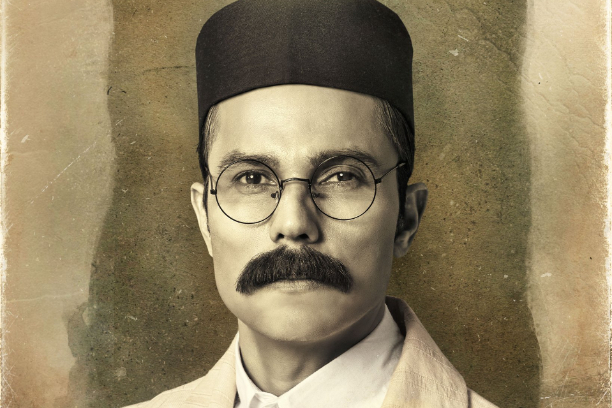 By now, we know that actor Randeep Hooda will be seen as Hindutva ideologue Vinayak Damodar Savarkar. On his 139th birth anniversary i.e. May 28, the actor took to social media to reveal the first look of the film, titled Swatantra Veer Savarkar. The makers have shared the motion poster too.

In the poster, Hooda is seen sporting a Savarkar cap, round glasses and moustache. The entire poster has a sepia-tinted tone. “This is a salute to one of the tallest unsung heroes of India’s struggle for freedom and self-actualisation. I hope I can live up to the challenge of filling such big shoes of a true revolutionary and tell his real story which had been brushed under the carpet for so long,” Hooda wrote.

A salute to one of the tallest unsung heroes of India’s struggle for freedom & self-actualisation. hope I can live up to the challenge of filling such big shoes of a true revolutionary & tell his real story which had been brushed under the carpet for so long#VeerSavarkarJayanti pic.twitter.com/EaiDWQyeLZ

Directed by Mahesh Manjrekar, the film will hit the floors in August 2022.

Manjrekar knew the audiences have different versions of Savarkar in their minds. So, as a filmmaker, he is trying to match the same thought, which Savarkar had. “The character of Savarkar in the film will not have any difference from what Savarkar was in real life. He was the iconic freedom fighter and we’ll ensure that he’s never forgotten ever by any Indian,” said the director of films like Vaastav: The Reality and Astitva.

Sandeep Singh, who had earlier produced a biopic on PM Narendra Modi with Vivek Oberoi, and other biopics like Mary Kom, and Sarabjit, admits that Savarkar never got what he deserved. In fact, the Bollywood producer wants Savarkar to be bestowed with Bharat Ratna and Nobel Prize. “He was the first dynamic hero of India and the only man who could have saved the Partition in 1947. Through this film, I, not only as a filmmaker, but most importantly as an Indian, want to tell the world the facts about Savarkar’s struggle. His courageous fight for freedom, his fearless persona which scared the British, and his commitment for Hindutva till his last breath is heavily inspiring. He is the most misunderstood hero and it is high time that we understand him, and moreover celebrate this rebel,” said Singh.

This is not the first time Hooda is part of a biopic. In Sarabjit, he played the titular role and had to drastically reduce weight. Sarabjit Singh was an Indian Sikh farmer who was convicted of spying in Pakistan and then accused of a series of bomb blasts in Lahore and Faisalabad in 1990. In Main Aur Charles, the actor played the notorious serial killer Charles Sobhraj.

Producer Anand Pandit is glad to have an actor like Hooda on board. “Time and again, Randeep has showcased his skill set as an actor and moreover, shown that he can transform into the character he portrays. But in the case of Savarkar, there is an added dynamic because of his uncanny resemblance to the freedom fighter.”