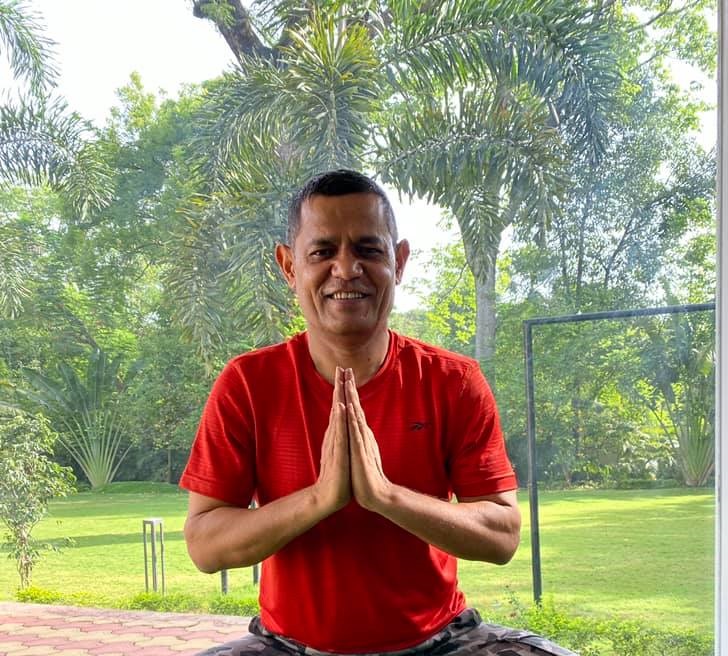 A physical fitness instructor on social media, twice the winner of Police Gallantry Medal and the initiator of Guide the Youth, Grow the Nation campaign – Ratan Lal Dangi, IPS, presently posted as the Inspector General of Police of Bilaspur Range, is a man of many talents.

The 2003 batch IPS officer from Chhattisgarh cadre hails from Rajasthan whose parents were farmers. His father used to motivate him to be an officer of “big” stature. “My father did not know who was a Collector or an SP. In my childhood he used to tell me how some of the officers were doing so much for poor people. He inspired me to study and be someone like them.”

Dangi was a bright student in school and cleared his pre-engineering examination but could not pursue the course due to financial issues. Instead he trained himself as a teacher and in 1993 he started working as a teacher and served for six years. Simultaneously he completed his graduation and post-graduation.

Ratan Lal kept trying to fulfill his father’s wish and appeared for Rajasthan Public Service Commission examination and got selected as a sales tax inspector. He served in that capacity for two years and cracked the state PSC examination again and served as a Naib Tehsildar for two years. Finally, in 2003, he cracked the UPSC and got selected as an IPS officer. “I aimed for the highest level and finally I was able to fulfill my father’s wishes. My journey from teacher to IPS took 10 years,” the IPS officer said.

Being engaged in a profession and simultaneously preparing for UPSC is challenging. However, Ratan Lal’s firm determination helped him surpass all difficulties. He used to wake up early in the morning at 4 am and study till 8am. After returning from work he used to study in the evening as well. “I managed to study 6-7 hours regularly,” he said.

“If you have some goals then you have to sacrifice other things in life. People talk about time management but I would prefer to call it ‘self-management’. Everybody has 24 hours in a day. How you manage yourself and how disciplined you are – are all that matters,” he emphasized.

In 2006, Ratan Lal Dangi IPS was posted as the SP in Bastar, the worst Maoist affected region in India and one of the most serious internal security threats India faces today. Ratan Lal Dangi served in different capacities in the region for almost six years. It was during this time that he launched his Guide the Youth , Grow the Nation campaign.

“I observed that most of the youth were brainwashed by the Maoists and they joined their ranks. To dissuade them from following the Maoist ideology, we thought of guiding them on what is beneficial for them and the country,” he shared.

Other than that, there was another important factor that drove Ratan Lal Dangi towards starting this campaign. “I faced many problems due to my poor financial conditions in my childhood. I also felt the absence of proper guidance and books. It was right then that I decided to guide the youth and the poor, once I achieve my goal,” he shared.

Ratan Lal Dangi also runs several libraries at his native place in Nagaur district which facilitates access to books for poor children. Dangi IPS also helps the youths with books for cracking competitive exams like UPSC, PSC and provides periodic counseling for them to guide them on their career path. Apart from that he also conducts training for recruitment in the army.

“Today many youths have got jobs. This makes me feel extremely satisfied,” he shared.

Being a role model

Ratan Lal Dangi has emerged as a role model for many. “In the villages even if you are a tehsildar or patwari you are the role model for all. They follow you and try to pick up your qualities. Parents want their child to follow us and learn from our experience,” he said.

According to him not only All India Service officers but every public service officer should have the responsibility to set an example. “We inspire the youth to dream and aspire to be officers like us. My aim is to enable every person from the weaker sections of the society to dream that their children too can achieve similar success. So I share my stories with all people around to help them dream big,” the IPS officer said.

Ratan Lal Dangi took to spreading the message of staying fit during the first wave of the pandemic. He has been posting regular photos of himself doing various asanas and physical exercises on social media. One of his videos was widely shared and appreciated by all and many were drawn towards his campaign.

“In the lockdown the young people had to stay at home. So I thought of motivating them towards fitness and started posting videos of my work out sessions. This will also help them prepare for the Army and the security forces,” he shared

Unleashing the power of social media

Today social media has emerged as a powerful tool for the public. It also gives people the power to raise their voices against injustice. Ratan Lal Dangi IPS shares his thoughts and activities to the people using Twitter or Facebook. “This makes people feel free to connect with me. They too can share their feelings, aspirations or even information and concerns. They can even text or call me. Social media acts as an effective bridge between the police and the public. My personal rapport with the public helps in better policing and enables my team to perform better,” he said.

Social media can play an effective role in transforming the image of the police as well. People appreciate when the police share their work on social media. “When I share my yoga, career guidance tips and motivational stories people connect with me at a deeper level,” Ratan Lal Dangi said.

Ratan Lal Dangi IPS reads in his leisure. He often goes through the autobiographies of Ambedkar, Nelson Mandela and Abraham Lincioln and considers them to be his ideal.

For the youth his message is – “Success is your birthright. No one can deprive you and it is your duty to achieve it. For that you need to decide what you want to be, and plan for it and act in the right direction.”

“I have read in Nelson Mandela’s autobiography, that when he was 6-7 years old, his father told him, “You are born to rule”, this thing stuck in his mind and he went on to become the first black president of South Africa,” he shared. For the parents he strongly suggested, “You must encourage your children, guide them, keep an eye on them. If you cannot guide yourself, you need to find people who can.”