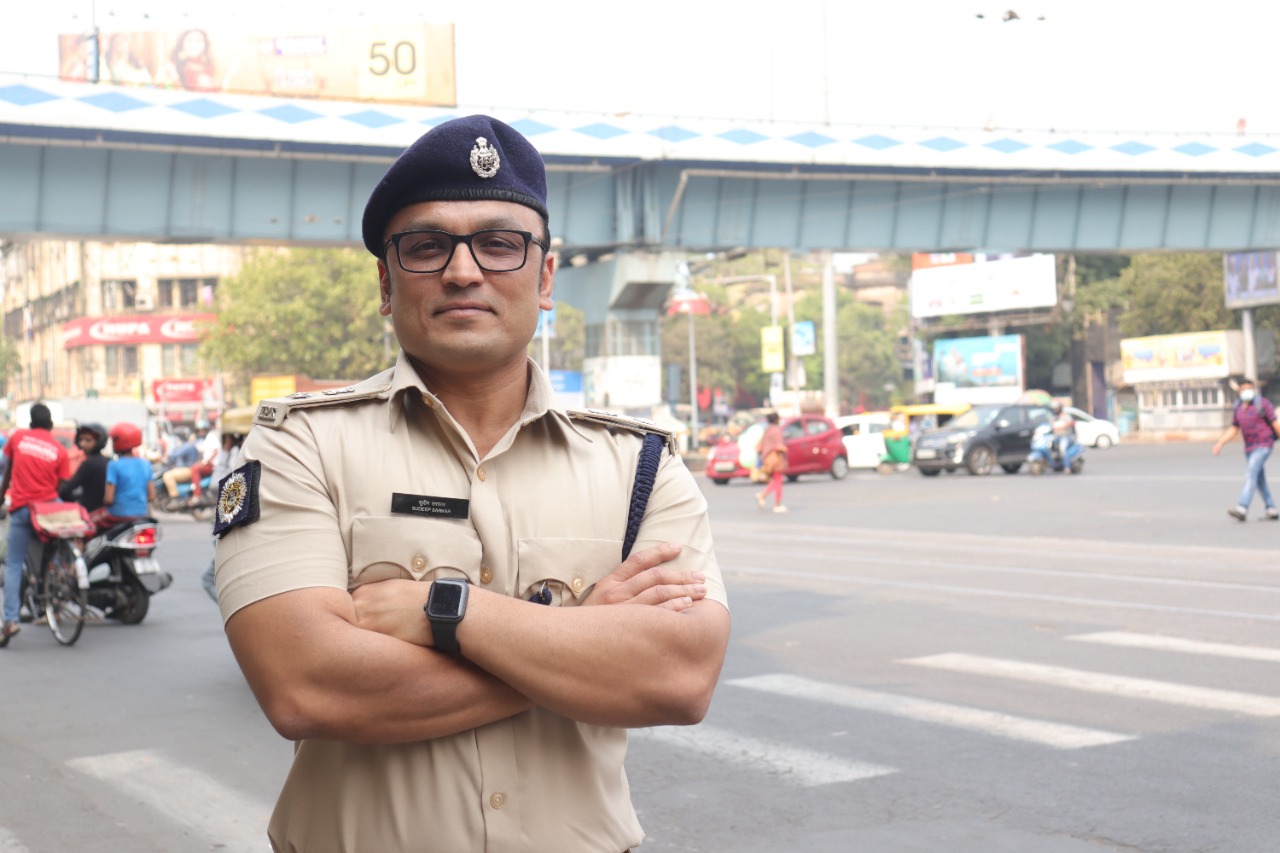 Policing a strategic location like the South-East Division can be quite challenging. IPS Sudeep Sarkar, the Deputy Commissioner of South-East Division, has been instrumental in leading his men from the front in ensuring a safe and secured environment not only to the residents of South-East Kolkata but also to all Kolkatans.

Sarkar was born and brought up in Rajasthan but nurtured a dream to join the police force since his very childhood. He had lived in Bundi, Ajmer and Kota during his initial years. He did his Post-Graduation and M.Phil in Geography from the Jawaharlal Nehru University (JNU).

“JNU has given me the vibrant atmosphere to think and know myself. Through interaction with my peers, I was able to understand my drawbacks and worked hard on them,” Sarkar said. He had been preparing for the UPSC Civil Service Examination since then. It was in JNU that he met his wife, Rachna Bhagat. Both had cracked UPSC together and got into the Civil Services in the same batch in 2009. Rachna Bhagat, IAS is now the Director of ICDS, Government of West Bengal.

In his days at the JNU, Sarkar received a stipend from the Junior Research Fellowship scheme of the University Grants Commission after clearing the National Eligibility Test. “This gave me the financial independence which I believe is essential during that juncture of life,” he added.

After cracking the UPSC, West Bengal was his first cadre. “Since I am a Bengali, it was predestined that I had to come back to my roots,” he said.

Sarkar had worked in the Detective Department in his previous posting. He had also worked as DCP of the South Suburban Division and the Port Division in his earlier postings.

The Kolkata Police is divided into nine administrative divisions each headed by a Deputy Commissioner. The South-East Division acts as a centre of economic activity. Shopaholics can visit the Quest Mall or stroll through the markets of Gariahat. It houses many hospitals like AMRI or the Park Circus Charitable Hospital. The Rabindra Sarobar lake, which is a coveted destination for joggers living in South Kolkata, acts as the lungs of the city and constitutes a very important part of this division. The seat of power is at Park Court, right next to the Park Circus 7 Point Crossing that connects some of the busiest roads of the city, including Park Street, Shakespeare Sarani, Syed Amir Ali Avenue, AJC Bose Road, Circus Avenue, Suhrawardy Avenue and EM Bypass. The division also shares a border with the district of South 24-Parganas.

Investing in policing may not seem lucrative at the outset. However, Sarkar maintained: “If an area is peaceful in terms of law and order and does not have high intensity of crime, that region thrives in terms of economic prosperity and development.” A safe and secure environment leads to a boom of economic activity in the region, drives investment, employment for residents of that place and also generates revenue for the government.

People prefer to live and engage in business in a place that is peaceful and there is no apparent threat to their life and property. Due to these factors, big corporate leaders tend to invest in places where they feel safe. Besides that, it also assures the fundamental rights of a person. Policing, thus, plays a crucial role in propelling the engine of growth in a region.

In developed nations, governments invest heavily in the infrastructure of the police force, both social and physical. Understanding the link between policing and economic factors like boost in tourism, industry, finance, trade and commerce is important for the economic sustainability of any region. “This is precisely the reason why South-East Kolkata is the hub of commercial activities,” says the Deputy Commissioner.

Change in trends of crime

The South-East Division of Kolkata Police houses eight police stations. In four of them (Beniapukur, Tiljala, Topsia and Karaya), having a mixed population, conventional crimes like snatching, theft, pickpockets are common. The Kolkata Police need to be on strict vigil on festive occasions when incidents relating to law and order might occur. However, in the other four police stations Lake, Rabindra Sarobar, Ballygunge and Gariahat — where the population is educated and better off, white-collar crimes like cheating and forgery are more common.

Sarkar said: “White collar crimes related to IT are trending these days. Conventional crimes like burglary and theft are on the decline.” Phishing, hacking, credit card fraud, cyberstalking are the emerging crimes of this century. According to the Internet Crime Report for 2019 released by the USA’s Internet Crime Complaint Centre of the FBI, India ranks third among the top 20 countries that are victims of cybercrime. The FBI report also claimed that criminals are using new techniques in carrying out existing frauds, thereby making policing challenging.

Sarkar was the DC (Special) in the Detective Department when Covid happened. He said: “We witnessed a three-fold rise in complaints related to cybercrimes, which was limited to 600-700 complaints in usual times. Crimes through social media, online frauds, cyberbullying were rampant during the lockdown.”

Overcoming the challenges of tomorrow

The digital age has brought in new challenges for the police force. With the rise in high-end technologies, policing needs to be on the edge at all times. With the usage of IT which is integral to smart policing, the importance of trained manpower to combat emerging crimes has increased manifold.

“Every month, some of our officers go to Delhi or Chandigarh to learn about new softwares and IT products,” said Sarkar. Not everyone is tech-savvy. Policemen take time getting a hang of new-age technologies. However, the emerging nature of crime has necessitated constant skill development and training of the police force. Despite all challenges, the cops are ready for the transition.

A common misconception since colonial times is that any association with the police is perceived with suspicion. A person who has visited the local police thana is considered to have a tainted image. Sarkar disagrees and maintains: “With an increase in education levels and general awareness about constitutional rights, people have started interacting with the police especially through social media. Around half of our visitors have no relation with a crime.”

During the pandemic and the subsequent lockdown, the Kolkata Police had been proactive in helping the citizens with bare essentials. At times, the police had to be strict so that people wear masks, do not venture out in the lockdown, maintain social distancing protocols in order to keep the infection rate low. “It was a difficult time for all of us since we had never encountered such a scenario before. We worked together to make people understand the gravity of the situation,” said Sarkar. The Kolkata Police had been appreciated by one and all for being the visible force present on the ground, selflessly catering to everyone’s needs.

Community outreach programmes devised by the Kolkata Police like Pronam, aimed towards senior citizens or regular beat meetings conducted at the level of local police stations have helped in bringing the citizens closer to the men and women in uniform.

Sarkar has always been a fitness enthusiast. For him, working out acts as a medium to de-stress. “My wife and I are occupied with our work throughout the day. So keeping off from work for at least an hour or two and concentrating on our physical fitness helps us to de-stress,” he said. Despite being infected with Covid, he recovered within a week. “At that juncture, I realised how important fitness is in our lives,” he added.

His life has been challenging without a doubt. A police officer is expected to be on his toes all the time. His story is inspiring for many UPSC aspirants. “Cracking the Civil Service is not a difficult task. I had never been a bright student but I was hardworking,” he signed off with a smile.