Redefining the human face of Policing: 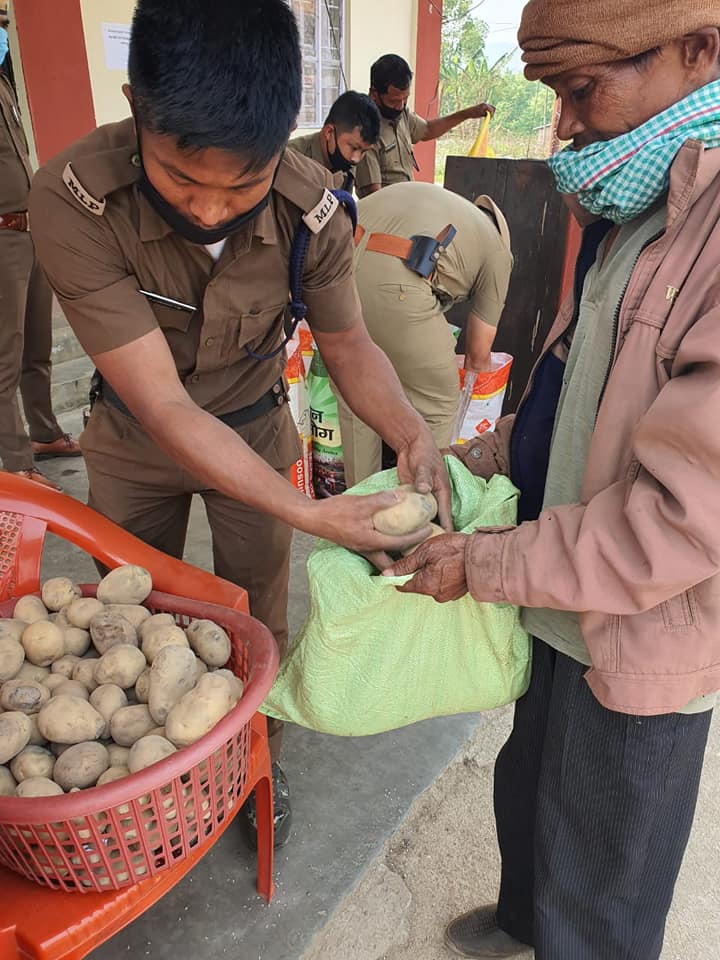 When the nation is living its worst nightmare and battling the most powerful enemy, then some men and women in uniform are braving all odds and trying hard to protect and reclaim lost ground from COVID-19.

Police personnel of the Ri Bhoi district of Meghalaya walked an extra mile to reach to the people who are in dire need of help and assistance during this unprecedented crisis. The men and women in Khaki reached out to the “Shantivan Leprosy Rehabilitation Centre” which houses close to 200 lepers and homeless and donated essential goods. Ri Bhoi a district is populated majorly by the Khasi tribe appreciated this noble gesture of the cops.

“So far we have distributed rice and vegetable, we went to village area to do charity, we went to Shantivan, we also spread awareness about social distancing there,” informed C. Syrti, MPS SP, Ri-Bhoi, Nongpoh.

Pledging to continue to create awareness in entire Ribhoi district the police have urged people to follow the Government advisories.

Leading from the front:

Under the leadership of Superintendent of police C. Syrti, Rib hoi district police have reached out to the villages and distributed rice and vegetables to the poor and needy. “It’s a major task, but our boys took the challenge and distributed the materials properly to the people in need”, assured the top cop of the district.

An extensive drive has also been launched to sensitize the village Defense Parties (VDP’s) and village durbar along the interstate border from Byrnihat to Umden on their roles in fighting the COVID 19.

Ri bhoi police, the silent fighter against COVID19 are doing a laudable job in protecting the denizen.

Catastrophic Lockdown continues, we witnessed the sad spectacle of various section of society.

Ri Bhoi District came into existence and assumed the hierarchical status of the District on the 4th June 1992 by upgrading the former Civil Sub-Division. The District was carved out from the erstwhile East Khasi Hills District and lies between North Latitudes 25 15’ and 26 15’ and between East Longitudes 91 45’ and 92 15’. It geographically comprises parts of the Khasi kingdoms viz parts of Mylliem Syiemship, Khyrim Syiemship, Nongspung Syiemship, Nongkhlaw Syiemship, the whole of Nongpoh Sirdarship (erstwhile Nongpoh Syiemship), Myrdon Sirdarship and the erstwhile Nongwah Syiemship. Presently, Nongwah Syiemship is one of the missing Khasi States that calls for restoration both administratively and territorially. Presently, the District is bounded on the North by the Kamrup, Morigoan and Nagoan Districts of Assam, on the East by the Karbi Anglong District of Assam, on the South by East Khasi Hills & West Khasi Hills Districts and on the West by the West Khasi District. Nongpoh is the District headquarter and as well as that of Nongpoh Sirdarship. Ri Bhoi District contains an area of 2448.00 sq.KMS excluding the geographical areas under the erstwhile Nongwah Syiemship and other places which fall under the ‘Areas of Differences’ between Assam and Meghalaya. Nongpoh is near to the two major cities of Shillong and Guwahati and hence is easy to reach the place. It is located at 53 km away from the Shillong and 50 km from Guwahati.