The footprint of technology is evidently influencing millions of lives as it is essentially changing the way we live, adapt, grow and relate. Everyone is influenced by technology now more than ever. New smarter ways of living are developed every day. But, is there a bigger question that we all need to ask ourselves? The quest for newer and efficient ways has always been a catalyst for technological advancement and research. Today as we face an enormous environmental challenge, can technology play a pivotal role in encouraging environmental chastity? Perhaps yes.

The enthusiastic side of the reality beholds unending possibilities of capitalizing technology to diversify natural world and nurture a stable foundation of growth. Let’s be clear upfront that although possibilities are large, technology cannot alone supervene upon mother nature’s diverse ecosystem perfected over millions of years. We can instead productively optimize technology in various ways to preserve a healthy natural balance and valuing nature as a stipulation for our growth.

Let us explore some technologies that have true potential to collaborate with us, and assist us to broach a journey of systematic cleansing the health of the Mother Nature. Together, with our mindset and behavioural change, technology undoubtedly has the prospective to be a great partner to consider.

In the world of computer science, artificial intelligence is demonstrated by machines or computers in comparison to the natural intelligence displayed by us. Artificially intelligent machines (computers) mimic “cognitive” functions that we associate with our mind, such as “learning” and “problem-solving”. The goal is to include reasoning, knowledge representation, planning, learning, natural language processing and perception in AI capable machines (computers or connected devices) as technology advances. 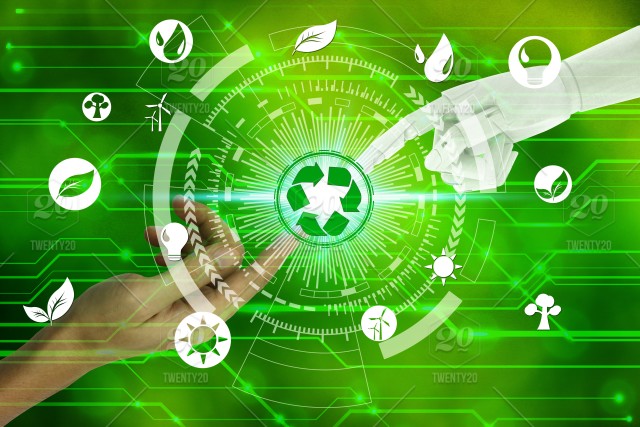 Now, the question is how AI can be used to conserve and protect nature. Let us go around the world and find out some of the innovative ways scientists and technology organizations have collaborated on to conserve, preserve and protect the ecosystem. Conservation biologist Marc Travers is interested in the noise produced when a bird collides with a power line. In 2011, he wanted to know how many of these collisions were occurring on the Hawaiian island of Kauai. To investigate, the team recorded some 600 hours of audio and sent the files (as well as metadata, such as times and locations) to Conservation Metrics, a firm in Santa Cruz, California, that uses artificial intelligence (AI) to assist wildlife monitoring. The company’s software was able to detect the collisions automatically and, over the next several years, Travers’ team increased its data harvest to about 75,000 hours per field season. Results suggested that bird deaths as a result of the animals striking power lines numbered in the high hundreds or low thousands, much higher than expected. “We know that immediate and large-scale action is required,” Travers says. His team is working with the utility company to test whether shining lasers between power poles reduce collisions, and it seems to be effective. The researchers are also pushing the company to lower wires in high-risk locations and attach blinking LED devices to lines.

Conservationists have long used camera traps to help track, monitor, and better understand the ecosystem’s health and biodiversity of wildlife in remote areas. These traps are set up and left for weeks to picture animals as they walk by. Now, AI is being used to classify these animals in real-time, to detect people where they shouldn’t be, and even send out alerts to authorities as needed. Acoustic monitoring technologies running AI algorithms are left in the wilderness to listen, record and analyze sounds of wildlife and nature. Organizations like Rainforest Connection have audio sensors in rainforests to listen to and report chainsaw detection in real-time, allowing park rangers to mitigate illegal logging.

Artificial intelligent technologies are used today to predict poachers and illegal activities. One group working on a project to better allocate park ranger presence throughout the park is PAWS. It uses AI and game-theory to predict where poachers are most likely to lay traps or enter the park and accordingly engage the park rangers. In the first month of deployment in Cambodia, PAWS helped rangers find and seize 1000 traps, twice the amount they usually confiscate. In China, WWF and Intel are collaboratively working on channelling the power of AI to protect wild tigers and their habitats along with other species.

The Drones or unmanned aerial vehicle is an aircraft without a human pilot. It may be operated remotely by a human operator or autonomously by onboard intelligent computers. Drones are becoming invaluable tools for scouting and monitoring efficiently. Equipped with sensors or thermal cameras, it can measure, assist and take precise actions as necessary.

It is used expeditiously by various groups to improve water management in drought-prone areas. Thermal cameras on drones can help detect leaks from reservoirs and water distribution systems, allowing for fast detection and correction. A unique project called the California Heartbeat Initiative-Freshwater monitors the water conditions across various landscapes using drones. The drones have various sensors to track weather, soil moisture, transpiration and other key data.

Drones are proving to be quite useful in wildlife conservation efforts. One example of this is Conservation Drones, a network of conservationists who are using drones to survey wildlife, monitor and map terrestrial and aquatic ecosystems, and support habitat conservation.

Drones allow us to take uniquely angled photographs and count species populations with accuracy. On the other hand, drones are helping us monitor restoration projects by providing high-resolution aerial imagery of vegetation, monitoring changes to the landscape after storms, and generating visuals of land loss and land gain. For example, at Nicholls State University in Thibodaux, Louisiana, students and researchers are using drones, to provide a richer picture of what is happening along Louisiana’s coasts. With drones carrying hyperspectral imagery cameras, scientists are able to discriminate intertidal waters, detect temporal changes in waterways and monitor invasive vegetative species – all important information for better understanding the geography and ecology of our coasts, and working to build coastal resilience. WRI (World Research Institute) has developed Global Forest Watch (GFW), an online monitoring and alerting system, to allow anyone to create custom maps, analyse trends, subscribe to alerts, or download data for their local area or the entire world.

How do you get people to comprehend and understand issues affecting nature? It always seems to be happening in some far-off land, or invisible to the eye, and often on a scale that’s unimaginable.

How about transporting the audience there — to see how much a rain forest is cringing day by day, to witness the savagery of hunters, to see how local people are striving every day to maintain the eco-balance using innovative home-grown techniques, or to see how animal populations are reducing — would it start to make a lot more sense? The world of AR and MR provides the capability and privilege of standing face-to-face with reality, to understand, study and feel it up close. Possibility of connecting us with nature’s reality using technology is certainly flourishing.

In simple terms, a blockchain is a collection of data, called blocks, that are linked using cryptography. A block in a Blockchain is a distributed ledger, which simply means that a ledger is spread across the network among all peers in the network, and each peer holds a copy of the complete ledger. But, how can blockchain be used for environmental sustainability?

It is really interesting to know how various organizations and agencies are already using it. To understand that, we need to understand that a blockchain-based ecosystem can connect the recorder to a digital token, and quantify the energy created in a digitally transmittable form. This would involve connecting a blockchain to a windmill or solar farm or any other energy-producing source, and integrating the flows into the network. Blockchain also enables natural resource extraction, public land management, and pollution levels to be made easily visible to common people and agencies, that might help in monitoring or decision making. Altogether, blockchain offers the ability to transform, digitize and monitor clean energy production and consumption. It will facilitate more proactive decision making for a better tomorrow.

Forming a significant part of the ecology, man has come up with ways to live a safe and sustainable lifestyle for helping the environment. Smart homes to green living and lesser waste are gaining popularity nowadays. Smart cars were developed on the same lines that contribute to reducing the conventional automobile pollution and saves energy.

There are a lot of ways to contribute to the conservation and preservation of the environment with technology. Most of these applications are widely used and have brought about significant changes. However, this effect can be made extensive if the technology is made to reach out to a lot of people to educate and train them in implementing it to the best of its abilities.