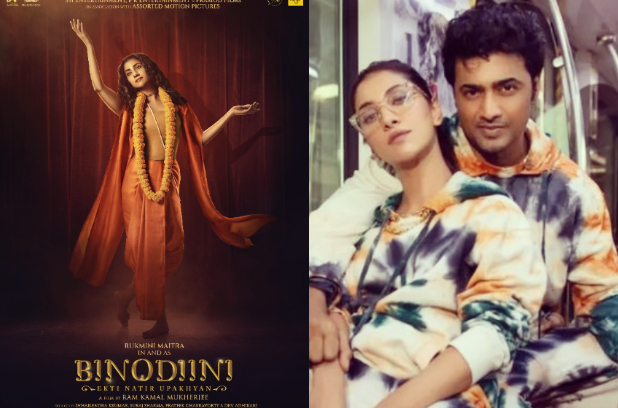 Journalist-turned-filmmaker Ram Kamal Mukherjee has always wanted to bring the story of Binodini Das, the Bengali theatre legend on the big screen. In fact, during a conversation with the correspondent for the promotion of his film Rickshawala before the Covid-19 pandemic, Ram had mentioned how he was on the look out for a producer who would back his ambitious dream. It took him more than two years but then, his dream did come true.
On Teacher’s Day, the Season’s Greetings and Cakewalk director unveiled the first look of his most ambitious directorial venture – Binodiini Ekti Natir Upakhyan. And Sanak actress Rukmini Maitra, who plays the iconic role, is almost unrecognisable as Shri Chaitanya Mahaprabhu, a character that Binodini Dasi played on stage.

In fact, for the last two years, the Kishmish actress has been learning Kathak and reading various books depicting the social status of women in that era. She didn’t even let her mother and closest friend Dev know about her preparation. “Ram first told me about the project in December 2019. Earlier, he had offered me a short film, but it was the film on Binodini Dasi, which stuck with me. I started learning Indian classical, gained weight and read about her. Even my mother and Dev didn’t know anything. We did a photo shoot and then the pandemic struck. Everything changed for all of us,” recalled Rukmini.

To me this is not just cinema, but a Tribute to the "Queen of Indian Stage" who carved the way and inspired many generations of artists.
A story untold, a Woman's journey amidst patriarchy to Unfold.
Need All Your Best Wishes, Blessings, Love & Support for this.🙏🏻#BINODIINI pic.twitter.com/uQVD5tr5tm

After two years, the film is finally back on track. There was a time when Ram struggled for producers and now, he has some of the biggest names backing his ambitious projects. 1770 producers Shhailendra Kkumar, Suraj Sharma and Prateek Chakravorty have joined hands with Dev Entertainment Ventures for the film. Dev will present the biopic and Rukmini says, his coming on board as presenter makes this movie a “magnum opus indeed.”

“It’s a dream come true for me. Since the time Ram told me about Binodini, I knew I could trust him blindly. Ever since the first look of the film has been released, I have been inundated with calls. I have received calls from 86-year-old grandmothers, which is simply astounding,” said the Cockpit and Switzerland actress.

Ram remembered how Rukmini stood by him like a rock throughout the entire process. “I had to struggle for almost two years to get the kind of budget I was expecting to mount a musical film like this. It was Rukmini, who has always stood by me. Since she saw my work in Season’s Greetings and Ek Duaa, she believed that I could probably handle the pain and journey of this mega star from Bengali theatre,” said Ram. However,  he is yet to finalize the casting of key characters like Girish Ghosh, Amritalal, Jyotindrinrath, Ramkrishna, Kumar Bahadur and Ranga Babu.

While Priyanka Poddar has written the story, screenplay and dialogues of Binodiini Ekti Natir Upakhyan, Kacher Manush‘s Modhura Palit will helm the department of cinematography.

Interestingly, Dev didn’t know that Rukmini and Ram were planning a film on the iconic Bengali theatre personality. But the actor-producer is happy to back a film revolving around a woman protagonist. “I told Rukmini that playing someone as iconic as Binodini Dasi is almost like walking on fire just like I did with Chander Pahar. The audience would be critical. But she has been doing a lot of hardwork with the character. We need to make these kinds of films, which will stay with us and will let us know about our history and culture. Films are not always about box office. Dev Entertainment Ventures has backed projects like Habu Chandra Raja Gabu Chandra Mantri. I have known Ram for a long time and I have faith on him. Binodiini is such a project, which I know will forever stay with the audience,” said Dev.

“Films are not always about box office. Dev Entertainment Ventures has backed projects like Habu Chandra Raja Gabu Chandra Mantri. I have known Ram for a long time and I have faith on him. Binodiini is such a project, which I know will forever stay with the audience” – Dev

Proud and Honored to be associated with such a Prestige Project which unfolds the life of the Legendary Theatre Actress Binodini Dasi!
Here's Presenting to you #BINODIINI 🙏🏻
Hope to have your blessings along this journey.@RukminiMaitra @Ramkamal @DEV_PvtLtd @sarbanitweets pic.twitter.com/qy7XD2d772

Prateek Chakravorty, grandson of veteran filmmaker Pramod Chakravorty of Pramod Films in Mumbai, is all praise for Rukmini. “Rukmini has put in so much dedication in bringing the character alive for a teaser shoot, says a lot about the efficiency of the entire unit,” he said.

Shhailendra Kkumar from SS1 Entertainment has a personal connection with Bengal. “Since I am a singer and a composer, I have always admired Bengali art and literature. I have been associated with director Ram Kamal Mukherjee since his directorial debut Cakewalk, and I knew that he wanted to make Nati Binodini for the last two years. When he narrated the story and showed me Rukminiji‘s image as Chaitanya Mahaprabhu, I knew this film would become special,” he said.

Young producer Suraj Sharma, P K Entertainment, said he connected to the story of Binodiini Ekti Natir Upakhyan and he is sure the film will connect with every women who faced oppression from the “male chauvinist society.”

To be shot in Bengal and Varanasi, Binodiini Ekti Natir Upakhyan will be released next year on Bengali New Year.