Saving water- a mission that demands participation from all quarters 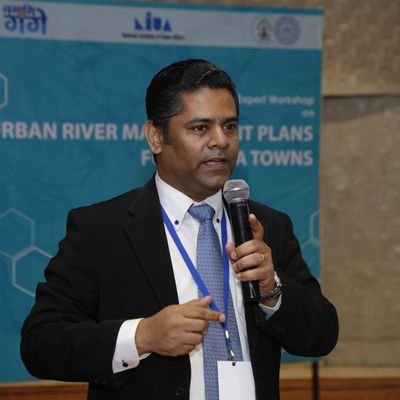 Urban river management plan has been developed for all the rivers in India. It is mostly confined to the Ganga basin in association with the National Mission for Clean Ganga. Since rivers are not confined to any specific area rather they are spread across for hundreds and thousands of kilometers, hence cannot be managed in isolation but together. Every city will have to play its role individually. Through this urban river management there is a common agenda for each city that they have to follow to protect and conserve the river basin. Concerns are related to conservation of water bodies, reviving water bodies and many more. Some of it is related to economic benefits and social benefits as well. Every city needs to adopt some of these agendas at an individual level so that some consistency is maintained ensuring that the total system is being taken care of.

In an interview with The Optimist water conservationist and activist Victor Shinde shares insights on this topical issue. A civil engineer by profession, Shinde studied environmental engineering as a part of his curriculum. He took it up initially as it was one a high scoring subject. But later it captured his interest and motivated him to take up environmental engineering and get introduced to water management which was a mix of engineering and technical approach.

According to Shinde in the last 5 years large strides in technology have been seen in the way water resources are managed using GPS and GIS and satellite data to monitor water quality. “We no longer travel to places physically to monitor water bodies. However, proper research needs to be done as there lies a huge gap between research and implementation. Hence, we need an active research plan to actually go ahead with the process of implementation,” he said.

Currently, we have a long way to go before we can actually call ourselves self-sufficient in water resources. However, the Jal Shakti mission is a great step to revive water harvesting through natural ways. Also we need a specific drive to inculcate water sensitive behaviour amongst citizens.

“We might have fancy water missions and plans but at the end it boils down to how well it is accepted by the citizens. They have a huge role to play. So citizen movement is required. Secondly the way to conserve water is to realize that water is finite and it will not always stay forever. So we need to realize that we need to change our lifestyle pattern to address this rising concern. Also we can focus on using waste water but people do not want to use it due to various perceptions. Singapore has enough water but they have been using waste water after doing a lot of treatment and only then  did they gain the public trust. We can try with that also,” shared the activist.

“Development must be focused on water availability, for instance, there was a barren land towards the west which was initially reserved for urbanization. At that time it was planned with high FAR which indicates the extent of development that can take place. The authorities later realized that there was not much water so they had to bring down the FAR. So this is the agenda populated cities and countries are following,” he added.

Yamuna features in our master plan. There are different use zones and conservers are assigned for different use zones as in if there is a separate set of criteria attached to different use zones so there is flexibility and ambition to control and to conserve the activities in the use zones which are done in the river and in the flood plain. “We have advocated a 300 meter buffer on either side of Yamuna to protect the river from detrimental activities and also from protecting the city from floods. The 300 meter stretch would be lined with trees. Also, there are many agencies working on Yamuna who remain confused as to what each agency is doing. Hence, we have assigned a nodal agency, the Delhi Development Authority, who looks after all the works happening over Yamuna and the flood plain which ensures consistency and accountability of the same in terms of conservation of Yamuna,” share Shinde.

Role of people in water management

No matter what citizen friendly steps we ensure to conserve water it ultimately boils down to citizens as to how they conserve water. Shinde said, “All they have to do is prevent wastage. Kids have to be taught the same and sensitization of parents is also important. Secondly, citizens need to understand that treated wastewater must be used optimally for various purposes such as horticulture, as fresh water is limited.”