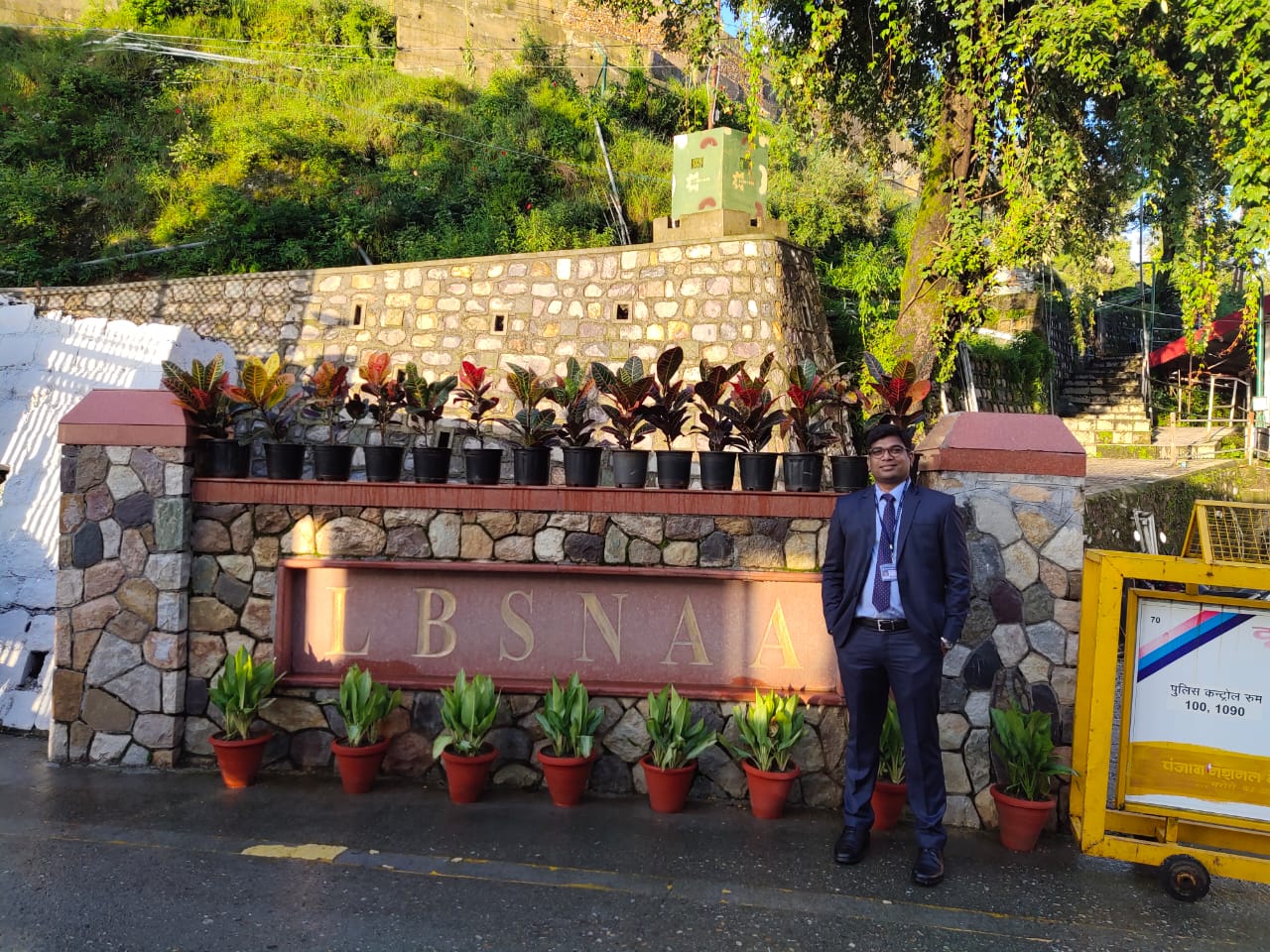 Many of us must have watched the popular TV show, Aspirants, based on the lives of a group of three friends preparing together for UPSC. Many quote that the success rate of clearing the UPSC is just around 0.1 percent. Some brilliant minds do clear the exam in their first attempt. However, some show courage, determination and dedication for years to make it to the final list. The story of Riyaj Ahemad is one such.

Riyaj was an alumnus of Bytco College, Nasik. He was a student leader in college and had been elected as General Secretary. Though student leaders usually pursue their career in politics, Riyaj’s parents advised him against this. Subsequently, Riyaj decided to channelize his leadership qualities in the administrative field by being an IAS officer.

Fighting till the end

The journey to crack the UPSC is a long haul. Candidates have to go through a three-tier examination: the preliminary test, the main examination and the interview. Every attempt at UPSC costs a year for aspiring candidates. However, Riyaj remained resilient and emerged successful in his fifth attempt.

He started preparing soon after completing his post-graduation in Organic Chemistry. In his first two attempts, he could not clear the preliminary exam. “In the first attempt, I was not able to grasp the pattern of UPSC. So I could not score well.”

The nature of questions asked in UPSC is dynamic. Candidates are expected to have a clear conceptual understanding of a vast range of subjects, be updated with current events and have informed opinions on an array of issues. Candidates needing hand-holding to be familiar with the pattern of questions of UPSC usually enrol in coaching institutions. Riyaj too decided to join Jamia Millia Islamia (JMI) Residential Coaching Academy at Delhi.

The Centre for Coaching and Career Planning at JMI conducts free coaching programmes for aspirants belonging to SC, ST, Women and Minority communities who wish to compete for a variety of jobs, both academic and administrative. Though Riyaj got the much-needed support from his teachers for his next attempt at UPSC he could not clear the preliminary test by one mark.

However, Riyaj did not lose hope and continued with his preparation. Studying in a group often offers support for UPSC aspirants. It helps you to compete, work on your shortcomings and also offers an avenue to exchange thoughts. In his third attempt, Riyaj decided to study in a group. He got together with three other friends and chalked out a strategy. This time Riyaj qualified his prelims and mains, but he was the only one in his group who could not ace the Interview. “It was a big blow for me and shattered my confidence,” he shared.

However, his friends had supported him and encouraged him to keep trying. “All my friends asked me not to be demotivated and gave me the strength to start preparing again,” he shared. Riyaj picked up his pieces and started out once more. Unfortunately, in his fourth attempt, he could not clear the mains.

Left heartbroken, Riyaj thought of giving up. However, his parents persuaded him to give him one last try. Finally, in his fifth attempt, he emerged successfully. Today Riyaj Ahemad, IAS is posted as the SDO of Khunti at Jharkhand.

“I have failed in UPSC four times in a row. My parents have been supportive throughout my journey. They have always stood by me and believed in me,” Riyaj Ahemad shared.

Looking retrospectively to the days of preparations fills him with immense satisfaction. “Today I have got my own office, my own team and I am in charge of my subdivision. I have the power to bring about a positive impact on the lives of people. When I look back at those days of preparation I feel I had been working hard for this day to come,” he shared.

Sayyed Riyaj Ahemad who is a 2019 batch IAS officer of Jharkhand cadre completed his training a month back. IAS probationers go through a two year a long training program which consists of a Foundation Course for 100 days, a Phase 1 training for 5 months, 1 year of training at the district level, followed by Phase 2 training for one and a half months.

“At the district-level we get posted on the field where we get associated with other offices and take on different charges like that of Tehsildar, BDO and SDM,” Riyaj Ahemad, IAS informed.

LBSNAA or Lal Bahadur Shastri National Academy of Administration at Mussoorie is a dream place for every UPSC aspirant. “It has maintained the aura of the place and provided all inputs that are needed in the field postings. The Bharat Darshan helps us build a network with the Army, Airforce, various PSUs and NGOs. The Himalayan Trek prepares us for both physical and psychological endurance,” Riyaj Ahemad, IAS informed.

The pandemic added a new challenge to every civil servant and even new recruits of the 2019 batch had to shoulder the responsibility. Riyaj Ahemad, IAS had been in training at Mussoorie while the national lockdown was announced last year. During the first wave, he had to travel all the way to Ranchi by road on the 15th of May, 2020.

Riyaj had been posted as the Assistant Collector of Giridih when India started preparing for the pandemic. Though Giridih did not report many Covid cases, it faced the issue of the influx of migrant labourers in the district. Riyaj Ahemad informed that more than 2 lakh individuals came in through the Shramik trains at four stations from various parts of the country. The district administration had to facilitate their transport to their respective districts and blocks and had to ensure they remain quarantined for 14 days and do the test if they showed symptoms.

Initially the district administration had to improve upon the testing infrastructure as well. A decentralized approach was followed in which panchayats were empowered to quarantine and manage the situation comprehensively.

During the second wave of the pandemic, there was a need to manage the supply of medical oxygen in many states. Ranchi being the capital of Jharkhand faced a huge surge of Covid cases. Riyaj Ahemad, IAS was in charge of logistics and he also managed the supply of medical oxygen was a major responsibility that he had to shoulder. “Every half an hour we were taking the status of oxygen for the state and had to be on call most of the time. It was a tremendous responsibility. Any mistake from our end could cost someone’s life,” he shared.

Talking about his learnings during those days, he said, “Early planning and management helps a lot. Even if cases go up it leaves us space to be in control of the situation.”

Riyaj Ahemad has recently been posted as the SDO of Khunti. Since Khunti is relatively underdeveloped and has a history of the Pathalgadi Movement, maintaining law and order in the district is one of his primary responsibilities now.

Khunti is also one of the Naxal affected areas of India and the newly appointed SDO intends to deal with this problem through a positive approach and engage with the community.

The SDO has also taken on the charge to improve the agricultural income of people as well. “We are now experimenting with many alternatives like strawberry production and building Farmer Producer Organizations (FPOs), especially in the tribal areas,” Riyaj Ahemad said.

Riyaj and his team took the help of the community leaders to propel the vaccination drive in the district. Riyaj Ahemad informed, “The district administration has engaged with the Mundayak or tribal leaders, teachers and religious leaders, for this purpose”.  He also added, “Teachers are the most connected and respected individuals in the community. Since many of the tribal people are Christians, we have also engaged with the Fathers. All of them have come forward in the vaccination drive. Notably, there are many villages in which 100 percent of the eligible population have received their first dose.”

“We usually tend to expect a lot from people in power. As an IAS officer, you have to put some extra effort beyond your capacity to fulfil people’s expectations. This ensures that the aura of the service is maintained,” Riyaj Ahemad IAS shared.

Physical fitness is important to Riyaj. “There are long meetings and long travels which require you to stay fit,” he added. He is an avid reader as well and says reading helps him expand his horizons and also during his fieldwork.

It is true that many do not make it to the final list in UPSC but one should have the willpower to put up a fight till the end. For all the future civil servants out there this young IAS officer shares an important message – “Do not get demotivated. Find some motivating factors that will help you to forget the failures. Even if you do not qualify, you will learn a lot in life from your preparations. However, it is important to keep on trying. Your time will come!”