More
More
HomeEntertainmentHumans of Kolkata: This is how Good Samaritans are helping sex-workers amidst...

Humans of Kolkata: This is how Good Samaritans are helping sex-workers amidst pandemic 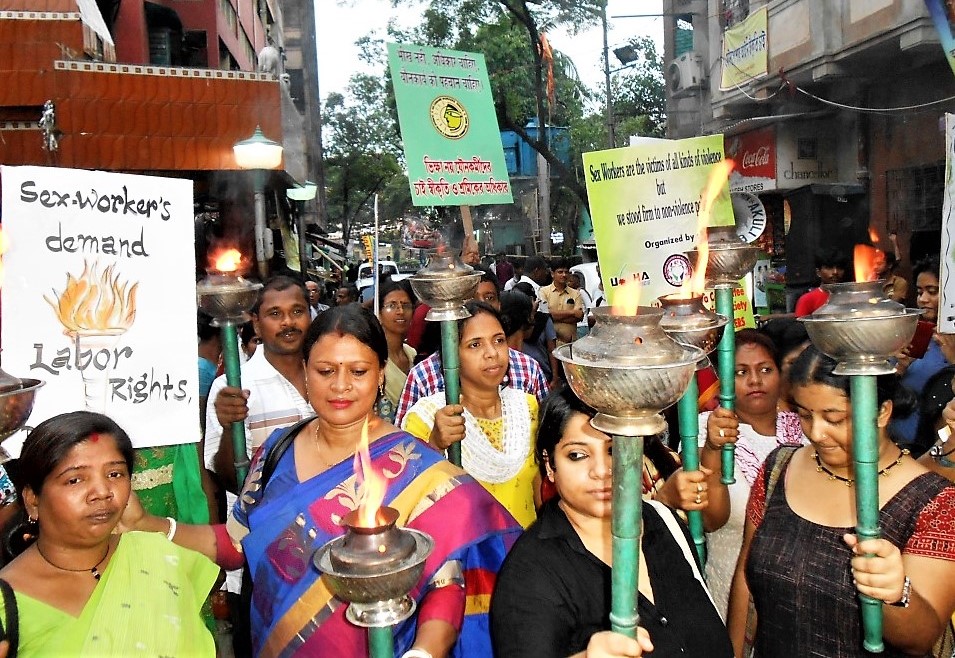 We fought COVID19, we took precaution, and we survived. What about the sex workers and transgender? How many of them survived? Safe at home, avoiding social contact, the educated middle class and upper class sections of the society had a more or less smooth transition to the new normal. In contrast the sex workers and transgender had to accept tremendous hardship including going without food for days. They had no way of earning as social distancing was being maintained for safety. Covid affected all kinds of industry more or less but this industry where sex workers are seen as a slave went underwater. The only way a transgenders earn is by asking for money from commuters at the traffic signals. With roads going empty out of virus scare, they too had to suffer a lot.

Working towards changing this sad lot for sex workers and transgender community and establishing their rights to get treated for COVID19, Durbar Mahila Samanvyaya Committiee (DMSC), an NGO, has started a focused mission in which sex workers of Shonarganchi were recently helped medically and physically by the Calcutta Police Club. The NGO joined the movement ‘End Slavery Now’ launched in 2009 by Lauren Taylor in Washington DC, with four features:  an action database, an organization directory, learning resources and store.

In most cases poverty forces women to take up a sex worker’s job. Not only the customers abuse them, the pimps on whom they depend, also do the same. However, things are changing as they are now being helped by NGOs and police administration not only in fighting the virus but also in procuring food.

As we know the vaccine has been rolled out and already some known figures took the shot, it is slowly making progress towards reaching the public. Will the sex workers be able to get the vaccine? What will be the process for them? These questions are yet to be answered.

Founder of Durbar and heath scientist, Dr. Smarajit Jana, opened up about the problems faced by the sex workers during COVID19. The confinement zones which held near Shonarganchi, stopped the sex-workers from getting out which according to Dr. Jana was another big issue as it stopped them from procuring provisions. “Initially nobody provided them with masks and sanitizers. However, eventually Durba and Usha designed masks and distributed, which helped them immensely,” notified Dr. Jana. Calcutta Police Club helped Durbar to distribute dry rations for 18 to 20 times in two months. The new normal for sex workers will be to check customers with thermal gun, use sanitizer before and after. The sexworkers are also told to take a complete bath and wear clean clothes, after the day’s work. Also, customers with symptoms of COVID19 like cold, fever or cough should not be entertained.

When asked about vaccines for the sex workers, Mahasweta Mukherjee, Advocacy Officer of DMSC shared that the corporation from ward 18 had organized a session of getting the vaccine shots, where many sex workers have already got the shots.

Dr. Jana started the vaccine process before they rolled out here, because he is in touch with WHO (World Health Organization). MLA Sashi Panja, Minister of Women and Children Welfare, has also helped Durbar conduct the campaigns. Following a list of 1400, team members of Durbar knocked every door in Shonarganchi, to offer service including food. Not only in Sonagachi of Kolkata, but in red-light areas all over West Bengal was taken care of by Durbar.

Many other private organizations have also come forward, of whom Ramkrishna Mission played a pivotal role in providing relief. OC debashish bhattacharjoo also took part in the relief. Calcutta Foodies Club was present as well. Students group from Bangalore, Calcutta University also helped share the burden by supplying food to the needy.

Secretary of Durbar, Kajol Bose, who is a sex worker as well, was interviewed in which she shared, “Discussion related to second phase of vaccination is in the process. In the period of lockdown only two sexworkers were infected in overall west Bengal, one in Shonarganchi and the other was in Chetla.

It is heartwarming to see the work done by Durbar and team and to know that for these kind souls vaccinations will start shortly and everybody from the red-light areas will be tested and vaccinated.