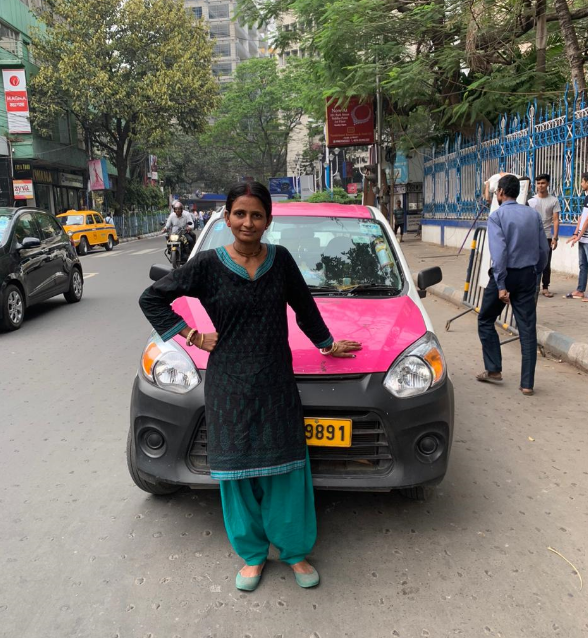 It is common to see a man driving taxis and cars which are part of the app cab services. However, Shankari Haldar from Kolkata proved it was not about gender, by riding high on her dreams and taking to the wheels of her pink cab.
As a mother, Shankari’s daily routine is to send off her children with lunchboxes to school, after which she is free to pursue her dreams. Clutching her steering wheel is the only way of looking forward to rule the roads in city of joy. She walks on the path to become the Prime Minister’s #SheInspiresUs ‘shero.’ The journey from being just a mother to an independent woman is what make her different from others and on International Women’s Day, such women inspire and encourage others like her.
Shankari’s story began in 2015 when she first time came to the city with an aim to make her son fit again as he was suffering from medical issues related to the brain. Soon she realised that just her husband day wages cannot make it possible to look after their son, so she took up half the responsibility on her shoulder.
Taking up a job as a domestic help is when she stepped out of the house to clean utensils, keep the house clean and wash clothes where she worked. Little did she know that these were baby steps towards her dream. One lady in whose house she worked at, taught Shankari how to drive after which Shankari took driving classes she started driving on the roads from 2016.

Collecting every penny through her hard work, a year ago Shankari took a loan to drive a pink cab on the road. Over the years, Shankari witnessed how bigger vehicles like buses overtake her car many a time and learned to maneuver her way through the roads. Now Shankari wants to drive a bus by holding that big steering wheel with her hands.

Sharing a story of hers, Shankari narrated how her mother use to differentiate between her and her brothers, because she was a girl and at the end of the day boys bring money back home. Her mother use to serve big and tasty fish to her brothers while the leftovers were for her. This made Shankari determined to erase all gender barricades and step into a male dominated environment, where she would do all the work done by men especially. Shankari who use to practice the traditional Indian style of bharatnatyam dance day and night but was asked to remove her ghungrus at the age of 12 to take over responsibilities of a homemaker. At the age 15 her first child was born which gave a halt to her dreams.
Shankari did not let disappointment bring down her spirit. Coming back strongly, Shankari now believes that ‘if there is a will there is a way.’ Her day remain incomplete if she does not drive and she has made her passion her means of earning her livelihood. Shankari could not be happier that things have turned out this way.