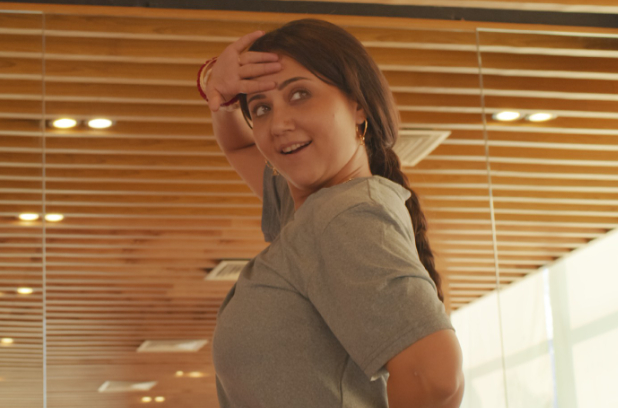 Housewives. They are possibly the most misunderstood lot. Kids don’t do homework properly, blame the housewives. The shirt is not pressed or, the food is not on table on time, you know whom to blame. We also harbour a few misconceptions about them like they have no ambition or connection with the so-called “real world.” Basically, they don’t have a life outside home. All they want to do is spend time raising their kids and doing household chores. At times, we perceive them as ‘trophy wives’, think they are submissive and dependent without realizing that running a household is not for the faint hearted. To them, it’s easy being a housewife.

Director Arjunn Dutta’s Shrimati shatters these misconceptions and handles an “everyday” story with sensitivity. His Shrimati like many housewives enjoys her lazy, power naps near the window in the afternoon, occasional reads of the film magazines and her banter with her ‘woman Friday’ Kajol (Kheya Chattopadhyay)? But then, the extra pounds bother her, especially when she is mocked by swanky Mallika (Barkha Bisht Sengupta).

Also read: Swastika Mukherjee is back as ‘Shrimati’; to hit theatres on July 8

Arjunn’s Shrimati scores on the believability factor. You might have seen or heard of a Shrimati, which makes the film so relatable. So, you know what Shrimati feels when her blouse doesn’t fit her or her husband Anindya (excellent Soham Chakraborty) asks her to do warm-ups at times.

Coming from an affluent family, Shrimati (the powerhouse Swastika Mukherjee) finds her freedom in cooking. It’s her escape route. Thankfully, Arjun didn’t go the stereotypical way to showcase Shrimati’s in-laws. So, there’s no evil mother-in-law (Debjani Bose) or ever-plotting sister-in-law (Trina Saha) here. The entry of flashy Mallika jumbles her life. Barkha is on point as a typical “gold digger” and is refreshing to watch after a long time.

Arjunn knew he was telling an “everyday” tale of a woman and he played his cards well. Here, the ‘cast’ is his ‘trump card’. None but Swastika can play Shrimati with such vulnerability. Be it Paatal Lok, Tasher Ghawr, Saheb Bibi Golaam, Take One or Mohomaya, Swastika has always been known for her rebellious attitude both on and off screen. But there’s also a part of Swastika that’s delicate, candid and at times gullible. Much like Shrimati. Maybe, that’s why when she says, “Bari chol baachbo na (let’s go home, we will not be alive) after watching Sudarshan take Bollywood dance classes) or her parbo na (can’t do),” are so uniquely Swastika. Her portrayal of Shrimati is sensitive and nuanced. Watch out for her expressions in the scene where she tumbles in the party. The emotionally-charged moment is heartachingly beautiful. Arjunn knew Swastika would make Shrimati “her own” and that she has.

Swastika found an able supporter in Soham as her on screen husband. Kudos to Arjunn for the casting here. The director deserves an extra point for the way he used their age difference to their advantage. The reviewer did like the ‘didi-bhai’ teasing in the bedroom.

However, the film isn’t without loopholes. Time and again, Shrimati speaks about popping contraceptive pills to fulfill her husband’s wish. However, the director never addresses this issue, which, indeed, is important. Also, Shrimati is in a happy marriage so, the reviewer fails to understand why she seemed so flummoxed when the gym instructor (Uday Pratap Singh) meet her at a coffee shop.

Supratim Bhol’s camera flows so easily and presents you with the best frames even in the indoor shots. Soumya Rit’s composition of Shon Shon has our heart especially with Somlata’s soulful voice.

In a world full of pretenders, Shrimati reminds us why we should often look at the mirror and admire oneself. The more we look at ourselves in the mirror, the more we will love ourselves, understand ourselves and the less upset, confused and frustrated we will be in life.