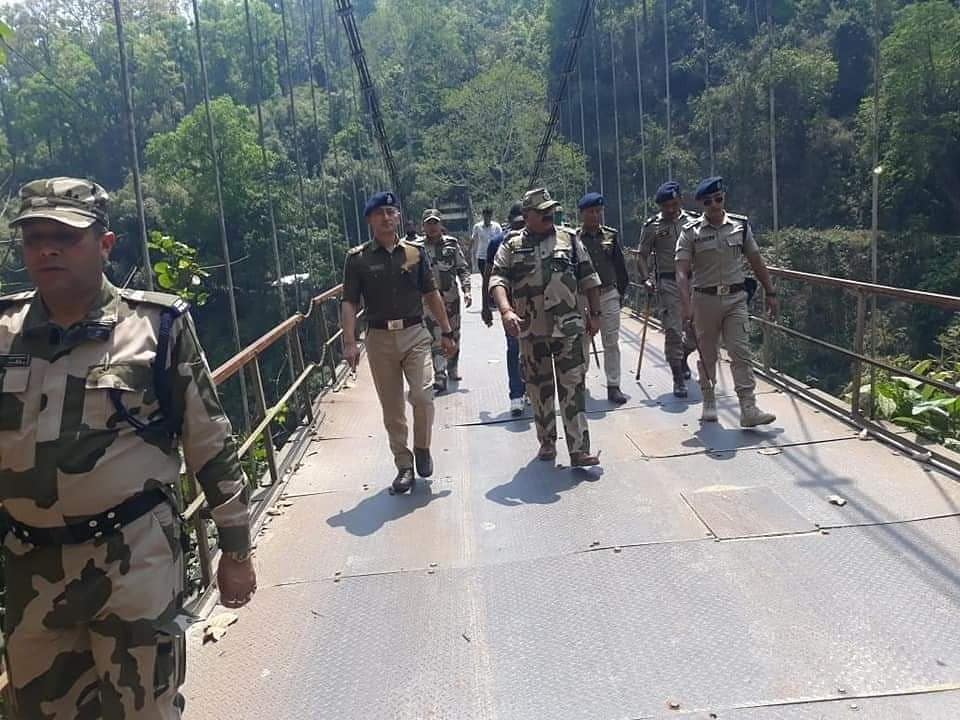 In a small north eastern state like Sikkim which is strategically located between China, Nepal and Bhutan maintaining the internal security of the region assumes prime importance. Hence the police force who mans this hilly territory need to be on vigil, be visible and work in tandem with the citizenry.

Tourism acts as a propellant of economic activities in Sikkim. It is a source of revenue for the state and promises huge employment opportunities for the local youth.

According to Shri A. Sudhakar Rao IPS who is the Assistant Director General of Police, Gangtok, “We have a robust policing system in all border areas. We have check-posts at every strategic location. With the help of modern technologies we can help in assisting people in distress especially during natural disasters like landslides and avalanche.”

As the world turns digital, white collar crimes have surged. The National Crime Records Bureau record shows that India recorded 4,4546 cases of cybercrime in 2019 as against 28,248 cases in 2018. In 60 percent of the cases, fraud was the motive followed by sexual exploitation and disrepute.

In the small north-eastern state of Sikkim which is usually not cluttered with large scale industries and is a tourism hub, digital payments have increased manifold. Sudhakar Rao IPS said, “With increase in digitization the rate of frauds are going up.” The Sikkim Police has taken up awareness campaigns to educate the public about possible cybercrimes and asking them to be vigilant. The CID has also launched many initiatives about the same. They are interacting with the public and periodically advertising on print or radio.

In 2019 the Ministry of Home Affairs had mandated all mobile phone manufacturers to install the feature of a panic button in all mobile handsets so that people, especially women, can use them in times of distress.

The Emergency Response Support System (ERSS) is a single number based emergency response system. It is globally recognized and used by most European and Commonwealth nations. Citizens need to dial 112 from their mobile phones in case they need emergency assistance from the Police, Fire or Health Departments. In India this project is run under the Nirbhaya Fund Scheme in coordination with the Ministry of Women and Child Development. Emergency Response Centers in States or UTs respond to distress calls through computer aided dispatch support systems.

Sikkim Police has strengthened this system to connect with the citizenry especially during the pandemic. When people dial 112 they are connected to the police control room and the police respond immediately. The geo-location of the person calling is shared to the nearest vehicle which is equipped with Mobile Data Terminal or MDT through which the police can access the picture of the location and their vehicle is guided to that place with the help of the navigation system.

“Gone are the days when people used to come to the police stations to lodge their complaints. Today the police need to go to the public,” Rao, IPS, shared. Though ERSS had been present for a while, currently, on account of COVID, locating the person in distress and reaching out has now become our priority. The Ministry of Home Affairs has sanctioned funds for the system and it has proved its worth during the pandemic.

The Sikkim Police Communication Branch came into existence in 1970. It was previously known as the Wireless Branch and Police Radio. With passing time it has started using high-end technologies like GIS maps, digital mobile radios, automatic location logging, POLNET which is a police communication service and many more. Recently an updated POLNET 2.0 was commissioned by the Union Government which has a multimedia facility and a satellite based network that provides video, audio and data connectivity. It proves a boon during disasters when regular modes of communication do not function.

In the Sikkim Police Communication Branch where most of the technology is used, young candidates who have passed plus two with Physics, Chemistry and Mathematics as their subjects or engineering graduates and even diploma or degree holders are recruited and trained in high-end sophisticated cyber technologies. “They form the backbone of the system. Thanks to good connectivity we are able to communicate with many experts online workshops, and webinars,” informed the IPS.

The ERSS has gone a long way in establishing a connection with the society at large. The Sikkim Police has also formed a system of village policing. Village police guards have been posted at many places which provide an avenue for the community to get integrated with the police and participate in governance at large.

Village police guards essentially coordinate between the police and the villagers. In Sikkim Village Guards are enlisted by the District Superintendent of Police from able-bodied persons of either gender between the age of 21-60 years and who are the permanent residents of that village. Usually they have a tenure of three years which might be renewed depending upon his or her performance. These guards maintain vigil of respective villages, and report acts of crime and suspicious activity to policemen.

Village police guards have helped the community to get integrated with the Sikkim Police and the administration on the whole. It is an effective way of involving the common citizens in participatory governance thereby making the police more accessible to the public at large.

As white collar crimes are replacing conventional crimes policing has become challenging as well. However the idea of involving people in policing, generating awareness on next generation crimes and taking policing to people’s doors has proved to be effective in Sikkim and has served as a model for other small states as well.