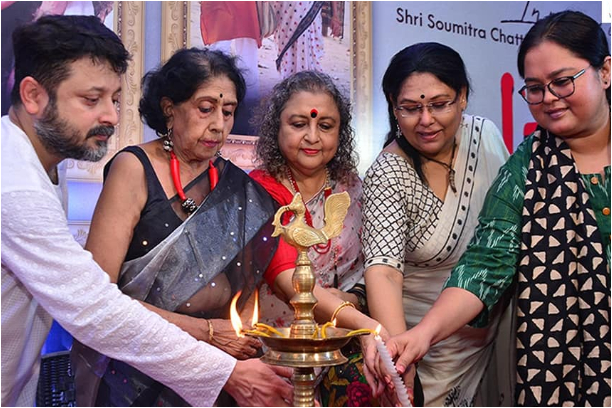 How do you tell your daughter she is growing up? She needs to open her mind, her heart and let her imaginations run wild. How she shouldn’t let the little things impact her, but focus on the big picture? How does growing up also mean sacrifices and pain? In 1978, Soumitra Chatterjee had written a letter to his daughter Poulomi Bose on her birthday. The letter finds the mention of a sari the birthday girl got as a gift.

Soumitra also wrote to Poulomi during the shoot of Satyajit Ray’s Sonar Kella from Rajasthan in 1974. He was in Bikaner. The stalwart wrote to his ‘Buri Maa’ as he fondly addressed his daughter in the letter, how he missed them all back home in Kolkata.

From Soumitra’s handwritten letters, his lifelong companion — a typewriter, notebook, collection of pipes he bought on his tours abroad to Swatilekha Sengupta’s violin, harmonica, Madhabi script which she directed and costumes she wore in her plays, there’s a profound feeling of melancholy and nostalgia at the Bela Shuru exhibition at Navina Cinema in Kolkata.

The makers of Bela Shuru paid tribute to the lead actors of the film —Soumitra and Swatilekha, both who had passed away — through an exhibition where personal belongings are on display. The items give an insight into the thespians’ life. Like a painting by Soumitra that also has his poem in his handwriting. It was a gift to his son, Sougata Chatterjee. Or the entire costume from Swatilekha’s play Ajnatobaas. It includes her sari, wig, bangles and even a comb. Another costume from Naachni, a popular play of Swatilekha, is also on display. Interestingly, this play directed by Parthapratim Deb also starred her husband and thespian Rudraprasad Sengupta and their daughter Sohini Sengupta. In Bela Shuru, too, Rudraprasad makes an appearance as one of the crucial characters.

For Sohini, the exhibition at Navina is deeply personal and also important, especially when Bela Shuru is still running to packed houses. She says she wouldn’t have parted with the “most intimate and personal things of her mother” had it not been filmmakers Nandita Roy and Shiboprosad Mukherjee. “They are like my family, so I agreed to part with the things. They said, everybody will be able to see the things my mother used,” she says.

Swatilekha had studied music at Trinity College. An expert in violin, the veteran actress could play a range of instruments. Sohini recalls how her mother used to practice violin almost every day. “Later, when she had diabetes, it became difficult for her to play. She switched to harmonica. We might have bought the harmonica from China. She could also play the esraj, piano and guitar,” she says.

Sohini also remembers how she once asked Soumitra how his handwriting resembles Rabindranath Tagore. The legend had said he practiced it during the shoot of Satyajit Ray’s Charulata (1964).

Sabitri Chatterjee, who was the chief guest at the Bela Shuru exhibition, became nostalgic. She said it is difficult to talk about a friend, guide and companion as close as Soumitra. In several interviews, Soumitra had mentioned Sabitri is his all-time favourite actress.

For Poulomi, it was an emotional moment. Ever since Soumitra passed away in November 2020, Poulomi had lived with his memories. “I agree with Sohini. I could handover the most personal belongings of baba (Soumitra) just because I could trust Nandita di and Shibu,” she says.