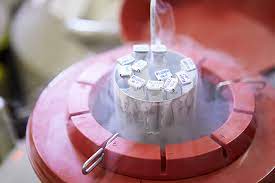 Sperm banking is a revolutionary method in the field of medical science and is effective in saving lives especially those with testicular cancer. Let us understand this emerging technique well.

What is sperm banking?

Sperm banking or gamete cryopreservation is the process of cooling and preserving of semen at low temperatures for a prolonged period of time. This method is usually preferred by men when faced with the chance of losing fertility.

With fertility rates taking a downward plunge, especially in metro cities of India, sperm banking is emerging as a viable alternative. In modern times, when couples choose to conceive at a later age in their life, that is when sperm count naturally drops, sperm banking can work wonders. However, India is ridden with societal taboos and this new method of sperm banking is only resorted to as a last option.

Sperm donation is also often looked at with suspicion. To make this sector commercially viable it is necessary that people come out of this stigma and treat it as a necessary procedure quite similar to the process of blood donation. People also believe that they won’t be able to connect with their child since they will not be their biological fathers.

Men diagnosed with cancer like testicular and prostate cancer, as well as Non-Hodgkin’s disease, usually choose to bank their sperm. There may be other reasons like undergoing vasectomy, travel, serving in the military, and those opting for gender reassignment.

Doctors suggest that even those with low sperm count or quality should also opt for this method. One case in point is that of 32-year Sujan Naskar who had progressive left testicular swelling.

Dr Suvadip Chakrabarti, Consultant Surgical Oncologist at Apollo Multispecialty Hospitals, Kolkata, informed the patient that he had testicular neoplasm (cancer), which is rare but curable if diagnosed at an early stage.

At Apollo Multispecialty Hospital, Dr Chakrabarti introduced him to the concept of sperm banking and advised him to start cancer treatment at the earliest. Naskar’s family agreed and contacted Dr Arindam Rath from Apollo Fertility, Kolkata, and initiated the process. Eventually, Naskar’s Left High Inguinal Orchidectomy was performed on June 9, 2021. He has Seminoma of Left testis, which is a painless lump or swelling that originates in the germ cells of the testicle. He will soon undergo Adjuvant Radiation and Chemotherapy.

Dr Suvadip Chakrabarti said, “Delaying cancer treatment is never a good idea, as it brings in more complications like the cancer spreading further in the organ as well as affecting other organs. In cases like Naskar’s, it’s always advisable to opt for preserving sperms and beginning treatment at the earliest.”

“With modern facilities like sperm banking, men can store their sperms for later usage, be it preserving quality sperms of younger age to be used later or for treatments like this. This facility is also very useful for men who don’t wish to be a parent early in life. Sperm banking is very useful for them as well,” added Dr Arindam Rath of Apollo Fertility, Kolkata.

How to be a sperm donor

There are certain medical prerequisites to be a sperm donor. First, a person must have a high count of sperms and their sperm should be of high quality as well. Secondly, he must be free from diseases. Thirdly, his age should be more than 21 and less than 41 years. Some clinics are also known to ask about details of the person’s height, weight and other medical and physical details.

The most important provision is the aspect of confidentiality and maintaining the privacy of both parties. A sperm donor is not allowed to meet with the people to whom his sperm will be given. Similarly, the people who use donor sperm are advised not to come in contact with the donors.

It is important for Indian society to get rid of taboo and adopt this scientific marvel with an open mind.