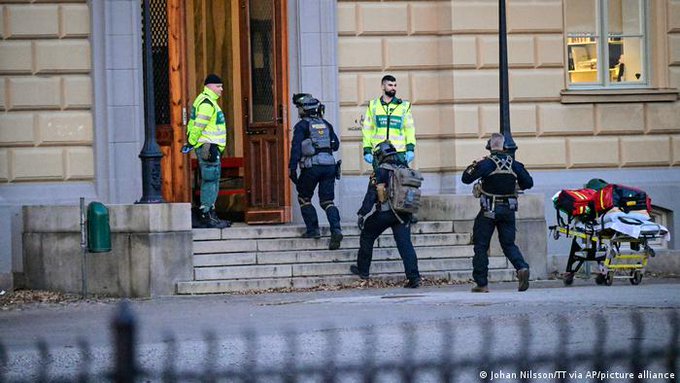 Stockholm: Two women died after being “subjected to violence” at a secondary school in the southern Swedish city of Malmö, police said on Tuesday. Both the women were in their 50s.

An 18-year-old man, who is a student at the school, has been arrested on suspicion of murder, officers told BBC. Police said there were no reports of gunfire.

The two women, who worked at the school, were taken to hospital by ambulance but could not be saved, reports BBC.

Around 50 people, both students and teachers, were at the school when the incident took place, with police receiving reports of a “suspected serious crime” shortly after 17:00 (16:00 GMT) on Monday.

“It is with great sadness that we can state that two people lost their lives in this terrible event and our thoughts go to their relatives and friends,” said Malmö police chief Petra Stenkula.

The alleged attacker was armed with a knife and an axe, according to Swedish media outlets. He is said to have called the emergency number and admitted to having killed two people.

Police evacuated the school and searched its grounds, but found “no indication” of any more perpetrators, police said.

Teachers and pupils told local media police entered the school with their weapons drawn and ordered them to remain locked in their classrooms for several hours.

The school remained cordoned off with police tape several hours later, with numerous police cars and ambulances still at the scene.

“This is absolutely terrible,” head teacher Fredrik Hemmensjö told the Aftonbladet newspaper, saying there had been “deadly violence” at the school.

Officers said they were still trying to work out what was behind the incident.

“Now a great deal of work awaits to be able to understand what happened and the underlying motive for this terrible event,” said Malmö north police chief Åsa Nilsson.